Devils delves into the dull swamp of wealth, sharp suits and plush but soulless offices 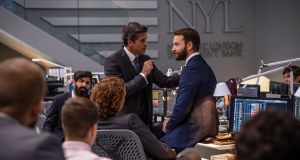 Devils (Wednesday, Sky Atlantic) begins with Patrick Dempsey, who played hunky John D Sexdoctor in Grey’s Anatomy, as a scenery-sucking baddie. We know he is a baddie because he has a white streak in his hair like Cruella de Vil and is telling a room full of people with suits about his evil scheme.

This isn’t the actual dialogue. I’m just paraphrasing because what he says is very longwinded. Reginald B Hunkface is played by Alessandro Borghi, and his character’s actual name is Massimo Ruggero. He is the hero/antihero of this programme. We flash-back to a busy trading floor. Everyone is running around, typing frantically or yelling into the phone.

In the middle of the floor stands Massimo. He instructs. Numbers fly across the screen. ‘That’s some damn nice financing,’ he says, calmly, from his square, beard-clad jaw

“Finance!” screams one person down a phone.

In the middle of the floor stands Massimo. He instructs. Numbers fly across the screen. “That’s some damn nice financing,” he says, calmly, from his square, beard-clad jaw.

Then we cut to everyone clapping. “We have won at finance!” they agree. Meanwhile a man is falling from the top of the building. Seriously. “In Mad Men this was just a metaphor for existential angst!” he screams. “But this is a far less subtle show than Mad Men!” Then splat.

Again, I’m paraphrasing. The real script has Massimo saying: “They say the devil’s greatest trick is making us think he does not exist. I have drunk his wine, laughed at his jokes. I have looked into his eyes and seen the terrifying blackness of my own soul, reflected in his.” Yes, Massimo, we all know who Noel Edmonds is.

What I wouldn’t give for some Dalmatian-skinning hijinks right about now. This is another of those drama series that are ostensibly critical of rich-folk shenanigans while also being completely seduced by them. There is an overly familiar ominous electronic score. There are plush but soulless offices and apartments.

The finance particulars are that they have been shorting the Greek economy. At one point a businessperson explains to another businessperson what short selling is, just to make sure everyone is up to speed. This is like a show about bakers in which one baker says to the other baker: “A cake is made of flour.”

We know high finance has huge and damaging real-world consequences, but the details are so boring. I mean, we all want to help save the world, but not if we have to do sums

That businessfolk are regularly presented in television and film as morally compromised baddies is really a sharp con. Such people might be nefarious but they are also presented as hypercompetent, in control and leading wonderful lives. Mark Fisher wrote about this in Capitalist Realism: the subtext of these stories is that there is no other possible system and, really, who wouldn’t want to be Scrooge McDuck?

High finance in drama is the worst of all, because while we know it has huge and damaging real-world consequences, the details are so boring. I mean, we all want to help save the world, but not if we have to do sums. So programme-makers who delve into this murky swamp focus instead on narratives of pseudoscientific magical thinking and wizard-like genius and great sickening mounds of gold. Scorsese depicts Jordan Belfort in The Wolf of Wall Street as an immoral fraud, but young men still flock to Belfort’s events because he also had a very big boat.

There are noble exceptions in televisual depictions of wealth. One reason that Succession, Jesse Armstrong’s HBO drama about a billionaire media dynasty, is so good is because it refuses to buy into rich-person propaganda. In Succession the lives of the super-rich look absurd and horrible. Armstrong’s main characters are presented as the ridiculous products of a genetic lottery, hilariously bad at their “jobs” and deeply unhappy. If you watch Succession and want to be one of the people in Succession, you are broken.

Being a very rich person is more pleasant than being a poor person, but it’s not really more pleasant than being a bit above-average in a functional social democracy. Many happiness studies back this up. This is why so many of the super-rich are invested in policies that destroy the middle class and create more poor people. Basically, they can go on a helicopter but not to the park or the library or the zoo. I mean, they can buy a zoo if they like, but then they will have to sit in it all alone feeling mocked by the monkeys. That’s probably why they are such tax-avoidant dicks actually, the monkey-mockery.

Okay, this is a big digression.

While Succession refuses to take rich people seriously, Devils takes them very seriously indeed. Massimo hires a young student to hack stuff and spy, invites a “blogger” to his horribly soulless apartment for no good reason, tracks down his troubled wife and undermines a rival by sabotaging a big deal. And he sure finances good. He finances the heck out of things. But sometimes Massimo must look at the finance he has financed and wonder: “What am I even financing for?”