Martin Scorsese says we are overusing the c-word (no, not that one) 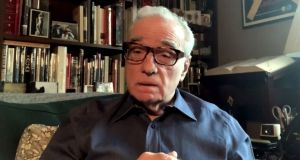 Director Martin Scorsese: ‘[Old films] are among the greatest treasures of our culture, and they must be treated accordingly’. Photograph: NBC/NBCU Photo Bank via Getty

If you dipped into social media this week you could be forgiven for believing that Martin Scorsese was under attack from a legion of detractors. Look closer and you would have discovered those defending him hugely outnumbered those taking him to task. Twitter is often swamped with righteous yelling at largely invisible enemies.

Anyway, Scorsese’s essay in Harper’s magazine — ostensibly on Federico Fellini, but wide-ranging — was a fount of wisdom and coiled wit. He was particularly sharp on the increasing use of the dreaded c-word (no, not that one). “The art of cinema is being systematically devalued, sidelined, demeaned, and reduced to its lowest common denominator by conceptualization of films as ‘content’,” he wrote while talking us through the evils of recommendation by online algorithm.

Until last Monday or so, nobody spoke of films or books or records as “content” without an ironic sparkle in their eye. It was like “influencers” in that regard. By Thursday “content creator” was turning up on CVs as if this were a real thing, like speaking French or being adept at Microsoft Excel.

“As recently as 15 years ago, the term ‘content’ was heard only when people were discussing the cinema on a serious level, and it was contrasted with and measured against ‘form’,” Scorsese wrote. Since the rise of streaming, the word has come to cover, among other things, any moving image you can stick before punters in the hope they’ll notice an advertisement for stain remover in another corner of the screen. The great filmmaker mentions “a David Lean movie, a cat video, a Super Bowl commercial, a superhero sequel, a series episode”.

The word doesn’t just cover movies. It covers games, books, music, podcasts and radio programmes. It covers the column you are currently reading. You could have played Werewolf Golf 4 or listened to two men discussing every episode of The Brittas Empire, but you decided, instead, to read a whinge about the brain-flattening techniques of contemporary content-delivery systems (as I don’t call them).

Academics are now rather dismissive of Marshall McLuhan. But it does look as if the Canadian was onto something with his most famous catchphrase. In an article from 2016, Jim Euchner called up the c-word as he talked us through the theory. “When Marshall McLuhan wrote, ‘The medium is the message,’ he meant to emphasise the implications of any new technology (or medium) beyond the specific context of its use (or content of its message),” Euchner wrote.

Prof McLuhan having died some 40 years ago, there is no possibility of Woody Allen dragging him from a movie queue to call me an idiot. So I will interpret this to mean, in the current context, it matters less that the punter has something really worth watching on their iPhone — or playing or reading or listening to — than that there is enough of this something to stop them putting down the device and re-entering non-digital space.

So terrified is the streaming service of leaving you without “content” that, before the end credits of Mad Men have properly begun, you are being shuffled off to the next episode and invited to skip the opening sequence. The old analogy of trying to drink water through a firehose isn’t quite right here. The problem is not that the “content” is rushing towards you in an overpowering gush; the problem is that the supply is continuous and seemingly inexhaustible. One is either paralysed by the tyranny of choice or dragged breathless from one title to another by the “recommended for you” bot.

Scorsese implicitly argues for curation and preservation. The reduction of art to content “has created a situation in which everything is presented to the viewer on a level playing field, which sounds democratic but isn’t”. We need people like Marty to direct us towards misunderstood noir thrillers and underappreciated Italian films from the silent era. We need other experts and amateur enthusiasts to arrange the works in some digestible order. We need to stop prioritising the medium by referring to that work as mere “content”.

Scorsese understands that, when it comes to older films, the task falls to what remains of the studios: “They are among the greatest treasures of our culture, and they must be treated accordingly.”

Alas, not everyone cares. As the latest Scorsese kerfuffle started to bubble out, a related controversy breathed a little more life into it. Lexi Alexander, the popular director of Punisher: Warzone, addressed an ongoing debate about the worth of older film. “Stop jumping on people who don’t like old movies,” she wrote. “It’s such a pretentious ‘I went to an expensive film school’ thing to do. Old movies rarely hold up, plus they’re racist and sexist af.”

Alexander has a point there. I dare you to name, oh, I don’t know, 100 films made before 1960 that “hold up”. You can? Well, you must have gone to Lord Monocle’s Film Academy for Young Gentlepersons. Lend us your expertise in the war against “content”.