My fellow Irish citizens! What are you doing next Monday?

Monaco is filthy rich and hasn’t much of an army. I think we could take it in a fight 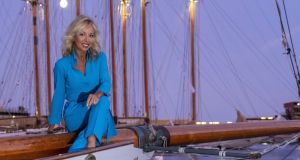 Inside Monaco: Playground of the Rich – Princess Camilla, a super lady and so supersmart and intelligent

My fellow Irish citizens! I’ve been tipped off about this place that’s filled with jewels and sports cars and red-faced men in sports coats and it doesn’t have much of an army and, well, I think we could take them in a fight. What are you doing next Monday?

The place is called Monaco, and the BBC has just been “inside” it for a programme called Inside Monaco: Playground of the Rich (Monday, BBC Two). It’s largely an excuse for an uncritically ostentatious display of wealth. There’s a hint of a raised eyebrow at times, but then it’s quickly joined by a second raised eyebrow, so the producers just seem surprised, like the facelifted people they’re interviewing.

Monaco is, you see, a bastion of entrenched privilege where residents need to have at least €500,000 in their bank accounts and the local citizenry are subsidised to keep up with the cost of living. Five minutes of this is enough to aggravate the Bolshevik in even the most centrist bourgeois journalist. I kept having thoughts like this while watching: “Nice principality you’ve got there, Prince Albert, it’d be a shame if” – pauses to tap meaningfully on a gold-plated statue – “something were to happen to it.” The programme should really be called When the Revolution Comes.

Monaco is, we are told, “a playground for the rich”, which conjures up pictures of Mark Zuckerberg laughing with joy as he’s pushed on a swing or George Soros gleefully clambering around in a ball pit or Denis O’Brien sitting alone on the depressed end of a seesaw eating a money sandwich while texting his lawyer. If only! The wealth and glamour of Monaco are fantastically boring, which is part of the reason I want to take them from the principality and give them to you.

Yes, the rich of Monaco can spend gajillions on a huge luxury boat and still end up vying for a parking space in the traffic-jammed dock. A waiter shows us a novelty magnum of Champagne that costs €28,000, but I’m sure I saw it in Lidl far cheaper. “In Monaco the helicopter is considered like a car,” we’re told at another point. This is the stupidest thing in the world given that helicopters are just loud, cramped sky-hatchbacks and Monaco is about the size of Athlone and thus surely walkable. If this choice were made because rich people had replaced their normal legs with gold bejewelled robot legs that were too heavy to move or something, I’d be impressed and feel they deserve their money. But it’s not. They still have normal legs.

Almost every rich person interviewed here talks a lot about how “safe” it is, which is, I think, code for “there are no poor people”. And yet, for all their obsessive interest in “safety”, there are certain features of nepotistic wealth consolidation that are beautifully self-destructive. My favourite bit in the first episode is when the air-traffic controller responsible for ensuring the swarm of toff-filled helicopters don’t collide with one another explains that he got the job over more qualified people because of his citizenship.

It makes me wonder about other hidden features of this affluent paradise. “I presume I will be operated on by the best heart surgeon in the world.” “Sort of, your moneyfulness. You’re actually going to be butchered by Terry here, who has passed Inter Cert biology. We know his da.”

We meet some toffs, including Eddie Jordan, hopefully there just pretending to be one of them but secretly scoping it out for us; the former Formula 1 driver David Coulthard, who adds some delicious pathos to proceedings by complimenting a fancy lady who does not respond as he expects because she doesn’t recognise him (this is a very specific sequence of emotions that should be bottled); the supermodel turned eccentric Victoria Silvstedt, who explains that she is living in a “bubble”; and the professional rich person Monika Bacardi, who liked Bacardi so much she married him, unlike your friend Alan, who liked Bacardi so much he ruined his sister’s wedding.

Later someone named Princess Camilla oversees a competition for influencers. “What I love about you is you are such a super lady and so supersmart and intelligent,” a local journalist says to her in a hard-hitting interview (also, coincidentally, quoting the editor of The Irish Times during my interview for this job).

We meet a truffle that’s worth €35,000, which means it’s on roughly the median wage and by far the most interesting participant in the whole documentary. I start daydreaming about the truffle’s day-to-day life and its politics

The being who presides over all this luxury is called Al Bear (spelled: Prince Albert), who sounds amazing until you realise he’s just this little management guy in a nice suit and not an actual bear or even a man in a bear suit. He’s just the son of Princess Grace, and he’s got the job because he’s the most genetically qualified, just like the air-traffic controller. The programme-makers get loads of access to Albert, but it’s hard to see why they bothered. He has a nice office in a castle. He signs documents. He and his wife drive around in a fancy speedboat. He occasionally looks out a window of his castle at his dominion.

We learn about royal etiquette. At a party at which ordinary folk get to meet the royals we learn that people are still seated “by rank” and that a woman may not sit at the end of a table, presumably because women attract bears (not Al Bear). We also meet a truffle that’s worth €35,000, which means it’s on roughly the median wage and by far the most interesting participant in the whole documentary. I start daydreaming about the truffle’s day-to-day life and its politics.

This is a programme that truly knows the price of everything – they stop regularly to tell us – and the value of nothing. We learn little about the ordinary Monégasque people (other than the fact they can be air-traffic controllers if they feel like it) and what they make of the uncreased, helicoptering windbags they serve.

Yes, this programme is all surfaces, presumably because if they delved too deeply we wouldn’t be permitted to see Al Bear staring out a window or being vague at a desk.

For something that goes, instead, deep into the grain of a place, I highly recommend Pat Collins’s film Tim Robinson: Connemara (TG4, Wednesday). Collins follows the writer and cartographer as he clambers through wet woods and bogs and draws maps of the places where he clambers. We get long exquisite shots of landscape – trees, sea, grass, “sky-coloured mountains and mountainous skies”.

We hear wind and rain, minimalist notes from the composer Susan Stenger and the late Robinson reading his own beautiful words over the top. It’s absolutely life-affirming. I could see the point of things again. It felt necessary because the BBC took me all the way to Monaco and all I got was a dose of class hatred and a sense of ennui.

The pandemic has split us into two distinct camps: The Couples vs The Singles

Irish writers on Election 2020: ‘I want a revolutionary party’
9

The old television that brought down one village’s broadband
10