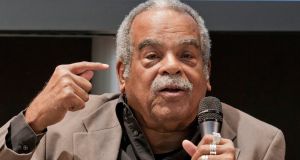 Western philosophy has had two broad strategies for dealing with racism. One is to wave away hate speak and prejudice as “of its time”. The other is to divert all discussion of the topic into the low-status realm of ethnic, gender and equality studies.

The Black Lives Matters movement has put paid to these ploys for good. No longer can one pretend that the Enlightenment figure David Hume was speaking out of character when he ranked black people as “naturally inferior to the whites”. Nor can one pass off Immanuel Kant’s lowly regard for “the Negroes of Africa” as an aberration. Nor indeed can Voltaire’s anti-Semitism and offensive baiting of non-whites be treated like a minor blip in an otherwise unblemished intellectual record.

As John Gray writes in his book Seven Types of Atheism, “Voltaire’s racism was not simply that of his time. Like Hume and Kant, he gave racism intellectual authority by asserting that it was grounded in reason.”

The Enlightenment is still regarded as a high-point in European civilisation, and the scientific and secular values at the heart of it continue to inspire. Yet the question needs to be asked: Was it also a racist project, deeply entwined with the colonial and missionary expansions of the 17th, 18th and 19th centuries?

Professor Aislinn O’Donnell, acting head of the department of education at Maynooth University, believes answering this starts with learning: Learning not only how western philosophical thought has contained a racist undercurrent but also how those outside the canon have perceived things.

One of many thinkers people need to know more about, she says, is Édouard Glissant, a French philosopher from Martinique in the Caribbean who defended one’s right “to be opaque”, or to lack transparency. Those in authority today like to pigeonhole, categorise and reduce “minorities” to subgroups. Demanding the “right to opacity” may be the first step towards dismantling this human taxonomy.

Philosophy has largely been taught through the eyes of male, pale thinkers. Is it time for an overhaul?

“However, philosophers like George Yancy, Simone de Beauvoir and Charles Mills argue that so-called ‘mainstream’ approaches to philosophical enquiry, philosophical problems, and philosophical categories are not necessarily as abstract and universal as they may purport.

“Yancy argues the dominance of a particular kind of human being in the field of philosophy – white and male – determines who gets to be ‘let in’ to philosophy, and ‘what counts’ as philosophical.

Explain Glissant’s “right to opacity” and how it relates to the Black Lives Matter movement today.

“The ‘right to opacity’ rejects the argument that in order to be able to co-exist with others, I must first understand them. No doubt, there is something attractive about discourses of ‘mutual understanding’, but Glissant argues that what most matters is for each of us to be able to live with difference. He calls out the violence of making others transparent, that is, reducing people into pre-existing categories or forcing them to reveal and explain themselves in order to judge or compare.

“For Glissant, a key driver of racism is when a logic of identity and purity is privileged over difference, exchange, transformation, and relation. Arguably the same logic is at play when people hold to a monocultural idea of Irishness, judging one group to be ‘culturally’ the same - or properly Irish - and hence belong, and others to be ‘culturally’ different and not fully Irish. It undermines the very idea of a pluralistic polity.

“It doesn’t matter if this is a post-colonial legacy in the Irish case; this way of thinking about identity as fixed operates with the same mechanisms of exclusion.

“In terms of Black Lives Matter, I think Glissant would agree that we need to lay bare the ways in which claims to, and desires for, purity operate and how these play out in terms of white supremacy which presupposes whiteness as the norm. It means acknowledging just how much, quite frankly, black lives have not mattered in our recent histories. The creative move for him would involve creating new kinds of relations and solidarity.

“Finally, as many people have said, an example of where the ‘right to opacity’ matters involves white people not asking others to explain race and racism to them, or to demand that they tell their stories and experiences so they can understand them. Do some reading!”

To what extent was the Enlightenment a colonial or imperialist exercise?

“Glissant and others challenge the images of the Enlightenment and transparency – this project of human understanding has been experienced for many people as one whereby they were studied as objects and viewed as not fully human.

“I think what all these thinkers agree is that colonialism and imperialism can’t be swept to one side. Indeed, Sylvia Wynter argues that what she calls the ‘mono-liberal human’ has come into being because what was presented as salvation, the embrace of a common humanity, quickly became an exercise in imposing a threshold and ranking of who was to be counted as ‘human’. In this way vast swathes of people were positioned as infra-human needing ‘development’ and ‘civilisation’ to become fully human. She wants to imagine the human as creative praxis.

“In many respects, this brings us back to your first question and it might help to re-frame it. What happens when the story of Enlightenment philosophy and modernity ignores its historical relation to colonialism, to racial slavery, to genocide, to racism, to sexism and so on? What kinds of images and concepts came to be privileged, like autonomy, sovereignty, property, or identity, and how did they come into existence?

“In The Underside of Modernity, Enrique Dussel asks the reader to critically reflect on the inheritance of modernity and he says rather than Descartes’ famous ‘cogito ergo sum’ we should reflect on the ‘ego conquiro’ – I conquer, therefore I am.

“I think this needs to be taken seriously, and it means that we interrogate the canon more carefully rather than ignoring and dismissing those bits of texts that are problematic as simply prejudices of those times.”