Dance teachers protest outside Dáil over exclusion from reopening 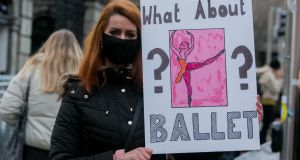 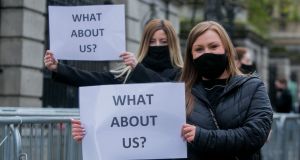 One-to-one dance instruction is permitted under the current Covid-19 Level 3 restrictions, Minister for Culture Catherine Martin has told the Dáil.

However, she stressed that all dance and exercise classes would remain suspended.

“While dance studios are closed at Level 3, they can provide facilities for use in individual dance practice or dance training,” the Minister said.

The Arts Council is in the process of preparing guidance on individual dance practice/training which will be available early next week, she added.

In the meantime, the Sport Ireland guidance for individual training may be used, she said.

The Government has previously stated that individual training is permitted but not exercise or dance classes.

Ms Martin responded in the Dail to Fine Gael TD Emer Higgins, who said children who dance should be treated the same as children who play sport.

Earlier, it was claimed that thousands of children are been discriminated against because of the Government decision to keep dance and stage schools shut.

Dance teachers and their pupils staged a protest outside Leinster House on Thursday after the Government announced on Monday that its reopening phase would not include them.

In its Plan for Living with Covid-19, the Government stated that only individual training should take place indoors and no exercise or dance classes are permitted.The ban extends to stage schools too.

Rachel Goode, who runs a ballet school in Dún Laoghaire and Greystones for 450 children, say she has only been able to teach on Zoom since the beginning of October.

Prior to that she had 12 children working while keeping social distance in an area the size of a badminton court.

She questioned why children are allowed to train for gymnastics but not for ballet.

“The department specified ballet as not being allowed. We are being discriminated against. We all stand two metres apart. We are trained to be socially distant. This is an injustice,” she stated.

She said it was predominantly women and girls who were affected by it. “Boys go to soccer and girls go to ballet. Everybody involved is outraged by this. We want to do the right thing. It just doesn’t make any sense,” she said.

Louise Darcy, the principal of the Darcy Dance Classical Ballet School, said she had a facility to allow students train four metres apart but the facility is closed.

“These dancers are dancing at a very high level. I feel very disheartened and let down. I feel our industry has been made a mockery of and the Government is making a mockery of what we do.”

Cara McCrystal (17), a member of the Irish National Youth Ballet, said dance was an important part of the wellbeing for young girls. She said the absence of an outlet such as dance for the last nine months has affected her a lot.

“Dancing is so physically demanding. It is good for mental health and physical wellbeing. Dancing is your family. A lot of people go to school, they eat and sleep dance. I would dance seven days a week.”

The group is calling on the Government to provide clarity on why their sector remains closed despite other sports and similar activities being allowed to reopen under the easing of restrictions this week.

The group says their businesses and their industry at large is at breaking point.

Professional dancer, Adam Fogarty, who is involved with the Whataboutus Movement says; “We have come together as a collective to get the government’s attention after nine months of struggling. Enough is enough, we deserve to be treated fairly and should be allowed continue to work in the safest way possible”.