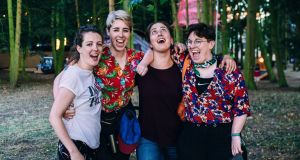 The country begins opening up again next week, but the immediate future of the arts and entertainment sectors remains shrouded in uncertainty. Museums, galleries and cinemas may be opening their doors, but many forms of live performance will remain shuttered into the New Year and beyond. Meanwhile, any relaxation of the rules comes far too late to save panto season, while most music venues will not be eligible to reopen.

So if, as we hope, the rollout of vaccines leads to a parallel rollback of restrictions from spring 2021 onwards, but the possibility remains of a third lockdown between now and then, how should venues plan for the next six months?

Speaking to an Oireachtas committee this week, the Arts Council’s chair Kevin Rafter and its director Maureen Kennelly made a strong case for opening theatres, galleries and arts centres, describing them as “well run and safe spaces, with an ability to professionally manage numbers”. But even if that argument is accepted, venues will have to factor in the possibility that a post-Christmas surge in Covid-19 cases will force them to shut yet again.

There is, of course, the possibility of reaching audiences via online channels. December will see an unprecedented number of virtual music festivals: the veteran Other Voices event kicks off on December 2nd in Dingle, with five days of musicians, including Damien Dempsey, Pillow Queens and Niamh Regan, performing from the Church of St James.

Also starting next week, Together in Electric Streams (terrible name, great idea) is a collaborative project promising “an exciting, genre-spanning programme of events featuring interactive live shows.” David Kitt, RSAG and Scullion are among those lined up. And, from December 14th to 20th, Hibernacle will be livestreaming performances from Lisa Hannigan, Saint Sister and others from Doolin, Co Clare.

Data published last week by DHR Communications and Amárach Research indicates that, in the last six months, a third of Irish adults participated in a cultural or heritage event of some sort

Other Voices will be free to view via YouTube, Twitter, Facebook and RTÉ.ie. Electric Streams gigs are ticketed, with prices at about €12. Hibernacle’s ticketing has yet to be confirmed but like the other two it is part-funded by the Government’s Live Performance Support Scheme.

That scheme has also granted a whopping 400,000 the Gleneagle INEC Arena in Killarney to employ performers, artists, technicians, creative and support staff for 12 performances by acts such as Junior Brother, The Academic, Gavin James and Mary Coughlan. These will be recorded for “either streaming or promotional purposes”, according to the Gleneagle’s statement. In addition to all this, there's the Station Sessions series of gigs being streamed from train stations around the country from December 8th - 10th, and Social Sessions (Dec 15th - 30th) from Dublin's Grand Social Club.

In most of the above we can see the practical effect of the helicopter money which the Government has allocated for culture and entertainment in recognition of the particular severity of restrictions on the sector. In others, performers and promoters are experimenting with new business models. It’s still unclear, though, how many people these experimental approaches are reaching.

Sadly, participants weren’t asked about online music performances, film streaming or indeed cinema-going (which previous research has indicated is the country’s most popular cultural activity). But the numbers do, unsurprisingly, reflect a decline in overall cultural activity among the population as a whole in 2020. They also suggest that online provision is very much a second-best to traditional live performance or to attendance at a real venue.

With that in mind, the Arts Council’s call this week for a swifter reopening of arts venues makes a lot of sense. “In moving from Level 5 restrictions, the value and importance of in-person engagement with the arts must be recognised,” Kevin Rafter told the committee. “And keeping doors open must be a priority.”

In fact, even if venues are required to operate at a fraction of their usual capacity, they are still likely to reach more people than their online equivalents. And, just as importantly, their opening allows production companies, performers, venue staff and everyone else involved to start preparing properly for the bigger return to normal that we hope and expect will occur later in 2021.

Covid-19 has profoundly changed parts of our world. Business travel has been killed by the Zoom call. The absurdity of the daily rush hour has been exposed by home working. Some of these changes may turn out to be permanent. But when it comes to art and culture, lockdown has revealed a contrary truth: live will always be better than livestream.