Oh Wonder cut their indie-pop teeth ghostwriting hits for others. Now the London duo are whipping up their own musical storms and there is no going back 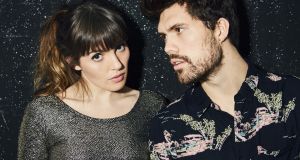 Josephine Vander Gucht is recalling Oh Wonder’s first live shows. These shows happened in 2015, a year after she and Anthony West had released a new track online every month and introduced Oh Wonder to the world.

“We didn’t know we had fans before those shows. We played in London, New York, LA and Paris, and I remember going onstage and hearing people sing back words that we’d written and put on the internet. Before, you’d only see ‘You have 5,000 plays for this track’. It was just digital data. But they were actually people. Tangible, living, breathing humans.”

It was a brand-new experience for the duo in many ways. While both had musical form – Vander Gucht as a solo performer, West as a member of indie band Futures – Oh Wonder far exceeded any previous projects. The songs written in their gardens hit a chord, and the combination of their voices, lush harmonies, ethereal pop atmospherics and great songwriting brought in the crowds.

“I think what people are connecting with is this conversation which we’re both having lyrically,” says West. “There aren’t any other duos who sing in unison, which is very accidental. We write quite celebratory and uplifting songs.”

“That wasn’t intentional,” adds Vander Gucht, “but we’ve inadvertently been guided by the music to write songs which are about finding the best in yourself and in each other and in life. That’s a nice message and it’s not one which is around a lot at the moment. I’m as curious and intrigued as anyone else to find out what people get from us.”

All of these people should be thrilled to bits with new album Ultralife. It’s a record with considerable intensity, brio and energy – “We knew from the live shows that you need more upbeat material,” notes Vander Gucht – but that also retains their fondness for smouldering atmospherics and their chops as songwriters.

“When we started writing together, it was easy because there was no pressure,” says West. “When you’re a songwriter, you have one day, if you’re lucky, to work with someone. But we’d all the time in the world and there was no compromise involved.”

Oh Wonder are still in demand as songwriters. “We still write for other people – a lot of them are ghosted – and it’s weird to hear them,” says West. “Our way of dealing with it is to detach ourselves and work to the brief and facilitate their needs and their emotions. It’s a totally different writing process; it’s less cathartic.

“Songwriters get briefs all the time which say ‘We want a song like Justin Bieber’, and you know that brief has been sent to thousands of songwriters and that’s why so much music sounds the same today.”

“I was in the changing rooms in Cos the other day trying on a top for a video shoot, and there was this song playing and I was going ‘What is this song? I know this song’,” says Vander Gucht. “Then I realised we’d written it, but I didn’t feel any connection to it. If it was one of our songs, it would be different. I get so excited when I hear one of our songs when I’m out and I sing along. It’s changing-rooms karaoke.”

When the pair collaborate with artists now, they have common ground as performers. “We’re able to say to them, ‘We know what it’s like to be an artist’,” says Vander Gucht. “We can talk to them about touring and promotion and all of that and go, ‘Let’s write a good song’.”

“Writing sessions with other songwriters are weird,” notes West. “I remember going into the process before Oh Wonder and the songwriter would be like, ‘I hope we write a good song because it will mean it makes the cut’.

“You can’t think about the journey the song will take, you can’t sit there like some songwriters and say ‘We should write it like this because that will appeal to this audience’ or ‘This song is very popular at the moment so let’s do that’. You can’t second-guess what will happen.”

When it came to Ultralife, the writing sessions in New York and London were hugely productive. Do they have a system in place at this stage?

“We always go back to moments we have experienced and create little worlds out of them,” says Vander Gucht. “All the songs will have been inspired and influenced by characters, worlds, scenarios and environments we’d have come across. They always stem from events.”

From now until the end of the year, Ultralife will take the band around the world. It’s a far cry from spending time in a room writing songs.

“There are days when it’s a business,” says Vander Gucht. “You’re so tired and you’re trying to find clothes for a video shoot and the stylist is on your case and you’ve got 180 unread emails in your inbox and you’ve got people looking for you to write something for a mail-out and you’ve to speak to the accountant and you’re hiring and firing people and it’s all non-musical things. On those days you feel you’d be much more creative if you sat at home and wrote songs for someone else.

“But all of that whittles away when you walk on stage and you’ve 2,000 people looking back at you and you have the time of your life. It’s a high you can’t get with anything or anyone else. If we can both carry on playing music in this capacity, whether that involves touring Australia or writing songs together, that will do for me. As long as we can sing our own songs, that will do us. It’s a privilege.”