Victoria Mary Clarke: ‘Johnny Depp has been a bit of a hero for me and Shane’

Soundtrack of My Life: Shane MacGowan’s partner on the songs getting her through Covid-19 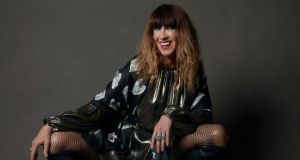 Victoria Mary Clarke: ‘The playlist is very random, but that’s what I like about it.’

During the pandemic I’ve been listening to music for positivity and to relax. The songs I’ve picked for my playlist are vibrant. What’s kept me going is the feeling that no matter how restricted we feel, we have the capacity to express.

I happen to know many of the singers I’ve picked, but they’re also passionate, and when I listen to them it makes me feel alive, even if I do have to stay in my house.

It’s like with Johnny Depp’s version of Heroes, with Hollywood Vampires. I love David Bowie’s version – everyone does – but Johnny’s version almost tops the original: he’s a good guitarist, and you can feel his intensity.

I like the message too: we can all be heroes, especially in these times. You can choose how you’re going to react. I’m not preaching, but you do have a choice. You can moan about not being able to travel or you can think about what you can do instead.

I never, ever tire of Shane’s voice, and it was difficult to pick one Pogues song, but I chose Summer in Siam

I also picked it because for me and Shane – Shane MacGowan, my partner – Johnny has been a bit of a hero. He’s come through for us in so many ways, at so many very difficult times. Like when Shane got sacked from The Pogues, nobody would touch him with a bargepole.

Everyone thought he was washed up. But Johnny said he wanted him to come and open his nightclub in Los Angeles. He flew us over and Shane opened the club, and that just started a whole new lease of life for Shane.

Since then Johnny has gone on to do so many other things, like making videos and appearing on Top of the Pops with Shane, and then making the film Crock of Gold. We were so lucky, because there was a little gap between lockdowns where you were allowed to go places, so we went to Zurich to promote the film, and I got to walk the red carpet with Johnny. I got to wear a Bella Freud evening dress, got the makeup done, the whole thing. It was a fairy-tale moment.

Shane says that music is the quickest and best way to change how you’re feeling. I agree: it really does impact you, and some kinds of music impact you in different ways. When I’m feeling frustrated I listen to Kurt Cobain a lot. He was good at expressing anger and frustration.

I feel like a lot of it is to do with moving energy. I was hospitalised with depression, which has given me an advantage during the pandemic of having to learn tools and tricks to deal with moods. I learned that if you just move around a bit, you can shake off some of those feelings, so I find running around parks is really helpful. The angel meditation is probably the most useful thing. I just ask them, “Angels, can you help me?”

And they do. And they sometimes speak to me, telling me to try something. It’s like being life coached by an invisible thing.

I never, ever tire of Shane’s voice, and it was difficult to pick one Pogues song, but I chose Summer in Siam. The song evokes beautiful memories of being in Thailand with Shane. Everything about it is beautiful: the people, the food, the beaches. It’s one of my probably my favourite places in the world, and it’s where I’d like to be right now.

I also picked Haunted. I love the song but I especially love the contrast between him and Sinéad O’Connor. She’s so delicate and pure, and he’s so rough, it’s like yin and yang. Similarly, I picked Ballade de Melody Nelson with Johnny Depp and Vanessa Paradis singing.

It’s from an album from Lulu Gainsbourg in which he and others cover his father’s songs. Shane’s on the album, too, but I loved the combination of Vanessa’s sweetness and Johnny, who’s more macho in it. It reminds me of very happy times, hanging out with them when they were happy, long before everything went wrong. I wish they recorded more together.

Overall, the artists I’ve picked for the playlist are the artists that I listen to the most. I might listen to Van Morrison, even the same album, all day on repeat. The playlist is very random, but that’s what I like about it. There’s a bit of modern jazz, The Rolling Stones, some obvious stuff with more unexpected stuff. It changes mood quite rapidly, which as I was saying, means you don’t get stuck in a groove. – As told to Shilpa Ganatra

Victoria Clarke’s shop is at victoriamaryclarkeangels.com