Two classical music concerts to see in Dublin this week 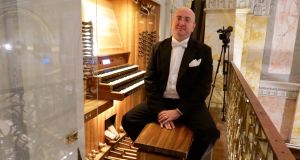 There’s a widespread belief that classical musicians don’t improvise. That’s simply not true when it comes to the organ. Irish organist Peter Sweeney, who died earlier this year, was a prizewinner in improvisation at the Conservatoire de Musique in Geneva. Eugenio Fagiani, organist of the Franciscan shrine of La Verna, Arezzo, ends his recital at St Michael’s Dún Laoghaire, with an improvisation on a submitted theme. Earlier in the evening, he will play a work of his own (Victimae Paschali Laudes), as well as his own arrangement of the Adagio from Mozart’s Wind Serenade in B flat, K361. The programme also includes a selection of pieces by the little-known Italian composer Giovanni Morandi (1777-1856) and opens with the great Prelude and Fugue in E flat from the third part of Bach’s Clavierübung.

It was Eugene Goossens who, as conductor of the Cincinnati Symphony Orchestra in the war years of the 1940s, commissioned a famous series of fanfares. Only one of them, Aaron Copland’s Fanfare for the Common Man, remains at all well known – among the others were ones celebrating paratroopers (Paul Creston), France (Virgil Thomson) and Freedom (Morton Gould). In the 1980s, the Houston Symphony Orchestra commissioned an even larger number of fanfares, and Joan Towers cheekily called hers Fanfare for the Uncommon Woman, and later wrote more to create a set of three. The first opens the RTÉ NSO’s lunchtime programme into which conductor Gavin Maloney place two other pieces by women, Anne Dudley’s Poldark Suite and Lili Boulanger’s D’un Matin de Printemps. The programme also includes Copland’s Quiet City, and two works with Irish Freemasons Young Musician of the Year 2017, violinist Richard Thomas – Tchaikovsky’s Meditation and Saint-Saëns’s Havanaise.

Ennio Morricone, genius: ‘I didn’t know I was doing anything new or revolutionary’
3

Married life on the road: a tale of two vagabonds
8