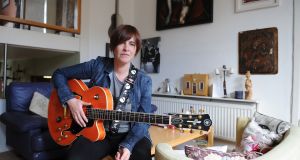 Eleanor McEvoy: “A Woman’s Heart”, on which she was a co-writer, helped launch her career. “If it happened now, I would be earning nothing from it.” Photograph : Aidan Crawley

The Government needs a national music strategy to protect composers and musicians if the country is to maintain a commercially viable and successful music industry, singer-songwriter Eleanor McEvoy has said.

Ms McEvoy, who is chair of the Irish Music Rights Organisation (Imro), the representative group, has called for a more co-ordinated effort from Government and “cost neutral” measures between departments to support an industry gutted by the loss of income from free online music streaming.

She made her call as the European Parliament voted on Thursday to reject sweeping changes to EU copyright law that would have made internet giants such as Google and Facebook pay musicians and other creative artists for content and what they distribute online.

The Bill would have closed a loophole forcing digital platforms to filter content for copyright infringements and halt “transfer of value” from creators to internet providers.

Critics had argued that the Bill, which was designed to update copyright rules for the digital age, would have significantly damaged internet freedom.

The Copyright in the Digital Single Market Directive will be sent back to the parliament for further discussion. The Bill was, unusually, rejected after already being approved by a parliamentary committee.

Ms McEvoy, representing Imro and the 12,000 Irish musicians and composers who are members, expressed her disappointment that the vote did not pass despite the support of many Irish MEPs.

“There has been a sustained campaign of misinformation in relation to the application of these proposals and unfortunately that scaremongering by giant technology companies has been successful,” she said.

The Dublin-based singer-songwriter says that without supports and protections from Government, the industry will not have the composers and musicians to create the next generation’s Riverdance and other commercially successful material and the industry’s future will not be protected.

Other measures Imro wants Government to look at, in addition to copyright reform, are changed to the treatment of VAT and other taxes for the industry and better access to credit for musicians with variable incomes.

She says it is “frustrating” that the tech industry, including internet companies such as Google, Facebook and Apple, have such strong influence over government in terms of lobbying over policy when the music industry employs more people and does not have the same kind of influence or access.

“Musicians live all around the country – they are settled – and yet they are not treated as being an industry in the same way,” she said in an interview.

“You can see how much our industry brings in to the country in terms of tourism, jobs, ancillary jobs and yet it is not recognised as such.”

Ms McEvoy said musicians’ incomes have been “decimated in a very short space of time” with the rise of online music streaming and that legislation needed to keep pace with changes in technology.

“Nobody could have foreseen the extent to which it was going to change our lives,” she said.

“Now it has, we need to look at it and ask, ‘does the advent of technology mean that every law or copyright goes out the window?’ No it doesn’t.”

A Woman’s Heart, the 1992 compilation album and the country’s best-ever selling Irish album on which Ms McEvoy was a co-writer, helped launch her career.

“If it happened now, I would be earning nothing from it,” she said.

Ms McEvoy said another of her songs, Sophie, has become an online hit, being played more than 764,000 times on online music streaming app Spotify – roughly the same number of albums A Woman’s Heart sold.

“Sophie is the one that is best-known among a younger age. It was all shared online, on social media. I got nothing from it, crumbs for it, compared with what I got for A Woman’s Heart,” she said.

“Without the song, you don’t have an industry,” says Ms McEvoy, and closing loopholes means YouTube, Facebook and Google will have to pay “a fair amount to people who bring people to their platforms”.

“You have got to look after the creators and if you don’t, you are putting everything behind that in danger,” she said.

Bella Heathcote: ‘It was fun getting to be the Neighbours school b*tch’
2