Richard Swift, who worked with the Black Keys, The Shins and the Pretenders, had ‘serious medical condition’ 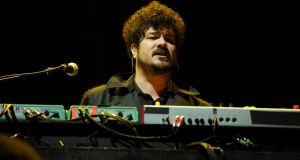 Musician Richard Swift performing with the The Shins in 2012. Photograph: Kevin Winter/Getty Images for Coachella

Richard Swift, a cult US singer-songwriter and producer, has died aged 41. He had been diagnosed with a “serious medical condition” according to a fundraising page set up following a recent stay in hospital.

From 2005 onwards, Swift released a series of albums and EPs that blended classic guitar-driven songwriting with offbeat production touches and his own soulful vocals. They won acclaim, and he toured as a support act with the likes of Wilco and the Fray; his song Would You? was recently featured in the Lady Gaga documentary Five Foot Two.

Swift performed on the Pretenders’ 2016 album Alone. Frontwoman Chrissie Hynde promoted his fundraising campaign, saying: “I love Swift, he is a dear friend.”

He was also a member of indie rock band the Shins from 2011 to 2016, and was the touring bassist with the Black Keys in 2014. The latter band posted on Instagram: “He was the funniest person we ever met, one of the most talented musicians we have ever worked with and we feel so honoured to have known him. RIP Richard.”

Dan Auerbach of the Black Keys posted a tribute on Instagram saying: “I will miss you my friend”. The 39-year-old Black Keys singer shared a picture of him with Swift and said: “Today the world lost one of the most talented musicians I know. He’s now with his Mom and Sister.”

Swift also worked as a producer or mixer for Sharon Van Etten, Foxygen, Nathaniel Rateliff & the Night Sweats and Damien Jurado, with whom he made a collaborative album covering songs by acts such as Kraftwerk and Chubby Checker. Swift was also an illustrator, and designed album sleeves for Foxygen and others.

Many other musicians paid tribute to the US musician including Nathan Followill of the Kings of Leon, who described him as his wife, Jessie Baylin’s, “musical soul mate”.

Jonathan Rado from Foxygen wrote on Twitter:: “Today i lost one of my best friends. family. my hero. my everything. one of the true greats. swift was my music dad. He taught me everything i know & i will never forget him.”