Plus songs you have to hear from Teyana Taylor and Lizzo 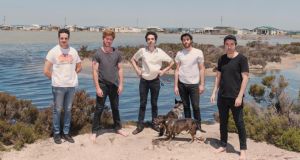 Rolling Blackouts Coastal Fever: a future vision of rock’s past

What A very 1980s-inspired guitar band.
Where Australia.
Why Nostalgia is a powerful beast. In the case of Rolling Blackouts Coastal Fever – or Rolling Blackouts CF for, um, short – listening to the Melbourne band is akin to reliving a dimly lit past of rock music, when REM were still a jangly Georgia band on the up, when The Go-Betweens were not even the cult Aussie band they are now, and college rock had cachet.

Quite why Rolling Blackouts CF conjure such specific comparisons is down to their being less a facsimile than a band wearing the skin of the past so effortlessly. Their propulsive garage rock sounds pleasingly familiar to older listeners yet is confident enough for younger fans to embrace too.

Their new album, Hope Downs, has Aussie dry wit, barrelling rhythms and songs that sound as if they were rediscovered and relearnt from a cassette tape found down the seat of a midnight-blue coupé owned by a girl called Jenny (as their song Talking Straight suggests).

Rolling Blackouts Coastal Fever play Whelan’s in Dublin on August 21st – which leaves just enough time for the fresh listener to indulge in this future vision of rock’s past. rollingblackoutsband.com

Teyana Taylor: Rose in Harlem
The dusty whirlwind that was Kanye’s Wyoming albums, which saw the controversial rapper produce and feature on five separate records, alongside Kid Cudi, Nas and Pusha T, has now settled. The last of the five, from the R&B singer Teyana Taylor, suffered the most from the rushed approach, with a chaotic release. Which is a pity, because the album K.T.S.E is a fine collection of modern R&B with plenty of Kanye’s old-sampling soul in it, exemplified by the exquisite Rose in Harlem. Watch the video here

Lizzo: Boys
The Minneapolis-based rapper and singer Lizzo has paid homage to Prince, her one-time collaborator, with Boys, a retro funk pop track that crams a lot of bright fun into its three minutes. Lizzo celebrates all the boys: gay ones, bearded ones, Mississippi ones, playboys. Lizzo celebrates them all with an infectiousness that makes it immune to criticism. A lustful pop song in thrall to pop’s original sexually liberated. Watch the video here