Tradfest 2018: Everything you need to know - it promises an eclectic mix, with performances from Martha Wainwright, Shirley Collins, Tríona Ní Dhomhnaill and many more 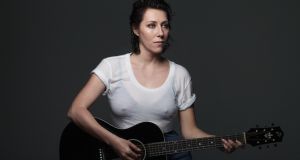 Taking as its starting point an all-embracing notion of traditional music, Temple Bar Tradfest has captured the zeitgeist this year, whether by accident or design, with a programme dominated by an eclectic mix of female artists. Alongside some of those women who form the backbone of our own tradition: Maighread and Tríona Ní Dhomhnaill, Laoise Kelly and Mairéad Ní Mhaonaigh, are women who work in duo settings (Caitlín Nic Gabhann with Ciarán Ó Maonaigh, Máire Ní Chathasaidh and Chris Newman).

Widening their embrace to artists from across the water, Tradfest is luring English folk legends, Shirley Collins and Judy Collins to perform in St Michan’s Church and St Patrick’s Cathedral respectively. Both women epitomise that resilient, independent spirit that inhabits songs and stories of love, lust, loss and survival with equal parts grace and danger.

Casting the net wider still, Tradfest is hosting Wallis Bird, Maria Doyle Kennedy and Martha Wainwright, all singer/songwriters who’ve steadfastly cleaved to their own independent paths, with scant regard for the passing whims and traitorous affections of the music trade.

And with a gaze trained further still, there’s the delicious prospect of hearing Shelby Lynne and Alison Moorer live (a treat for fans who take their alt country with a tincture of Dusty Springfield betimes). These multiple Grammy and Oscar-award winning sisters share a bill with the American acoustic roots and blues duo of Martin Harley and Daniel Kimbro, along with Irish bluegrass combo I Draw Slow.

The presence of Breton harpist and singer Alan Stivell will be welcomed by many who were drawn to his innovative melding of traditional and ambient sounds, not to mention his bold championing of “Celtic” music, long before it was either popular or profitable.

Lest anyone suspect that Tradfest is overly reliant on established names with comfortable and familiar repertoires, there’s a healthy mix of cutting edge artists in the offerings too. The buoyancy of the four piece This Is How We Fly is a celebration of the ways in which percussive dance (courtesy of Nic Gareiss) interacts with jazz-tinged musings of Seán MacErlaine, as well as with the spacious fiddle lines of Caoimhín Ó Raghallaigh and the spiky rhythms of Swedish percussionist, Petter Berndalen. And then there’s the sublime piping of David Power who saddles up alongside harpist Tríona Marshall for what promises to be a divinely curated set, such is the pair’s individual and collective reputation for attentive musicianship.

There’s a particularly enticing gathering of three female solo musicians at teatime on Sunday evening, with Ciara Sidine, Karrie and Ailbhe Reddy programmed under the collective moniker of The New Folk in St Werburgh’s Church. These are women who’ve been steadily forging their own musical identities, openly acknowledging and embracing the influence of Gillian Welch, Maria McKee, Joni Mitchell and Tom Waits. This just might be one of the standout concerts of Tradfest.

Tradfest has become an annual gathering that rises many out of the doldrums of late January, shedding skeins of light where they’re badly needed. The scale of the event demands the use of large venues within the ambit of Temple Bar, though their reliance on so many church settings is a deterrent for some punters who find the formality and discomfort of a church pew at odds with the warmth and charisma of the music.

At its heart, this music is rooted in dance, so who better to reconnect us with this essence than Séamus Begley, and English guitarist and composer, Tim Edey. Music to stir hearts, souls and pelvises in need of some down home swivelling – and to herald in the spring.

See tradfest.ie for full details of the line-up. Here is a selected guide to events