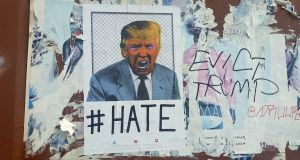 Trump Resistance: Following the US president’s election a year ago, “one thing people seemed to cling to in the darkness and despair – [was] the sky is falling, but at least the tunes will be banging”. Photograph: Getty

It was the middle of 2017 – 12 toxic, corrosive months that consistently found new ways to chill the soul – and I was reviewing a four-minute song. After submitting the straightforward piece, one of the editors at the music website I was contributing to asked me to delete a mention of the newly anointed president of the United States. Too many writers were putting Donald Trump into their reviews, he argued. Best not to mention his name unless absolutely necessary.

In this instance, I made a case for reference being relevant and it stayed in. But I agree with that editor’s core point – shoehorning Trump into every piece lessens the impact of writing about him when wholly necessary. The same sentiment was repeated by another of my editors recently, who asked that writers refrain from mentioning America’s current political climate if at all possible, lest grousing about Trump becomes a music writing cliché.

As a critic, it’s tempting to contextualise everything coming out of the US through the lens of the current presidency. His presence in the Oval Office seems so radically destructive, so unbearably chaotic, it’s difficult to imagine a musician living in the mire conjuring up an album-length set of personalised songs that don’t somehow draw upon what’s happening in the country. The music industry, after all, is often accused of being a stronghold of liberal thinking. Just think back to Trump’s inauguration booking woes, when attempts to stitch together an A-list roster of talent were met with rejection after rejection from the pop world’s hottest names.

This is not to say the sins of past presidencies should be overlooked. Just about every person who has held the office has engaged in policy or rhetoric deserving of a response from pundits, critics, artists and, for sure, musicians. But that Trump’s presidency feels particularly dangerous and bewildering is undeniable.

Here’s a man who jumps on Twitter and, with the spelling and grammar of a child, threatens to use the nuclear weapons at his disposal to vaporise a whole nation. In this atmosphere, it’s tempting to read every oblique but aggressive lyric as a takedown and every moment of musical dissidence as a protest against Trump.

There’s long been a certain expectation on artists to lead from the front when it comes to political and social issues. Louis Armstrong was criticised for being reluctant to get in involved in national discourse (“I don’t get involved in politics. I just blow my horn,” he once said) before breaking his silence on civil rights in 1957.

When Trump snatched the most unlikely of victories in November 2016, there was instantly the expectation that a great wave of protest music would follow. It was one thing people seemed to cling to in the darkness and despair – the sky is falling, but at least the tunes will be banging. It’s a hell of a thing to put on a generation of musicians and songwriters, but many have answered the call.

From the moment Trump’s victory was confirmed, “The Resistance” was born – that first line of defence against the new president’s agenda. A Tribe Called Quest’s album We Got It from Here . . . Thank You 4 Your Service provided a riposte to America’s racist forces. Fiona Apple’s short chant Tiny Hands voiced disgust at hearing Trump brag about sexually assaulting women in that infamous Access Hollywood clip (“We don’t want your tiny hands/ Anywhere near our underpants,” chants Apple). Joan Baez released a video of her performing Nasty Man, her takedown of the “future dictator” that held nothing back. There have been many other righteous examples.

Even those not involved in overt political commentary can find their work contextualised as such. When Cardi B, the Bronx rapper of Caribbean heritage, dislodged Taylor Swift from the top of the US singles charts last September, it was cited as a spiritual skirmish in a broader societal conflict – the child of immigrants beating the star unwillingly endorsed by America’s white supremacists. As Dodai Stewart, editor of news website Splinter, writes: “The result is a battle for number one that feels more like a battle for America’s soul, with fans hopeful that Cardi B can reach number one, thereby taking with her and uplifting everyone who’s ever felt oppressed, outnumbered, underrepresented, disadvantaged, or underprivileged.”

Music will tackle political turbulence until the day the last guitar is reduced to a pile of ash. As long as there’s a feeling that the US is bleeding internally, the music streaming out will chronicle life within its borders. Some songwriters are stepping up – the weight of The Resistance is on their shoulders. No time for love songs right now.

G Perico – Amerikkka
It’s coming up on three decades since Ice Cube popularised the alternative spelling of his home nation in protest at institutionalised racism. Last year, rising LA rapper G Perico staked a claim to being Ice Cube’s spiritual successor. “Make America great again,” he raps on Amerikkka, echoing Trump’s famous slogan. “Do you know what that means?” The track starkly answers that question from the perspective of a young black man.

Downtown Boys – A Wall
Downtown Boys’ A Wall is a response to Trump’s election promise to build a giant barrier on the US-Mexico border. In four minutes of barbed, dissonant punk energy, frontwoman Victoria Ruiz denounces the sinister plot, while firing a resonant warning shot at the White House: “You can’t ball the f**k on us”.

Margo Price – All American Made
Nashville star Margo Price’s poised, quiet acoustic number captures the America’s capitalist crush and the people at the bottom who suffer from the rigged system. “I wonder if the president gets much sleep at night?” she asks. But the song also intercuts clips from Trump’s successors and references the Iran-Contra scandal that hit the Reagan administration, reminding us that political leaders behaving badly is nothing new.

MH the Verb – Yo America
From his album Afronaut, a record billed as “the starting component of a conceptual, multimedia project that tells the story of a black sci-fi heroine from the future sent back in time to uplift and empower our world”, rapper MH the Verb asks a simple question: “America, why you hate me?” Over the grubby, funky electronic beat, MH voices his pain at the fate of Freddie Gray and Eric Garner – whose deaths at the hands of police sparked the Black Lives Matter movement – and, with determination, asserts his own spirit to be unbreakable by wicked forces.