Police not treating death of Cranberries singer as suspicious 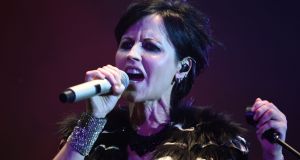 Dolores O’Riordan died on January 15th, 2018 in London at the age of 46. Photograph: AFP/Getty Images

A postmortem on Cranberries lead singer Dolores O’Riordan will take place on Thursday, a coroner’s office in the UK has confirmed.

O’Riordan died suddenly at the Hilton hotel on London’s Park Lane on Monday. She was 46.

Preliminary results into the cause of her death are expected on Thursday afternoon or Friday.

The body of O’Riordan will then be flown home for her funeral in her native Limerick, which is likely to take place early next week.

Police in London have confirmed they are not treating her death as suspicious.

In a statement on Wednesday, the Westminster coroner’s office in London said: “The postmortem, at the moment, is scheduled for tomorrow.”

Her remains are at the coroner’s office in Westminster and as part of the postmortem, toxicology tests will be conducted.

She was in London for a recording session on a new album. She had recently been working with a new band, D.A.R.K.

Her boyfriend and D.A.R.K. bandmate said “the love of my life is gone” following her death.

In a statement on the band’s official website, Ole Koretsky said: “My friend, partner, and the love of my life is gone. My heart is broken and it is beyond repair.

“I will continue to stumble around this planet for some time knowing well there’s no real place for me here now.”

O’Riordan was born in Ballybricken, Co Limerick, in 1971, the youngest of seven children. She joined The Cranberries in 1990.

They were one of the biggest Irish bands of the 1990s, selling more than 40 million records over their career. Their most popular hits included Zombie and Linger. They split up in 2003 and reformed in 2009.