The Stones at Croker: Mick gets us all to yowl, so of course we do

For more than two hours, they pummel our senses with some of the best rock music ever 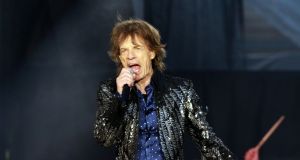 At 8.30 in Croke Park a man starts playing the bongos and suddenly his Satanic Majesty himself, Mick Jagger, is there in a long silver coat, twirling and whooping his way through Sympathy for the Devil, as though someone called for an aggressively fey space wizard. In fairness, we did.

Lock up your air-guitaring fathers folks, The Rolling Stones are in town and they’ve brought The Rock and, also, merch.

Yes, their rebel voice may have transmuted into a lucrative rock brand but what of it? Straightforward authenticity was never really the point.

In the early days the Stones were transgressively cosplaying as American blues men and now they’re channelling their younger selves like ripened Peter Pans.

For over two hours tonight Mick Jagger prowls around, flailing his arms, waggling his bum, thrusting his pelvis, hand-clapping, conducting the audience, gliding, sliding, preening, skipping, preacher-manning and generally Jaggering (it’s a verb) and demonstrating everything he learned at the London School of Economics (art school posers be damned). It’s amazing.

He has some help. There’s Charlie Watts giving off the stoical stone face of a man aware of working time legislation, propelling things along with his idiosyncratically restrained backbeats.

And then there are the elemental guitar slingers Ronnie Wood and Keith Richards. Often job-sharing on the same guitar lines, they are inclined to amble around the stage as though golfing or taking a brisk tour through wine country, occasionally stopping to comment to each other about the sights.

Ronnie Wood is wearing trousers with a stripe down the leg, possibly to help him ascertain what direction he’s facing, and his hair is a thatch of crow’s wings.

Keith Richards wears a glittery bomber jacket. A cloud of white hair explodes out of a headband and his wrinkle-bracketed mouth regularly segues from a gleaming grin into an impudent pout.

These vital guitar lines – from Paint it Black to Honky Tonk Woman – have embedded themselves in pop consciousness and yet Keith, in particular, has the look of someone making it up as he goes along. He sometimes seems surprised at what he’s wringing from the guitar. Which is fair enough, the riff from Satisfaction is still, a half-century later, blissfully surprising.

Even now he continues to be a brilliantly, bad influence. I mean, when I look at him, grinning and grooving like Satan’s da, I think “Maybe I should do more drugs. What’s the harm?”

Generally they seem to be having a great time, chatting and laughing and sharing moments with each other. Bolstered by meticulous brass players, keyboardists and backing vocalists, some songs turn into extended jams.

Mick plays harmonica. Keith sings a few (the sweetest being the country-tinged The Worst). Ronnie rips up the stage with his riffage on Midnight Rambler, and there’s a call and response sequence in which Mick gets us all to yowl, which, of course, we do.

Early highlights include a stadium wide singalong to Wild Horses, played after an online poll (it apparently also offered, Far Away Eyes, Angie and Moonlight Mile) and Mick grabbing an acoustic guitar for a French horn-augmented and singalong-inducing You Can’t Always Get What You Want.

But there are a lot of highlights – Mick circling powerful backing vocalist Sasha Allen during an incendiary Gimme Shelter. Mick donning a blue space jacket like Jean Luc Picard might wear for a crisply funktastic Miss You.

Shortly afterwards bassist Darryl Jones slap basses the funk out of us and Ronnie Wood goes for a bit of a run. Sure why not, you legend.

Later he reveals that he has grappled with our cuisine. “The four of us went out in Temple Bar and ended up sharing a spice bag!” They have eaten of the spice bag, we think. Now they can never leave.

And all in all, as they pummel my senses during Brown Sugar and Jumpin’ Jack Flash and Start Me Up and a winningly endless, fireworks-enhanced (I can’t get no) Satisfaction, I am astounded.

Even if their slinky, ramshackle, rhythm and blues is increasingly treated as an aide memoire for period dramatists, this is still some of the best rock music ever.

There’s a fine line between cartoon and myth. The Stones’ genius is that they manage to be both. Someone buy them another spice bag.