Ed Sheeran in Phoenix Park, Dublin: Everything you need to know

Even if you’re not going to the concerts, you might want to note the traffic restrictions 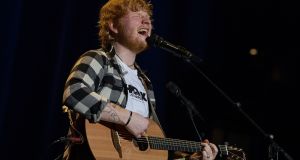 Ed Sheeran is back in town for a grand total of nine gigs across the country. Above: The opening night of his Australian tour at Optus Stadium in Perth. Photograph: Matt Jelonek/WireImage

This is it. We’re in the final stretch of Ed Sheeran mania in Ireland as his mini Irish tour comes to a close in Phoenix Park, after two weeks of gigs in Cork, Belfast and Galway.

Even though it’s the end, these gigs will hold parts of Dublin hostage with traffic restrictions in the surrounding areas of Phoenix Park and hordes of fans making their way to Dublin on Friday and Saturday.

The singer-songwriter has already played Páirc Uí Chaoimh in Cork and Boucher Playing Fields in Belfast at the start of May, and Pearse Stadium in Galway last weekend, and kicked off in the Phoenix Park with his Wednesday-night concert.

If you are going to one or more of the gigs (or dropping someone there) then the official Ed Tour 2018 app might come in handy. It will be updated for all concerts and you can download it from the Google Play Store or Apple App Store.  The Sheeranmania is on its last legs, and even if you’re not going to any of the concerts, it’s important to take note of the traffic restrictions.

This is the end of the Irish Ed Sheeran takeover. For those attending the gigs, may he sing the songs you want to hear and for those who are not going to the gigs, may your journey home through Dublin be unaffected. Godspeed.

Tickets are still available on Ticketmaster for the Dublin gigs. Aiken Promotions is warning all gig-goers not to buy tickets from secondary sites or bogus sellers. Resold tickets will not be accepted, and those ticket holders will be refused entry.

Doors open at 5pm, and no early queuing will be permitted. The gig is scheduled to end at 11pm and the stage times are as follows:

An Garda Síochána recommends that gig-goers use public transport. There will be signs in the area directing you to the correct entrance, so follow the coloured route or directions indicated on your ticket. Traffic will increase in the area, so allow extra time for your jouney. An Garda Síochána will be managing traffic in the areas around each venue; garda.ie has more information.

By car: There are no parking facilities available in or beside Phoenix Park for this concert, and a tow-away system will operate. The drop-off and pick-up point is Auburn Avenue on the left hand side heading towards Castleknock Road and Conyingham Road. These areas will be policed at all times.

By Dublin Bus: Dublin Bus will be running services outbound on the N3 past the Halfway House roundabout and Victoria Quay. Their inbound services will be on the Navan Road, North Circular Road/Hanlons Corner and Inns Quay.

The Sheeran Shuttle: Shuttle buses will depart from Custom House Quay, Dublin 2 on Wednesday 16th May, Friday 18th May  and Saturday 19th May between 3pm and 7pm. If you have already booked online, you are guaranteed to depart at the time booked. Tickets can also be bought at the bus stop on Custom House Quay each day, and return buses from Phoenix Park will depart from 10:30pm until midnight. Buses  will leave on first-come, first-served basis, but be prepared to queue as demand will be high. For more information, visit bushireireland.net.

By taxi: Taxis can drop people off at a designated area on the Castleknock Road, unless they are dropping off disabled passengers with a pass. These taxis can access The Phoenix Park through the Cabra Gate.

Minibuses:  Minibuses can enter the park through City Gate and can drop gig-goers off at the Polo Grounds via Lords Walk. Minibuses will not be allowed drop people off after 6pm, when the road closure on Chesterfield Avenue kicks in. The minibus pick-up point will be at the Dublin Zoo car park  beside Lords Walk.

The following road closures will apply on May 16th, 18th and 19th – unless otherwise stated

There have been reports on social media and elsewhere of over-crowding and delays at Ed Sheeran’s first Dublin concert on Wednesday night.

Aiken Promotions says it has reviewed the situation and “put additional measures” in place. The promoter says much of the delay was caused by concertgoers arriving late.

The promoter’s explanation? “Movement of people through the large gap between two banks of seats worked well all night until Ed took to the stage when approximately 5,000 people were still to come in. When Ed went on stage those people who were in the concessions /toilet area and those still entering came in through the gap but did not move on to take a place in the designated standing area, they just stopped inside the gap to watch the show. This gap was not meant to be a viewing area, it was designed to facilitate movement between areas.

“This meant the people behind those who had stopped were unable to get into the viewing area, and likewise some people were unable to get back out to the toilets for a time. There was at all times plenty of space left and right but it took time to move them on in. Once this had been done normal movement between the areas resumed.”

The solution? Concert-goers should allow themselves a good amount of time to get to the venue as the walk into Phoenix Park could take up to 40 minutes. Exiting the venue also takes around this amount of time.

Eat before you go and bring snacks for young children. Queues for food stalls and the bar were reportedly very long at times.

Check your tickets. Some fans were under the impression they had seating tickets when they actually had standing tickets. “Gen admission (GA)” are for the designated standing area. A seated ticket will clearly state on it a block/row and seat number. The Red Route is for seated tickets. Seating blocks A and B must enter by the North Rd entrance (Cabra and Ashtown side). Seating Blocks C, D and E must enter at Chesterfield Avenue. Those with standing tickets – Yellow Route or Blue Route – can enter by either side and should follow signage and stewards’ directions.

Gig goers are advised to not bring a bag unless it absolutely necessary. Anyone without a bag will be fast-tracked through security. If you are bringing a bag it must be smaller than an A4 piece of paper. These bags will be searched, which will slow down the queuing process. So don’t bring a bag, basically.

Do I need to bring ID?

Yes. To gain entry you need your tickets and booking confirmation, the credit card the tickets were bought with, and a valid form of ID. Anyone without ID will be turned away.

Under-18s must be accompanied by an adult at all times. Free Tag-a-Kid safety wristbands, to help reunite lost children with their parents or guardians should they get separated from each other, will be available at all customer-care points both inside and outside the venues.

What is he likely to play?

This is the set list for Sheeran’s gig in Belfast on Wednesday, May 9th. Don't expect too much deviation.

The New Mutants: ‘I kept reading all these articles and none of it was true’
Real news has value SUBSCRIBE