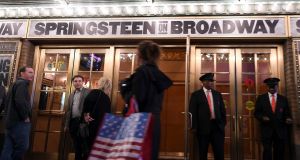 Official show time for Springsteen on Broadway is 8pm, but for those with the determination and bladder control things begin well before lunch when the first people gather to await his arrival at Walter Kerr Theatre’s stage door.

By the time Bruce Springsteen arrives through the New York traffic at 6pm, a mix of fans, professional autograph hunters, passers-by and security spill across a chunk of West 48th St. And when he disappears inside after signing all he can in a couple of minutes, the excited or awestruck crowd includes many ticket holders. Some of them have travelled from as far away as Australia and revelled in these few seconds with – or mere glimpse at – the Boss. The irony is that in a short while they’ll see a show in which Springsteen spends over two hours revealing himself to a degree no-one had a right to expect.

He will next month receive a Special Tony Award for the 236-show residency at the 975-seater theatre. Not officially entered for the awards, the show is difficult to categorise anyway. It is not a standard musical, neither is it a one-man play. It is not a concert, and certainly not a feel-good clapalong. It is a singular experience – a singular Springsteen experience even for the most hardcore obsessives.

The tickets are expensive. Prohibitively expensive, many complain. But you can’t say he doesn’t try and give your money’s worth

He could have sprinkled well-worn anecdotes and practised zingers through the greatest hits and sold as many tickets just as quickly. But no. Using his recent Born to Run autobiography as a foundation, this is a genuine superstar talking with humour but often raw honesty and gut-punch emotion about his life while shedding new light on songs you thought you knew every hook and inflection of.

The tickets are expensive. Prohibitively expensive, many complain. But you can’t say he doesn’t try and give your money’s worth.

From the off, it’s clear almost everything about the show is stark. He wears black T-shirt and jeans, and the lighting throws his shadow long across the floor. Apart from some equipment cases in the rear shadows, the stage features only a piano, a microphone, the guitar across Springsteen’s shoulders and harmonica occasionally across his mouth.

Nothing is as stark as his opening declaration. He confesses in an almost cheery, relieved fashion that he is a bit of a fraud. He’s never done a day’s hard labour in his life, he says. “I have never seen the inside of a factory.” He’s never worked five days a week (“Until these shows. And I don’t like it!”).

But from there, he walks through the key chapters and relationships in his life that allowed him build what he calls his “magic trick”. This opening section is weaved through a stripped-down version of Growing Up that sets the tone for the arrangements to follow. Little of it is calculated to get the audience out of their seats, and when late on the audience does rise for Dancing in the Dark he asks everyone to sit down again, because the show isn’t over yet and “you’re making me nervous”.

Highlights come early on and from lesser-known songs. He talks first about his hard-working, hard-drinking father in profound and moving terms, lending the subsequent My Father’s House with extraordinary weight. He then tells about his mother – her never-ending optimism, love of dancing and how she is seven years into life with Alzheimer’s. He sits at the piano and with The Wish (“I’m older now, but you’ll know me at a glance”) proceeds to reduce many in the audience to sniffling wrecks.

Still, he shifts tone effortlessly. There is a storming version of Tenth Avenue Freeze-Out, made big as a tribute to the “Big Man”, the late E-Street Band saxophonist Clarence Clemons, who Springsteen describes as “elemental”. “Losing him was like losing the rain.” When his wife Patti Scialfa joins him for Tougher than the Rest and Brilliant Disguise, the nuances and glances between them offer a surprisingly intimate moment for those used to seeing them share a stage in front of tens of thousands.

Much of the narrative comes straight from his autobiography, the book which had seemed the epitome of how deep Springsteen has gone into self-assessment as he reaches the far end of his 60s.

Before that had come anniversary editions of his career-defining albums Born to Run, Darkness on the Edge of Town and The River, which could have been industry standards in squeezing every last drop from a back catalogue and dusty tapes. But Springsteen has kept going, delving deeper not simply into the music and how it was made, but into himself and what had made him.

With Springsteen on Broadway, a singer who has always been able to make stadium arenas seem cosy has found new ways to bring his audience close. A book is read at a distance. A documentary is edited at the remove of lens. Here he removes that distance, draws the audience as close as he can, and treats it as a confessional.

It is no better emphasised that during The Promised Land when he walks to away from the mic and sings the last chorus direct to the audience as a reminder of just how small this room is, and how close he is to them.

When it’s over, the theatre empties on to the street. The crowd waiting outside for him is even bigger again, choking the pavement, blocking the front of Longacre Theatre opposite and its Robert de Niro-directed A Bronx Tale.

About 45 minutes after his show has ended, Scialfa and Springsteen emerge out front. Before leaving, he stands on the car’s step and waves at the crowds of delighted fans, passers-by, cops, and disbelieving tourists. Then he’s gone, driving off into the Times Square madness.

The fans head across the street to Hurley’s bar to talk through the show, the experience, the day. And there lingers the question that’s been asked since the record-breaking concert lengths of last E-Street tour. Is the show and that wave part of the long goodbye?

Springsteen is not at the end of his career. There is a promised solo album and the hope of another E-Street Band tour. But this current phase of Springsteen’s career is surely motivated by the knowledge that even he – a man who sweats through four-hour shows without a break – will have to leave the stage some time. That after 50 years he’s found a new and special way to look back is testament to an artist who even settled in to residency is never at rest.