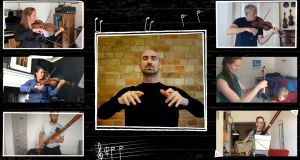 You don’t have to be in pandemic lockdown to get into crazy areas of music-making. Back in 1946, when 78rpm shellac records were the norm, the greatest violinist of the day, Jascha Heifetz, made a recording of Bach’s Double Violin Concerto in which he played both solo parts, dubbing the second one while he listened on earphones to his recording of the first.

It’s an early instance of the kind of multi-tracking that Covid-19 has forced on musicians locked down in their own homes and anxious to find ways of making music with others. Everything and anything is turning out to be fair game as performers seek alternatives to collective live performance while there are restrictions on gatherings and the looming effects of social distancing on concert halls and theatres.

Next up is Irish National Opera’s Seraglio, an eight-part mini-series to be streamed on Tuesdays and Thursdays beginning on July 7th. Mozart’s The Abduction from the Seraglio was the second 2020 offering the company had to cancel, and artistic director Fergus Sheil seems to have been unable to bear letting Mozart’s opera go down the tubes in the wake of the loss of Bizet’s Carmen in March.

Seraglio includes Sheil’s favourite Mozart aria, Martern aller Arten (Tortures of every kind), an extended (nearly 10 minutes), virtuosic, and feistily expressed declaration of resistance against unwelcome sexual advances. The “emotional tug” of the opera led him to try and turn the adversity of cancellation and lockdown “into an opportunity to look at the piece differently”.

Gone would be the familiar processes and landmarks of weeks of communal rehearsal. Instead there was the “scary” prospect of 55 performers working in different countries and continents. The recordings they made on phones, tablets or laptops delivered images and music for video and sound designers who were themselves working in different countries.

It’s all actually a lot messier than even that description makes it seem. The conductor Peter Whelan created guide tracks. “He would record himself giving his view of the music on a piano and send that to the singer to try it out. The singer would let him know they needed a bit more time here, a bit less there. Or faster or slower. This would go back and forth until there was a definitive guide track.”

But that track was not for use in the actual mix. “It was sent to the individual players in the orchestra, so they could work on their part in their own homes, using it as a guide.”

Hiccups along the way included a piano that was out of tune (a lockdown inevitability), which created issues for the tuning of the orchestra. Solution? A perfectly tuned digital piano, which also allowed Whelan to edit Midi files rather than always have to perform the music over again.

“Then we would record the leader of the orchestra — the Irish Chamber Orchestra’s Katherine Hunka — and add her to the guide track so people could hear the style of playing that she had chosen and try and match their own contributions with that.”

Orchestral string players use uniform bowing, decided on by the leader. Details that can quickly communicated when everyone’s in the same place are much more time-consuming when they’re not.

Sheil describes sound designer Ian Dearden, of Sound Intermedia in London, as being “like a sculptor, or — he laughs — maybe somebody piecing something together out of Lego.”

In the end, for Sheil, the big surprise was “the mood, the atmosphere created by being able to see into singers’ houses and the orchestra’s houses. It was touching in a way that I didn’t expect to watch all these people, determined to overcome the obstacles, working from their homes, with kids’ toys or whatever in the background. I found it touching and emotional rather than limiting.”

Conductor Peter Whelan says that taking on the project was “a pioneering step. In that moment, all of the rules are gone. It was a journey into the unknown, terrifying and exciting.” He found it “a bit strange” having to make a video of himself conducting the already laid-down guide track in an empty room in front of the camera. That video was everyone else’s final reference point.

“But every single part of the process,” he says, “is strange, and had new humiliations.” Included in those humiliations is the business of having to watch yourself back. But, he adds, “You learn from that too, of course.”

INO’s company stage manager, Paula Tierney, a rock of solid co-ordination, handled the collection and distribution of sound and video files, as well as PDF copies of Mozart’s music, marked up with points that Whelan wanted to bring to everyone’s attention.

For Whelan, the end result after to-ing and fro-ing between himself and Dearden was “surprisingly good, and pretty impressive given the circumstances”. In addition to handling and shaping the music, he had to provide videos pure and simple, working from shot lists provided by the director, Caitríona McLoughlin, and the video producer, Ellen O’Malley, of Together Digital.

The most trying aspect of the project, he says, was, “the hours and hours of work without any tangible, immediate result,” and the fact that, “something you could do in the rehearsal room with just a lift of your eyebrow takes five emails.”

Director Caitríona McLoughlin came to see the mini-series format as a liberation. “It’s not trying to replicate an opera. It’s its own thing,” she says.

“We’re all scrambling around at the moment trying to create online content to replace live performances. I was never comfortable with that. But I approached the mini-series as a new form. It has new rules. It’s not film. It’s not theatre. It’s not opera. It’s not storytelling. It’s its own new thing. I really got on board with the idea of it,” she says.

“It’s been really good fun trying to find ways of bringing in everything that’s available to you in the digital world, to try and celebrate this music and these arias, in particular. I’ve had a great time with it.”

She retains loose elements of the story, but also wants to acknowledge the world we’re all living in, and find a context in which it would make sense for someone to be singing about someone they were in love with. “I thought there was an interesting parallel between the idea of being abducted and locked up in a seraglio or a harem, and us all being abducted from the world, if you like, and locked into our own houses.”

The 18th-century tensions of the original have been replaced with “a contemporary dynamic where people are playing out relationships through social media and online communication and telephones.”

She has nothing but praise for Peter Whelan, “He’s a natural. Quite the actor,” and nothing but sympathy for the singers, “singing into a vacuum, and being their own crew, their own technician as well.” Her own biggest frustration was, “having a picture in my head and not getting the same picture back into my phone or computer”. She shrieks with laughter after saying this.

Ellen O’Malley sounds as if she is in perpetual awe of what people have been able to deliver from their own homes. “If you saw the spreadsheet and the Dropbox of all the videos and how they’re labelled to make it as easy as possible for us when we put it into Premiere Pro, it’s absolutely incredible,” she says.

“Exporting a project that has 45 different video tracks at once, that’s the biggest size we’ve probably worked with on any project. The fact that machines are capable of doing that is fantastic.” She, too, and her team have worked from home.

Soprano Claudia Boyle, the star of the show, loved working on the project, though she doesn’t have child care at the moment, and had to record while her child was having a nap, or at the weekend when her husband was off.

Would she do it again?

“Of course. Anything to keep music alive. Absolutely. A hundred times over.” But she still longs for “the give and take, the spontaneity of live partnership. I just feel starved of it. I will never take it for granted again.”