U2 at Trafalgar Square? Winning this audience is no battle

Paradise Papers? Not here - the only show worth talking about in London was U2 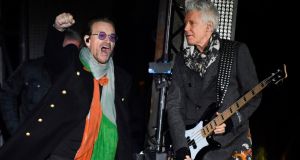 Bono and Adam Clayton of U2 perform with the band in Trafalgar Square in central London during the MTV Presents Trafalgar Square event ahead of the MTV Europe Music Awards tomorrow. Photograph: Chris J Ratcliffe/AFP/Getty Images

Saturday night in Trafalgar Square, London. Four iconic lions flank four iconic Dublin lads as they take to the stage at one of the world’s most famous landmarks. They are Bono, The Edge, Adam Clayton and Larry Mullen jr.

They are U2, one of the greatest rock bands in the world – or THE greatest as Dublin TV Presenter Laura Whitmore introduces them earlier at this MTV organised event.

And while they may be in Trafalgar Square – with Admiral Nelson surveying it all from the top of his column – winning the hearts and minds of the 7,000-strong audience is no battle. It’s not even a skirmish. This we-can’t-believe-our-luck crowd – the tickets were free, and won in a ballot – are going wild.

It’s Armistice Day in Britain, when the fallen of the first World War are commemorated, and to the astonishment of some Irish in the crowd the band begin the night with Sunday Bloody Sunday, which Bono dedicates to the military “and all who lost their lives”.

Earlier, talking to Irish reporters in a nearby London hotel, guitarist The Edge revealed he was wearing an enamel poppy on his lapel. (He also spoke about the Paradise Papers, saying he understood people’s anger at the system.)

Paradise Papers? Not tonight, Josephine. The only show worth talking about in this town was U2 singing eight of their most loved songs from their back catalogue, including two from the new album.

They sing Pride (In The Name of Love), and Bono with his trademark tricolour says it wasn’t a flag he was always proud to wave. They power through Beautiful Day, to the obvious delight of the crowd. “When women around the world unite to rewrite history as herstory, it’s a beautiful day,” says Bono to cheers.

They ignite the crowd with Vertigo, and Elevation is adapted to include a short verse of Star Man, a tribute to the late David Bowie. Another song is interrupted for a short blast of Rat Trap by the Boomtown Rats.

Decorating the stage for this MTV Europe Music Awards organised event are a dozen or so red pillars of light, evoking Dublin’s Grand Canal Square, designed by starchitect Daniel Liebeskind. The light show it spectacular. Those lions have never looked so good.

Introducing Get Out of Your Own Way, one of the new songs from the delayed but highly anticipated 14th U2 album Songs of Experience, Bono reads lines from Gift by the poet Czeslaw Milosz. “A day so happy. Fog lifted early. I worked in the garden. Hummingbirds were stopping over the honeysuckle flowers. There was no thing on earth I wanted to possess”.

What a night in London with MTV...#U2SongsofExperience #U2 #mtvema pic.twitter.com/dSQhX1z6If

"London is the capital city of the world" - U2 in Trafalgar Square... #mtvema #U2SongsofExperience #LondonIsOpen pic.twitter.com/trqf66coA8

The crowd weren’t wanting for much else either.

The MTV Presents: U2 in Trafalgar Square gig was organised to celebrate U2 as the recipients of the Global Icon award at the European Music Awards (EMAs).

Two songs from the live gig will be played at the EMAs, which takes place at the city’s SSE Arena, Wembley tomorrow evening.

The second song from the new album was You’re The Best Thing About Me, the latest single. It soars like the best U2 hits and contains a line about Bono’s big mouth, which he sings is “another great thing about me”.

Before they go to make way for DJ David Guetta, the band run through another rendition of Get Out of Your Own Way again for the MTV cameras. Placards are handed all through the crowd in a nod to the strong tradition of protests in this London landmark through history.

The placards read: Votes For Women. Everything You Know Is Wrong. Resistance. The Edge says he wants a placard with Down With That Sort of Thing. There isn’t, as one observer notes, a placard urging Don’t Avoid Tax. But it’s not a night for that.

This is U2 taking over London, “the capital of the world”, Bono announces earlier, as the Irish contingent break into the inevitable round of Olé, Olé, Olé and the U2 frontman pays tribute to London mayor Sadiq Khan. It’s a meandering meditation on diversity and unity. “There are 300 languages in this city ... 300 languages with each of us thinking that our way is the only way. That’s not going to fly in the 21st century ...”.

Suddenly Bono seems to be boring himself. “Edge get me out of this,” he pleads. And then the iconic strains of One from this most iconic of bands fill the air.

“Ah, you know what I’m saying,” says Bono. And we do. On this very special night in the capital of the world we really do.

Pride(In the Name of Love)

Get Out of Your Own Way

You’re the Best Thing About Me

Get Out of Your Own Way

What to do about George Berkeley, Trinity figurehead and slave owner?
5

‘The beaches are open and people are having a wonderful time’: Why Jaws is still so scary
9