The fairy tune from the Blasket Islands given new life

Muireann Nic Amhlaoibh has put words to Port na bPúcaí, an ancient air full of mystery. And the results are startling 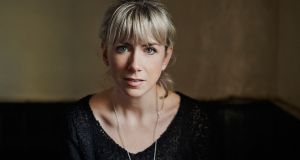 Muireann Nic Amhlaoibh: ‘The song has been getting amazing reactions. I don’t believe it’s really me. It’s the song.’ Photograph: Bríd Ni Luasaigh

Fairies and fairy forts, and tunes borrowed from whales and seals: such is the bread and butter of our traditional music. And in west Kerry, there’s an almost magic realism that we might usually associate more with the literature of South America than with the outer reaches of the Blasket Islands.

Music is knit into the fabric of life, much as salt is in the wind. Recently, that bone-deep music has offered up more surprises, thanks to a bold undertaking by local musician Muireann Nic Amhlaoibh.

Even a fleeting encounter with the Blasket Island tune, Port na bPúcaí (Tune of the Fairies) reveals the intimate kinship that exists between the pedestrian rhythms of daily life and the otherworldly cadences of the natural world. It is a slow air from Inishvickillane whose ghostly timbre is said to embody either whale song or the sound of seals.

Nic Amhlaoibh, a native of Dunquin, has recently recorded it as a song, with lyrics given to her father many decades ago by island fiddle player Muiris Ó Dálaigh. She’s also made a video to accompany the song (youtube.com/watch?v=8C5QqFapcuw), shot on location on the Great Blasket island, in the company of her husband, Billy Mag Fhloinn, doctor of folklore, archaeologist and instrument maker.

Her decision to record a sung version of such an famous tune, and to film it on location was both a reaction to the virtual collapse of the music industry as she knew it, and an attempt to seek out new ways to feed her own primal need to create.

“I’m fully aware now that the album is dead,” Nic Amhlaoibh says, with a nonchalance born of pragmatism. “Nobody’s buying them, and that’s sad in a way, because I love making albums, but I recognise that it’s also good because it’s shaking me out of my routine of making an album every couple of years, and that whole system that I understood and knew.”

Embarking on a journey into this brave new world without the safety net of the musical career path she’s so successfully navigated in the past with Danú and as a solo artist has forced Nic Amhlaoibh out of her comfort zone. That’s not necessarily a bad thing, she admits. Particularly given the richness of the musical world she grew up in.

“I suppose I was thinking that maybe to move forward, I needed to look backwards and to create something that could stand alone as one piece, and not be connected to anything else,” she continues. “One really strong story and theme, with a tune, words and imagery.”

Most people have never heard the slow air sung. In fact, it is normally played with a soulfulness that would seem to render words redundant. Port na bPúcaí occupies a space in Irish traditional music that is similar to that of Blind Willie Johnson’s Dark Was The Night in the world of blues. But Nic Amhlaoibh’s relationship to both local tunes and to her home place is so intimate that she can steer a fine course without ever losing her grip on the essence of the piece of music: the thing itself.

“I knew there were words,” Nic Amhlaoibh, notes, “but my father had said that he’d heard that the words probably didn’t fit the air, even though he had his doubts. When Tom an Oileán gave the lyrics to Dad, he said ‘You can only sing this song if you believe the story’. Imagine that! It’s beautiful.”

The impulse to record the slow air as a song was one that once felt, couldn’t be resisted, and since its appearance on YouTube, has sparked much conversation about the tune’s almost mythic origins.

“I hadn’t sung for a while, and I just needed to sing. I just needed to create something,” says Nic Amhlaoibh. “As it happened, Billy, my husband, had built this crazy instrument called the yaybahar, and for all intents and purposes, it’s an acoustic instrument that creates all sorts of crazy sounds which are very atmospheric. Port na bPúcaí isn’t really the kind of song that you can play a lot of chords behind, but the yaybahar lends a kind of atmosphere, a drone that fits in perfectly with it. Sometimes things just fall into place, and this was meant to be, I think.”

Having grown up in the belly of the beast, so to speak, in the heart of the Corca Dhuibhne Gaeltacht, Nic Amhlaoibh hopes her choice of tune, song and video might act as some kind of conduit for those curious to understand the central place that music occupies in local life and culture.

“I think it’s time to try and give people more of the experience rather than ‘here’s the CD, put it in and listen’,” she muses. “I’m talking about the whole experience: the history, the stories, the language, the landscape: it’s a much more holistic approach. The social aspect of it, the collaborative aspect of Irish music, the sense of community. This is what it’s all about and it’s so hard to put that down on an album, which is very structured and is its own thing.”

The space that traditional music occupies in Nic Amhlaoibh’s life and in the lives of many, couldn’t be more different to that occupied by popular music.

“It’s about the song, it’s not about the singer, and it’s not ever about one performance or one note,” she says. “There’s so much more to it, and I’m understanding that a lot more now, and it’s actually helping me with my performance. The song has been getting amazing reactions. I don’t believe it’s really me. It’s the song.

“So that’s what I want to carry forward in whatever way I can, because we’re all floundering. We’re all at sea and don’t know what we’re at, I think. It’s really hard to make a living out of it, but even if it all went to hell in a handbasket tomorrow, it’s what I am. And it’s who I am. It’s not what I do. And I know that’s true for so many musicians too.”

This is in essence what defines our relationship with Irish traditional music, Nic Amhlaoibh believes.

“We’re not performative as musical theatre or opera is,” she observes. “In those art forms, people are essentially acting, and I don’t think we do that within our own tradition. When I think about people closing their eyes, and sometimes even turning from the crowd, the song takes over, and it’s almost like a possession, isn’t it?

“And the best thing for me as a singer is to just allow it to take over so that you allow your whole body to sing the song. I suppose that’s where I’ve landed at the end of it all!”

Now her father and her daughter Sadhbh join her for Sunday afternoon sessions in Dingle.

“It’s just my favourite thing to do,” Nic Amhlaoibh says, “with people joining in from all walks of life. It’s a shared conversation, and you don’t have to have anything else in common with these people. That’s so healthy for all of us, as opposed to living in a bubble where you only meet the same type of person all the time.”