Aldous Harding: ‘I think a bit of mystery is good’

‘Mysterious’, ‘introverted’, ‘eccentric’ – The Kiwi songwriter has picked up a lot of labels and she’s not bothered 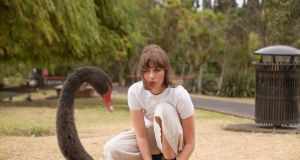 Aldous Harding: new album Designer has been hailed as one of this year’s best. Photograph: 4AD

They say that if you truly want to understand a song, you need to understand its writer. When the writer is Aldous Harding, however, it’s not quite so straightforward.

If you’re familiar with the Kiwi musician’s work, you’ll be aware of her tendency toward the abstract. For example, lyrics from her recently-released third album Designer include, “Looks like a date is set/ Show the ferret to the egg” on the lead single The Barrel, and Damn’s “If a big cold bird tried to bring me a baby/ I feel I would get on his back, kissing his neck”.

It comes as no surprise, then, that Hannah “Aldous” Harding is as difficult to unravel as her songs, although she is no less charming for it. Most of her thoughts take a philosophical slant as she carefully chooses her words, cogitating and ruminating on each question. She is, to put it bluntly, delightfully strange.

I didn’t think I’d be successful at anything. I think I do that in love, as well

Today, the 28-year-old is at home in Cardiff, where she lives with her partner, musician Huw Evans aka H Hawkline (who also plays in her band). She apologises for the delay in calling; the result of her pottery class running over. Of course.

“It was good, although I’m certainly the messiest of the group,” she admits. “I experienced quite a bit of shame today about the state of my work area, compared to other people’s. Then again,” she sighs, “everyone creates in their own way.”

Harding’s creative journey has certainly been unique. She released her eponymous debut in 2015, but it was 2017’s Party that saw her signed to 4AD and break outside of her native New Zealand, where she grew up in a town near Christchurch.

Designer, meanwhile, has been hailed as one of this year’s best, her brand of considered folk and her remarkable, mercurial voice hailed for its idiosyncrasies. She sounds surprised when I call it one of my favourites of the year, but says that playing to a captive audience after Party’s success had no bearing on her approach.

“I’m definitely not above wanting to be liked,” she concedes. “Because, I mean, that feels less . . . lonely? But to be honest, because it was never my dream, I live quite a pressure-less existence, y’know. And of course, that’s not true, but it’s partly true. The pressure comes from myself, and I can’t help but put that on myself when I see myself beginning to be successful at something – because I didn’t think I’d be successful at anything. I think I do that in love, as well; I convince myself that it doesn’t matter, or I don’t really care, or that it’s not for me, and that somehow gives me less of a fright, I suppose. The thing is, I say all of this, and I’m not trying to lead anybody on some kind of goose chase; it’s just how I feel about it right now. It works if I just trust myself, really.”

Designer saw her team up for the second time with producer John Parish, best known for his work with the likes of PJ Harvey, This is the Kit, Eels and more.

“He knows me, and he knows how to get the best out of me,” she says of their working relationship. “And I like him. He likes me. And he’s got good taste. I don’t necessarily know that I’ve got good taste – but maybe the combination of his good taste and my questionable taste makes something interesting. I spoke to him the other day, and I said ‘Look, John, I’m so sorry if you’ve read any of these interviews and I don’t have much to say, or I don’t know what to say. . . we know what it is, and it is what it is’.”

As a kid I remember being frightened all of the time, and kind of sad. I was certainly troubled

There is a wisdom to Harding’s songwriting that belies her age, but she says that even as a child, she had a serious side. Despite both her parents (who divorced when she was young) being musicians, she wanted to reject her creative talent by pursuing an academic career of some kind. At one point, she considered becoming a vet.

“It’s funny,” she says. “I change depending on what I’m around, and who I’m around. I’ve always been like that. As a kid I remember being frightened all of the time, and kind of sad. I was certainly troubled. But a lot of people were, y’know? I don’t really know how to measure my trouble against somebody else’s. So I guess I spent a lot of time wishing I was other places, or wishing I was somebody else, or experiencing something else. Maybe my imagination really drank from that, I’ve got no idea. It’s probably a better question for my mum. She might just go ‘Yeah, well she was a drama queen. She’s fine’,” she laughs. “And then I’ll probably nod and go ‘Yeah, she’s right’.”

There is no question that she is consumed by her songwriting and not necessarily by her career, but as she becomes more well-known, she admits that it can be difficult to balance her public persona with wanting her music to be heard on a wider scale. Previous interviews have portrayed her as difficult to talk to, wilfully monosyllabic or simply unwilling to expound on her craft. She admits that she doesn’t like doing interviews, “but at the same time, I don’t want to be that person who creates something interesting and has [being a difficult interviewee] as their ‘thing’.

“When I’ve been understood, or when [my work] has been recognised as a positive effort, that’s my goal. So to then turn around and go ‘Whyyyy are people so interested in me?’,” she jokes, putting on a whiny voice. “If I agree to do an interview, I think that I should be on board. I know in the past I have been standoffish, and some days I will be like that. But I want everyone to do well; I want you to do well, I want me to do well, and I don’t want to shame people for asking questions. So this is a shame-free zone.

“[The fame thing] is funny. I go between demanding respect and then losing people’s respect quite happily,” she chuckles. “I’ve always gone ‘Why don’t you like me? Why don’t you like me? Love me!’ and when they say ‘Okay, I do’, I’m like ‘Okay – seeya’! I don’t really wanna be famous, because I don’t know that I could carry that. I don’t really think about that too much, because as long as I’ve got my head screwed on and I’m not disappearing for days and things like that, everything should work out.”

I am just an unremarkable person trying to do remarkable, interesting things

“That’s just people making observations within the limits of what they’re seeing, in terms of their understanding and their references,” she shrugs. “I do the same thing. I’ll watch someone and I’ll be like ‘Oh, they’re like xyz’ and then I’ll hang my head in shame. But then, if you’re always checking yourself like that, you won’t have the balls to experience anything, or comment on anything. So I don’t really shame people for that; I’ll say ‘Oooh, you’re wrong’ in my head, but I’m not gonna start some sort of weird witchhunt and make them check their opinion of me. But it’s funny that you say eccentric and mysterious. I think a bit of mystery is good, and I used to feel like an eccentric person pretending to be normal. But I am actually just a normal person seeming eccentric, by what I’m putting myself through. Because I am just an unremarkable person trying to do remarkable, interesting things.”

It’ll come as no surprise to discover that songwriting, despite her obvious talent, is not something that she particularly enjoys.

“Sometimes I don’t know the difference between what I like to do, and what I like to have done,” she says. “For example, do I like writing songs? I dunno, it can get pretty spooky to tap into that, and it’s not always pleasant. It can feel like your hand is kind of off the handle to get to those places; lots of creative people find that. So do I like writing songs? Not particularly. But do I like having them done? Yes. And I’ve got lots to do.

“I’m just trying to be clever, y’know? Trying to write good songs. Some of them flow out of me, and others I’ve really gotta think about what’s gonna go where, and why. It’s not consistent, and it’s certainly not rocket science.” She pauses again. “I don’t know why some work and some don’t.”

In any case, she says that she will continue down this musical path for as long as it brings joy into her life.