Stevie Wonder in Dublin: Sound problems, self indulgence and some truly wondrous moments

Would we have paid as much for a gig advertised as ‘Stevie Wonder listens to record he likes’? 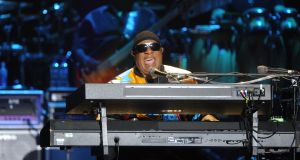 So Stevie Wonder has invited me and some close friends to a “Song Party” to “celebrate life, love and music”. Okay it’s at the 3Arena and there are several thousand other close friends present but the 69-year-old musical sage has a knack of making us all feel personally invited, so I’d forgive him anything.

Over the course of two hours the colourfully-jacketed oldster grooves around an array of comically differently sized instruments from big whopping pianos to teeny tiny electronic devices to teenier tinier harmonicas.

All the time he is bolstered by a 17-strong-band of virtuosic musicians and singers, all intent on helping him cross the streams of progressive pop, rock, jazz and soul, while the audience dance and wave the customised glowing bracelets they were given at the door.

Okay, the bad stuff first: there are some sound problems. I mean are the over-excitable percussionists really the most important element in a Stevie Wonder performance?

And there is a heap of self-indulgent stuff. Some of this is good. It’s nice to see his son Kailand Morris join him on drums and the long section in which each of his backing vocalists gets to show off their chops is great.

Though I probably could do without the endless instrumental harpejji version of Mrs Robinson and the long warbly vocoder jam that makes me feel like I’m going mad.

And while I like when he organises a girls-versus boys singalong, I feel like the decision to lead a thousand Irish people into a chant of “Say it loud, I’m white and I’m proud” was a bit misjudged. (It causes a lot of us to wonder, for the first time in their lives, if it would be more impolite to disobey Stevie Wonder or to chant what amounts to a white pride slogan.)

And then there’s the baffling midsection during which the DJ plays some records he likes (including Let’s Dance by David Bowie and Rehab by Amy Winehouse and Billie Jean by Michael Jackson) while Stevie just sits there beaming.

I mean, it’s Stevie Wonder, if he wants to sit on front of a few thousand people listening to songs he likes I guess he’s earned it. But I’m not sure everyone would have paid so much if this was advertised as, “Watch Stevie Wonder listen to record he likes.” Ah feck it, I’d have come anyway. It’s Stevie Wonder.

And here’s the thing, when his arrangements and his grooves and his melodies hit their stride there’s nothing like it. When the sound mix is working, the backing vocals, guitars and keys and brass weave around each other in harmony and counter-melody so effortlessly they form all new textures and it’s hard to tell them apart.

His musical imagination is joyous but that joy always feels grounded enough in the gritty realities of life to really mean something. It’s embedded, not just in his lyrics, but in his delivery and his arrangements.

So when his music is transcendent, like it is on the wonkified jazz of Sir Duke or the Lego-brick soul of I Wish or the chamber-music funk of Superstition or the anti-racist groovery of Living for the City or his gospel reimagining of John Lennon’s Imagine, it feels like he’s taking us with him to the Higher Ground … of which he also sings.

And his voice is still near perfect, managing to move from a textured baritone to those bright Little Stevie registers of yore, and this all despite an upcoming kidney transplant. Seriously, if the man wants to listen to records on stage or noodle around on Simon and Garfunkel songs or get us to chant inadvisable things, it’s totally up to him. “Don’t you worry bout a thing,” he sings. And I don’t. I really don’t. It’s wondrous.