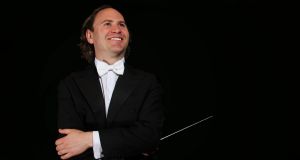 Venezuelan conductor Christian Vásquez is at the NCH, Dublin, on July 17th.

The rather unwieldy full title of Brian Irvine’s new opera is a fair indication of the complexity of its subject matter. Rosemary Kennedy (1918-2005) was the intellectually disabled sister of JFK who, at the age of 23 was subjected to a lobotomy which severely incapacitated her for the rest of her long life. Irvine co-created the opera with its director, designer and video designer Netia Jones, and the work is as concerned with the power structures, medical practices and attitudes to the disabled which facilitated the lobotomy as it is with the specifics of Rosemary’s life, which can no longer be fully pieced together. The wider interests of one of America’s greatest families seem to have been pitted against the best interests of one of its own children. The cast is small, a singer (Naomi Louisa O’Connell) and two actors (Stephanie Dufresne and Ronan Leahy), and Irvine, who straddles the worlds of classical music and jazz, has included improvising musicians in his orchestral line-up. The Irish National Opera Orchestra is conducted by INO’s artistic director Fergus Sheil.

Venezuelan conductor Christian Vásquez opens his National Youth Orchestra of Ireland programme in the east, with Tchaikovsky’s Symphony No. 2. The symphony is nicknamed the Little Russian because of its use of Ukrainian folk tunes – Ukraine was known as Little Russia when it was part of the Russian empire. The musical choices then work westward, and forward from the 19th century, to Spain (for three dances from Falla’s The Three-Cornered Hat), Mexico (for Moncayo’s Huapanga and Márquez’s Danzón No 2), Argentina (dances from Ginastera’s Estancia) before ending in Brazil (Abreu’s Tico Tico)