The best rock and pop gigs of the week 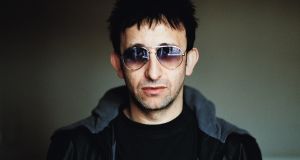 IWD x 4th Birthday with Anu
Electric, Galway
To celebrate their fourth birthday, the Gash Collective has booked in its first international guest of the year. Anu is a DJ and illustrator from London and, with a monthly slot on NTS that focuses on experimental techno and new wave, she has a firm hold on the airwaves as well as the live music scene. Have a goo at her Boiler Room set from 2017 for a sample of what’s to come. Support on the night comes from Gash Collective’s very own Lolz. LB

Eden
Olympia Theatre, Dublin
From the Eden Project (back in the day) to Eden (right now), classically trained Irish musician, songwriter, producer Jonathan Ng has advanced the notion that the more diverse you can be, the better it is for your creativity. Eden is among a sizeable number of Irish artists making a genuine impact outside of the country. His output is quite prolific, as befits an artist that prefers experimentation over dawdling. His recently released second album, No Future, was described by Éamon Sweeney in this paper a few weeks ago, as “a tender and emotional hip-hop and R’n’B-infused pop odyssey.” TCL

Halsey
3Arena, Dublin
American songwriter Ashley Frangipane shows no let-up with the confessional songwriting. Her 2017 album, Hopeless Fountain Kingdom, focused on the downsides of romantic involvements, while her most recent, Manic, filters the faultless from the flawed. The central tenet of the album is a quote from Michel Gondry’s 2004 movie Eternal Sunshine of the Spotless Mind (“I’m just a f***ed-up girl looking for my own piece of mind. Don’t assign me yours”), so you know, more or less, what to expect here: personal songs that don’t hold back on honesty, powerful and riveting performances, and no-nonsense deliveries. TCL

Ludovico Einaudi
Bord Gáis Energy Theatre, Dublin; also Friday 13, same venue
Turin’s Ludovico Einaudi may have started his career as a composer, but he has now crossed over into an area that embraces electronic music far more than classical. His most recent work is the expansive, ambitious Seven Days Walking, a seven-disc collection that was released in monthly instalments from March to November last year. Inspired by frequent walks in the Alps, the albums have been immensely successful, which is surely the reason why these two shows sold out months ago. Expect representative swathes of glacial but gorgeous electronica, with strings by Redi Hasa (cello) and Federico Mecozzi (violin). TCL

Mo’ov’us
Lost Lane, Dublin
Mo’ov’us is presented by Nialler9 and directed by Rusangano Family’s God Knows. It’s an integral part of the official St Patrick’s Festival programme and celebrates Irish rap, hip-hop and its variants with a collection of acts from around the country. Raise your glasses and cheer on the likes of the aforementioned MC God Knows, rapper/spoken word artist Denise Chaila, producer/beats master Bantum, and a rake of other vibrant people such as Farah Elle, Murli, Citrus and Hazey Haze. TCL

Tim Chadwick
Whelan’s, Dublin
If you’re looking for an Irish act to add to your ever-growing pop library, then Tim Chadwick is a fine contender. 2019 was a big year for him – he supported Mabel at her sold out Dublin shows and got plenty of radio play for his single I Need to Know – but this year, he is gearing up for more. With four singles lined up for 2020, the first of the bunch is Sore Thumb and it lands somewhere on the sound scale between Troye Sivan and Maggie Rogers. Dreamy. LB

Lethal Dialect
The Button Factory, Dublin
To welcome his new album LD 50 Part 3 into the world, Lethal Dialect (aka Paul Alwright) has booked in his biggest headline show to date. He is a treasured name on the Irish hip-hop scene and shares stories that speak to the heart and the gut. This gig will see him look back on his entire back catalogue, documenting how far he’s come and marking the next step in his journey. LB

Country to Country
3Arena, Dublin; also Saturday 14/Sunday 15, same venue
Country to Country is now in its eighth year and continues to feature a range of US acts, some of which haven’t impinged on a mainstream audience in Europe. The likes of Eric Church, Darius Rucker and Luke Combs sell out shows all over America, and are well-known enough, of course, but what of Old Dominion, Charles Esten, Jordan Davis? Country music fans of the old-school variety are served well by the appearance of Tanya Tucker, while the Americana crowd will no doubt be glad to know that Old Crow Medicine Show will be performing over the weekend. TCL

Alternating Current
The Sound House, Dublin
As the rest of the city goes big, green and brashy this Paddy’s weekend, Alternating Current is the brand new three-day festival that showcases the best, “the weird, the eerie, the noisy, the loud and lamenting” in the underground Irish music. Featuring performances from PostPunk Podge, Fixity, Cáit, Ellll, Lolz, Unscene Music, Woven Skull, Maija Sofia and many more, the programme is lovingly devised and run by the good heads from Dublin Digital Radio, Enthusiastic Eunuch and Tiny Cosmos. A weekender ticket will cost you €65. LB

Standing, Sitting, Lying Down
The Space Between, Dublin
If you usually rely on complaints like “I’m too tired” or “I’m too old” as an excuse to not go out, you have no reason not to attend Standing, Sitting, Lying Down, an immersive audiovisual event that invites you to experience the show in one of those postures. With live ambient electronic performances from Sorca McGrath (Ships), R Kitt, Glenn P Keating, Linda Buckley, Dunk Murphy and Sharon Phelan, and visuals from Algorithm, this is a bespoke event for people who want something different. LB

The Stunning
Olympia Theatre, Dublin
If there is a lesson to be learned from The Stunning’s continued popularity, it is to never give up. The two mainstays of the band, which formed in Galway in 1987, are brothers Steve and Joe Wall, the former now also pursuing an acting career, the latter as a lecturer at Dublin-based BIMM music college. This show is sold out, but fans are advised that the band return to the same venue in September. TCL

Nada Surf
Button Factory, Dublin
With a grand total of 30 years under the belt, it’s good to know that New York’s Nada Surf still haven’t given up trying to outdo themselves and their back catalogue of nifty pop-punk songs. From their 1996 debut album, High/Low, to the recently released Never Not Together, the group have become the poster act for good, old-fashioned pop with guitars. In other words, if you have a hankering for the likes of Big Star and Beach Boys crashing into The Replacements, REM and The Posies, then come on in – you’re welcome here. TCL

Lightning Seeds
Limelight, Belfast; also Sunday 15, Academy, Dublin
There is a tight cohort of music fans who will die on the hill that claims Liverpool’s Lightning Seeds as one of the best (if not the very best) British pop groups of the past 30 years. Lead songwriter and singer Ian Broudie certainly has a knack for writing indie-pop earworms (these include Pure, The Life of Riley, Lucky You) although his output hasn’t been busy for some time. Admirers of the band will no doubt be on high alert at these two shows, however, because alongside the well-known tunes there will be new material that Broudie is currently shaping into a new Lightning Seeds album. TCL

Mount Alaska
Pepper Canister Church, Dublin
Irish musicians Stephen Shannon and Cillian McDonnell have separately and together been around the houses, so they aren’t newbies to the occasional tangled web of music industry false starts. Such mutual experience seeps into their present music project, Mount Alaska, which recently persuaded anyone with a pair of ears to sit down and take notice of blissful soundtrack music that tipped a hat or two to ambient/electronic music composers such as Jóhann Jóhannsson, Wendy Carlos, Ólafur Arnalds, Max Richter, and Delia Derbyshire. Special guests are Slow Moving Clouds, which deliver star-gazing work comparable to The Gloaming and Sigur Rós. Also on display at this show will be a lighting experience designed by artist Steve Mac Devitt. TCL

Helena Hauff
Electric, Galway; (Also Monday 16, District 8, Dublin)
Qualm, Helena Hauff’s 2018 album, is a dark and moody combination of acid house and harsh industrial music that feels bigger than your laptop speakers will allow. Thankfully, you don’t have to ponder the potential largeness any more as she comes to Galway to give you your money’s worth. The German DJ is not just heralded for her amazing song titles (shout out to Fag Butts in the Fire Bucket) but she’s a top draw at music festivals across the world too. LB