Canadian singer to perform in Ireland in October 2020, with tickets on sale next week 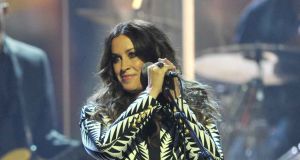 Alanis Morissette will play at the 3Arena in October as part of a European tour. Photograph: Sonia Recchia/Getty

Alanis Morissette has announced she will play Dublin’s 3Arena in October as part of a European tour, with tickets on sale next week.

The seven-time Grammy winner will kick off the arena tour on September 23rd in Copenhagen, with the Dublin gig taking place on October 1st.

The tour marks 25 years since Morissette launched her platinum-selling album, Jagged Little Pill, and coincides with the release on May 1st of her new album, Such Pretty Forks In The Road. Her latest single, Reasons I Drink, was released in December 2019.

The Canadian singer last played in Ireland in July 2018, with appearances at the Iveagh Gardens in Dublin and the Marquee in Cork.

Supporting Morissette on tour will be American singer-songwriter Liz Phair.

Tickets for the Dublin date will be released on February 28th at 9am on Ticketmaster, with prices starting at €67. Pre-sale tickets will be available on February 27th.