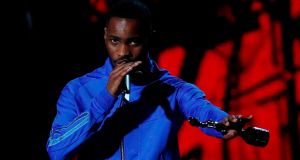 Dave: ‘The truth is our prime minister’s a real racist.’ Photograph: Adrian Dennis/AFP via Getty Images

Rapper Dave has accused Boris Johnson of being a “real racist” during his performance at the Brit awards in London on Tuesday night. The south London star performed his song Black at the ceremony at the O2 Arena in London, but added new verses at the end.

He rapped: “It is racist whether or not it feels racist/The truth is our prime minister’s a real racist.”

The rapper (21), insisted that “equality is a right, it doesn’t deserve credit”.

Commenting on the treatment of Meghan Markle by the British press, he said: “Now if you don’t want to get it then you are never gonna get it/How the news treats Kate versus how they treated Meghan.”

Dave also paid tribute to London Bridge attack victim Jack Merritt, who he called “my brother in arms”. “There’s tears in our eyes and love in our hearts,” he said. “We never had the same background, culture, colour or class but you devoted your life to giving others a chance/And for that I’m so taken aback because you gave us all a voice.”

Finishing up, he called for “reparations for the time our people spent on plantations”.

Labour leader Jeremy Corbyn appeared to endorse the message, tweeting the lyrics to his 2.3 million followers.

Responding to the prime minister being called a racist, the home secretary, Priti Patel, said it was “utter nonsense” and Johnson was “absolutely not a racist”. In a round of media interviews on Wednesday morning, she added: “Artists and entertainers say all sorts of things.”

Dave along with singer-songwriter Lewis Capaldi were among the big winners at a male-dominated Brit Awards. There was disappointment for Irish singer Dermot Kennedy, who lost out to Tyler, the Creator in the best international male artist category.

Glaswegian singer Capaldi took home the song of the year and best new artist awards, while Dave won the coveted album of the year gong for Psychodrama. The album was released in 2019 and topped the UK album chart, and also won last year’s Mercury Prize

The pair led the nominations prior to the ceremony, with both artists securing four nominations in the same categories.

No women won any of the awards which were not gender-specific after securing just four nominations out of a possible 25 in the categories.

After picking up the male solo artist award, Stormzy paid tribute to the women in his team.

“To be the best male, I have got the most incredible females in my team,” he said. You lot are the greatest, the best male is nothing without the best females. I love you guys. “To every single person who supported me, I love you. Thank you guys.”

It is only the fifth time best male has been won by a non-white artist.

Mabel, who won the best female artist gong, opened the show at the O2 Arena with her song Don’t Call Me Up. She said that it felt like a “full-circle” moment after her mother, musician Neneh Cherry, performed at the ceremony decades earlier. Prior to her performance, she said on the red carpet: “It’s actually 30 years since my mum performed at the Brits and it’s just so amazing and such a lovely, sort of full-circle moment.

“Mainly I just feel so honoured to be here tonight, it’s been such a journey”.

It is the 12th time best female has been won by a non-white artist.

Other winners included Billie Eilish, who won best international female solo artist. Eilish, who performed her new James Bond song during the ceremony, said London felt “like a second home” to her and that seeing the crowds made her emotional. “I have felt very hated recently,” she said.“When I was on stage and I saw you guys all smiling at me it genuinely made me want to cry and I want to cry now.”

After picking up his award, Tyler, The Creator made fun of former British prime minister Theresa May, who he said had previously stopped him entering the country.

He said: “Thank you Theresa May.

The ceremony, which was celebrating its 40th anniversary and hosted by Jack Whitehall, opened with a tribute to the late former Love Island host Caroline Flack, who was found dead on Saturday having taken her own life.

Whitehall said she was “a member of the Brits family” during his opening monologue, adding that she was “a kind and vibrant person with an infectious sense of fun”. “She will be sorely missed. I’m sure I speak for everyone here when I say our thoughts are with her friends and family.” – Guardian/PA

Brushing up on your high culture? Forgive my scepticism
10