Groove to the sound of The Growlers, Sprints, Kaiser Chiefs, Endo Sleater-Kinney and more 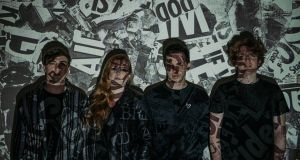 Sprints
Whelan’s Upstairs, Dublin
Dublin band Sprints have been around a short while, but so far they have made a hefty impact with songs such as Pathetic (“their punk-edged sound is visceral” – Clash), The Cheek (“a bone-rattling garage-pop gem” – The Last Mixed Tape), and new single, Kissing Practice. This show is sold out, but if you’re sharpish you’ll get to see them in Ballina, Co Mayo, at the end of the month when they perform as part of the event’s Music Trail. TCL

Lumo #53: Delirio Disco
Yamamori Tengu, Dublin
If you feel like your life has been lacking in “giddy disco, bouncy rhythms, pew-pew noises and euphoric tunes” then the Lumo lads have whipped up a night just for you. Join Nialler9, Simon Roche and Gav Elsted for their monthly night that wants to drum up the atmosphere of a house party. While they’re not explicitly anti-smoking, they want to keep you on the dance floor and away from the smoking area. You could say that it’s the place to vibe and not vape. LB

Kaiser Chiefs
3Arena, Dublin
Twenty years after they formed in Leeds, 15 years after they scored a Top 10 UK hit with I Predict a Riot and less than one year after their UK Top Three album, Duck, it seems Kaiser Chiefs have weathered various storms over the past two decades. They are not, then, a critics’ choice but rather a people’s music act, and one with at least ten songs that can make a gig pass by with a hum and a whistle. Special quests are another UK music act, Razorlight, and emerging (and most interesting) Irish act, Somebody’s Child. TCL

The Growlers
Button Factory, Dublin
Anyone for Beach Goth? That’s the catch-all description used for California’s The Growlers. Since their formation almost 15 years ago, they have fused psych, surf and garage rock into one big swell of noise, releasing six studio albums. The latest is last year’s Natural Affair, which had the likes of diymag.com praising the band as “masters of blending catchy pop choruses with dark, sleazy grooves, of mixing unabashed optimism with after-hours vignettes of neon lights and cheap red wine.” If that sounds like your cup of grog, get thee hence. If you have a ticket, that is – the gig is sold out. TCL

Das Cabinet des Dr Caligari
St Ann’s Church, Dublin
One of the most garlanded films in movie history is Robert Wiene’s Das Cabinet des Dr Caligari, which premiered in Berlin 100 years ago (to the day). To celebrate this centenary, a group of highly regarded Irish musicians (Adrian Crowley, Sean Mac Erlaine, Matthew Nolan, Neil O’Connor) and an equally admired UK one (Barry Adamson) have teamed up to create a new score, which will be performed live. Presented in partnership with Dublin Business School Faculty of Film and Creative Media, and introduced by Dr Piotr Sadowski, prepare for goosebumps. TCL

Ross from Friends
Seven, Galway; also Thursday 27th, Dali, Cork; Friday 28th, 39/40, Dublin
You could be forgiven for thinking that David Schwimmer has taken a total swerve with his career with this one. Alas – or rejoice! – because it’s British producer and DJ Felix Clary Weatherall instead. His debut album Family Portrait was released in 2018 on Flying Lotus’s record label Brainfeeder and with layered meshings of house and electro, it’s a trippy, transformative and pulsating delight. Robert Kardashian imitations aside, Schwimmer hasn’t got a patch on him. LB

Lennon Stella
Róisín Dubh, Galway ; also Saturday 29th, Liberty Hall, Dublin
The achievements of Dubliner Dave Robinson have been largely undocumented. That’s a pity, as he can lay claim to numerous things, not least being the person who facilitated the London-based pub rock music scene (which created a network of over 30 pubs where emerging bands could play original music) and who co-founded Stiff Records. That indie label gave the world such diverse talents as Elvis Costello, The Damned, Kirsty MacColl, Ian Dury, Wreckless Eric, Lene Lovich, Madness, and The Pogues. When Stiff wilted, Robinson became president of Island Records. The list goes on, but Robinson is here, specifically, with the story of Stiff, so expect anecdotes aplenty and music. Lots of music. TCL

Endor
Cyprus Avenue, Cork
Every now and again, a song with an over familiar sample trickles its way into your orbit and you can’t help but simultaneously  feel old and want to murder whoever cleared the rights for the song from your past. The latest in this line of torture is Brighton producer Endor’s remixed and reworked version of Pump It Up, the 2004 Euro-dance single by Belgian artist Danzel. Not necessarily better and not necessarily worse, it’s a song that simply makes you ask “why, god why?” LB

Other Voices
Various venues, Ballina, Co Mayo; also Saturday 29th
Other Voices returns to Ballina less than 18 months after its highly successful debut in the town. Alongside the OV Ballina Music Trail (which features a rake of emerging and semi-established Irish music acts), free gigs in venues across the town, and the multi-disciplinary creative discussions event, Ireland’s Edge, there is music in St Michael’s Church from the likes of Jesca Hoop, Denise Chaila, Skinny Living, and Elbow. Nabbing the latter music act is a major coup for Other Voices and will give lucky fans a unique opportunity to see the band perform in an intimate space before their 3Arena show next month. TCL

Homebeat Social #1
The Sugar Club, Dublin
Homebeat Social is the latest party created by the good team of Homebeat which aims to be a one-stop shop for your weekend socialising. Providing live acts, live electronic performances and DJs under one roof in an event that will happen thrice this year, it wants guests to arrive early and stay until lights up. The maiden event has an incredible line up, with the Glasshouse ensemble playing Aphex Twin’s music, the lo-fi and soul group Uly and cosmic pop act Tomorrows on the bill. LB

The Blast Off Tour
3Arena, Dublin
You may need to sit down for this one. For one night in Dublin, in the one venue, you can catch household (ahem) names such as Nelly! Shaggy! Salt N Pepa! Mya! Blu Cantrell! UK Garage All-Stars, featuring So Solid members Lisa Maffia and MC Romeo, MC DT, Oxide & Neutrino, DJ Luck & MC Neat and Sweet Female Attitude! And a mystery act! All hosted by Fatman Scoop! Christ. It’s Christmas, Halloween and the MTV Video Music Awards from 2001 all rolled into one event. LB

Kieran Goss & Annie Kinsella
Theatre Royal, Waterford ; also Saturday 29th , Ramor Theatre, Virginia, Co Cavan; Wednesday, March 4th, Lost Lane, Dublin
Readers of a certain age will recall Kieran Goss as a superb songwriter and on-stage presence who could cause your eyes to brim over with tears via his heartfelt, honest songs and then crack you up with between-song patter. The years pass, and while he may not have the same profile in Ireland he once had (he should worry – Europe loves him and partner Annie Kinsella), there’s little doubt that anyone who is after an evening of insightful singer-songwriter material (and wit) should make a point of catching one of these shows. Goss and Kinsella will be performing tracks from their debut duo album, Oh, the Starlings, and the gigs form part of a nationwide tour that continues throughout March. Further details from www.kierangoss.com TCL

Grace Queer Rave #09
39/40, Dublin
With one year down, Grace is a night that has really served Dublin’s nightlife in a way that most others cannot. Providing a safer space for LGBTQ+ people to party, they call in some of the best and most innovative DJs from home and afar to create a hardcore techno night that’s unlike any other in the country. Promoting consent, individuality and respect as part of their ethos, they’ve successfully created a space for people to reconnect with music. Here’s to many more years of Grace. LB

Sleater-Kinney
Over 25 years later, and still US group Sleater-Kinney are making the right kind of racket that remains all too relevant. Originating in the US in the early 1990s as part of underground feminist punk movement riot girl, the band have been hugely influential ever since. Following the departure last year of long-standing member Janet Weiss, Sleater-Kinney are now down to the core duo of Carrie Brownstein and Corin Tucker. Let us not dare dwell on sonic shrinkage, however, as the band’s latest album, The Centre Won’t Hold, delivers as good as they ever did: direct, economic, precise, hungry, angry. TCL

The Butchers: masterful plot about pandemic and upheaval
8