With more than 20 events over four days, the festival features the best in contemporary music 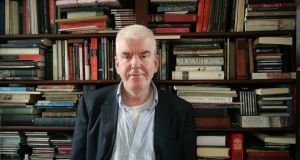 UCL’s own website has a simpler headline, “Sitting in the cinema boosts heart rate”, but, like much of the coverage, omits to point out that the relevant research, conducted by Prof Joseph Devlin, was carried out with Vue Cinemas. Some of his earlier research, carried out in association with Encore tickets in 2017, has a UCL headline saying that “Going to the theatre [the West End musical Dreamgirls] can have the same impact on your heart as 30 mins of cardio exercise”.

I suppose what it all boils down to is that if you get excited your heart rate goes up. Better go to a rugby international, then, or enjoy the excitement of the mud at one of the big outdoor music festivals.

One of the features of cinema and theatre going noted by Devlin was that “regardless of whether they arrived individually or in a group, as our audience members watched the film [last year’s Aladdin], their heart rates became more closely aligned”.

Even though his star has risen spectacularly, Gerald Barry is still a divisive figure

It’s easy to see the sense of it all. If a character in a film is in danger, about to meet the love of his or her life, or moving into a moment of triumph, most everyone watching picks up on what’s happening. Just like people roar and cheer at the same time at sports events.

I’m sure the synchronicity can be found at classical concerts, too, for the blaze in the finale of Beethoven’s Fifth Symphony, the terror in Schoenberg’s A Survivor from Warsaw, the relentless machine that ends Prokofiev’s Seventh Piano Sonata or the giddy delights in Tchaikovsky’s Nutcracker.

But what kind of synchronicity will be found during this week’s New Music Dublin festival (which runs from Thursday to Sunday, mostly at the National Concert Hall)? Not quite as much, I suspect. Think of, say, the microtonal nuances in Morton Feldman’s For John Cage, a 75-minute work for violin and piano from 1982 that opens the festival (Darragh Morgan with John Tilbury) or the strenuous viola workout that is Gerald Barry’s Viola Concerto, first heard last year, which gets its Irish premiere in the closing concert on Sunday (Lawrence Power with the RTÉ Concert Orchestra under Ilan Volkov).

Even though his star has risen spectacularly, Barry is still a divisive figure, a composer whose often thrilling directness still manages to hit certain listeners in the wrong place. And the same is true of composers in almost any concert in the New Music Dublin schedule.

Festival director John Harris is well aware of the issue. He offers what he calls “a myriad of creative musical endeavours” and hopes that “you will approach all of this music on offer in the Festival in a way that suits you”.

He offers encouragement to people “who enjoy discerning and following interconnecting threads” just as he does to anyone who is “just here to enjoy the occasionally mind-bending clashes of ideas, styles, people and sounds that inevitably occur within these intense few days”.

The sheer size of the festival — more than 20 events over four days — set me thinking about the ground-breaking Dublin Festival of 20th Century Music, which was held for the first time in 1969, and which is widely credited with having helped to haul Ireland, musically speaking, fully into the 20th century.

That festival had just 10 concerts, and brought Ireland a generous sampling of electronic music, featuring works by Pierre Schaeffer, Mario Davidovsky, Luciano Berio, Karlheinz Stockhausen and Tristram Cary (who was also responsible for the sound on the day).

The taste of the time is interestingly reflected in the names of the composers whose work was featured in multiple concerts, Bohuslav Martinu, Olivier Messiaen, Alan Rawsthorne, Gerard Schürmann, Igor Stravinsky and Anton Webern. And, just as New Music Dublin hosts “up-and-coming Irish composers” in Crash Ensemble’s Free State 12 in 2020, the 1969 programme also had a slot for “young Irish composers”.

All five composers back then — Bruce Graham Hersey, Philip Martin, Derek Ball, Raymond Deane and Eric Sweeney — were aged under 25. This year the youngest is 26, and the average age is 31. It’s an interesting question, given the much larger number of composers in Ireland today, why the age of the composers chosen for such similar platforms should have risen rather than fallen.

Youth of a different kind features this year through a concert by RTÉ’s two youth choirs, RTÉ Cór na nÓg, and RTÉ Cór Linn, in the premiere of Seán Doherty’s new We Must Create, which was specially commissioned for the festival. Breadth of appeal and breadth of representation are important now in other ways, too. No female composers were featured back in 1969, and their absence seems to have been utterly unremarkable at the time.

Some things haven’t changed. The Irish Times music critic of the time, Charles Acton, previewed the festival saying, “Event of highest interest. Good opportunity for those unfamiliar with modern music to hear enough of it to get an impression.” Not a million miles away from John Harris. And musical instruments were as attractive to photographers then as now. The paper carried a photo of John McCabe reaching in under the lid of a grand piano, and the caption described him as having “developed a technique of using a beater on the strings of the piano to produce an unusual effect”.

The image would work every bit as well today.