The best classical music to see this week

The Irish Language Art Song Project , the next in NSO’s Bruckner series and pianist Simon Trpceski 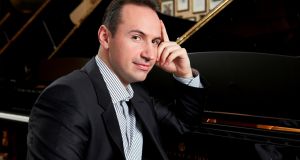 It was quite an undertaking. The Irish Language Art Song Project dreamt up by Dáirine Ní Mheadhra and John Hess commissioned 50 songs from 17 composers. The songs, which are already available for free online (as recordings and as scores) are now being performed over three nights at the NCH. In the first concert, sopranos Anna Devin and Daire Halpin, with John Hess at the piano, perform songs by Ana Sokolovic, Garrett Sholdice, Oscar Strasnoy, Ashkan Behzadi, Jonathan Nangle and Kevin O’Connell. Devin and Hess are joined by mezzo-soprano Rachel Kelly in songs by Ryan Molloy, Linda Buckley, Anna Pidgorna, Andrew Hamilton and Jennifer Walshe in the second concert on Wednesday. And in the final concert, on Thursday, March 12th, soprano Magali Simard-Galdès, tenor Gavan Ring, and pianist Louise Thomas, perform songs by Deirdre Gribbin, Ailís Ní Ríain, Raymond Deane, John Kinsella and Ann Cleare.

North Macedonian pianist Simon Trpceski is including some of the music of his most recent CD, Tales from Russia, in his programme at the NCH – Prokofiev’s Tales of a Grandmother, and an arrangement of Mussorgsky’s Night on a Bare Mountain. The evening opens with Brahms (the Variations on a theme by Robert Schumann) and Liszt (some of the Schubert-inspired Soirées de Vienne), and ends with one of the piano repertoire’s great showstoppers, Prokofiev’s Sonata No 7.

The RTÉ NSO’s chief guest conductor Nathalie Stutzmann returns for the next instalment in the orchestra’s Bruckner series. Stutzmann has paired Bruckner with Wagner, opening with the Prelude and Good Friday Music from Wagner’s Parsifal, and ending with Bruckner’s Seventh Symphony. Bruckner claimed to have composed the Adagio “partly in premonition, partly as funeral music after the catastrophe”, the catastrophe being the death of Wagner, though dates on the autograph contradict this. Either way, Stutzmann’s pairing is entirely apt.