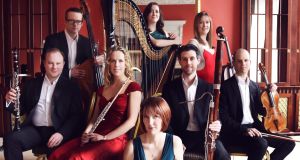 Ficino Quartet
NCH Kevin Barry Recital Room, Dublin
The Ficino Quartet has put together one of the most intriguing programmes of the National Concert Hall’s Sunday afternoon string quartet concerts. There’s just one work from the standard repertoire, Haydn’s Quartet in D, Op. 76 No. 5. The Haydn is framed by Thomas Adès’s The Four Quarters of 2011 and Donnacha Dennehy’s STAMP (to avoid erotic thoughts) of 2008, the first inspired by the cycling of a day, the second by an irregular 14th-century Italian saltarello from a manuscript in the British Museum. The players then jump back to the mid-1940s, for the String Quartet in A minor English composer William Walton wrote for the Blech Quartet.

Christmas concerts
Christmas is in full swing, bringing a slew of seasonal offerings from major musical institutions. Chamber Choir Ireland under Paul Hillier are at Christ Church Cathedral today (Sunday), with a programme that blends new works by Irish composer Eoghan Desmond with pieces by Byrd, Arvo Pärt and Victoria.

Arias and Christmas songs are on offer from Irish soprano Claudia Boyle and Maltese tenor Joseph Calleja with the RTÉ NSO under Proinnsías Ó Duinn in a celebrity-priced concert at the National Concert Hall on Monday. Also at the NCH, the NSO offers two Christmas lunchtime concerts on Tuesday (with soprano Amy Ní Fhearraigh) and Wednesday (with baritone Simon Morgan). Liz Nolan is the presenter and John Finucane conducts.

Irish tenor Robin Tritschler joins the Irish Chamber Orchestra, directed from the violin by Katherine Hunka, at Monkstown Parish Church on Thursday, when the non-carol offerings include Finzi’s Dies natalis, Elgar’s Serenade for strings and works by Handel. The orchestra repeats the programme in Limerick on Friday.

Patrick Stewart returns to Starfleet: ‘It’s inconceivable to me that I should retire’
4

Dolly Alderton: ‘I was reckless, I took too many risks’
Real news has value SUBSCRIBE