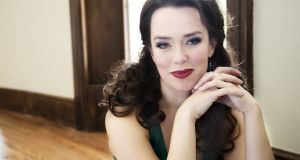 The National Concert Hall’s focus on music by women continues with a song recital by mezzo-soprano Sharon Carty and pianist Úna Hunt. Their focus is on works by Pauline Viardot, Augusta Holmès, Cécile Chaminade, Mélanie Bonis, Hope Temple and Germaine Tailleferre who is best-known as the only woman composer of the group of French composers labelled Les Six after an article by critic Henri Collet in 1920.

It’s 250 years since Beethoven was born, and the year’s first major celebration at the NCH comes from the RTÉ Concert Orchestra. The programme is as pure as you could wish – the first three piano concertos, performed in the order they were written (Nos 2, 1, 3) and directed from the keyboard by Finghin Collins. Barry Douglas’s Camerata Ireland and the RTÉ Symphony Orchestra under Leonard Slatkin will be in on the act before the month is out, on Wednesday 29th and Friday 31st, respectively.

Chamber Choir Ireland starts the year with a midday instalment of its Choral Sketches composer-mentoring programme in the National Concert Hall’s Kevin Barry Recital Room. The choir’s conductor and artistic director, Paul Hillier, is in charge of the first public performances of Sinéad Finegan’s Anthropo Scenic, Anselm McDonnell’s Tearing as it is Woven and Eoin Mulvaney’s Cernunnos, works which were developed under the guidance of composer Tarik O’Regan.