Slipknot at 3Arena, Dublin: Everything you need to know 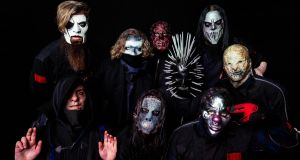 Slipknot: playing in Ireland to promote latest album We Are Not Your Kind

These men in masks have been hiding their faces for 25 years, but similar to the policy Mike Scott applies to The Waterboys, there has been a swiftly revolving door from very early on for membership of Slipknot. The sole remaining original founding member is percussionist Shawn Crahan, a 50-year old musician/film director that has been pivotal to the group’s success for more reasons than you might think.

Thanks to Crahan, Slipknot’s collective image of freakish masked men straight out of a contemporary horror movie – much like a Stephen King novel directed by James Wan – has been as representative as their music. Outside of US rock band Kiss – literally, a graphic influence on Slipknot – they surely remain the only commercially successful band that are identifiable by anyone outside the core fanbase and/or inner circle being able to recognise them. How’s that for a metal-mental puzzle?

The band play Ireland as part of the promotion for their latest album, We Are Not Your Kind, which has been hugely successful. With media coverage from publications you might expect (“bold, fearless and exhilarating as ever” – Kerrang!) to those you might not (“a metal magnum opus” – Forbes), acclaim for Slipknot has been all-inclusive. If you have an urge to purge, you know where to be next Tuesday night.

On Tuesday at 3Arena in Dublin.

Limited tickets are available on Ticketmaster. Concertgoers are advised to buy tickets from accredited sources only.

Doors open at 6.30pm. Support comes from extreme metal act Behemoth. Their lead singer Nergal, a self-confessed Satanist, tore up a Bible on stage, landing him in hot water with the Polish authorities. However, he won his case which went all the way to one of Europe’s highest court. Slipknot at due on stage about 9pm

Parking is available in the Point Village car park (you can book through Ticketmaster for €13.85), but better to leave the car at home and use the Luas – get off at the final stop of the red line, the Point. There are usually extra trams on show nights. The last Luas is scheduled to leave the Point at 12.30am.

What will Slipknot play?

This is their first live show of 2020 but expect a heavy sprinkling of songs from their 2019 album, We Are Not Your Kind. Here’s the set from their final gig of last year, in Quito, Ecuador, on December 6th:

Crahan formed Slipknot in Des Moines, Iowa, in the winter of 1995. He and other original members were established musicians in the city’s heavy metal scene, so they knitted together, initially, at least, as friends. Within a year, their self-released debut album, Mate. Feed. Kill. Repeat. was released. Quite soon, however, band member issues arose, with firing and hiring beginning in earnest in 1998 when they signed a seven-album deal with metal/hard rock label, Roadrunner Records.

Come 1999, the band’s first major label album (self-titled) was unleashed. Initially sales were slow, but a hard slog of accompanying promotional live shows – which featured somewhat cruder but no less effective presentations of what they would eventually morph into – began to gain crucial word-of-mouth following. Roadrunner Records knew they had a hit on their hands when the album was certified platinum.

Since then, there hasn’t really been any decrease in the band’s creative output. Gaps between subsequent albums have been lengthy, with just four albums recorded between 2004 (Vol. 3: The Subliminal Verses) and 2019 (We Are Not Your Kind), but that’s normal enough for such a successful band.

What has enabled their continued success is the music, which is, for the most part, a collage of forcefully down-tuned guitars, thundering percussion, samples, turntables, vocal styles than run the gamut from screaming and growling to discernibly melodic, and lyrics that explore (perhaps unsurprisingly) topics such as nihilism, isolation, psychotic behaviour and misanthropy.

And yet with Slipknot it always comes back to the stage performance. And those masks, which are ridiculous to some and troublesome to others. Crahan was the instigator of these from the outset, and from 1997 all band members have worn a uniquely fashioned one. They have said the wearing of them is a way “to become unconscious of who we are and what we do outside of music.” Yeah. Right. Maybe.

Their live performances are also overtly distinctive, to say the least, and just that little bit more transparent. Over the years, they have toned down interaction with audiences due to lawsuits of the health and safety variety, but it is no cliché to say that (and whoever would have thought that Joe Dolan, the man from Mullingar, would share space with the masked men from Des Moines) there ain’t no show like a Slipknot show.