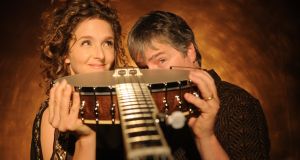 Banjo’s golden couple, Abigail Washburn and Béla Fleck. Their first album together was an instant hit and won them a Grammy for best folk album in 2016. But they admit that, at first, working together on new material was a struggle

The banjo has to be the “Marmite” of musical instruments. For the haters, this odd-looking cross between a drum and guitar is an object of ridicule, an archaic contraption associated with hillbillies and black face minstrels, useful today only as the butt of musician in-jokes. But for those whose ears are attuned to its unique sound, a banjo is a wondrous thing, an instrument with an ancient lineage that has been central to the development of American music, and thereby to much of western folk and popular music.

To the latter group, Abigail Washburn and Béla Fleck are banjo royalty whose marriage in 2009 united not just two of Nashville’s leading performers, but also two distinct approaches to the instrument.

Fleck is generally regarded as the banjo’s finest living exponent, a dazzling virtuoso, playing in the three-finger style of banjo pioneer Earl Scruggs and one who, as a solo performer and with his band the Flecktones, has repeatedly lifted the banjo out of its bluegrass comfort zone. The 61-year-old holds the distinction of being nominated in more Grammy categories than any other instrumentalist, winning an impressive 15 times to date. He was named for Hungarian composer Béla Bartok, so did his parents have delusions of musical grandeur for their son?

“Delusions of banjeur!” Fleck shoots back, quick as a flash. In fact his father disappeared from his life soon after he was born, leaving only the name he gave his son. “You know that Johnny Cash song A Boy Named Sue?” he asks. “I think he named me Béla so that I would learn to fight.”

“It hasn’t worked out” deadpans Fleck.

Banjo’s golden couple are seated side by side, speaking to The Irish Times  from their Nashville home, and they are immediately likeable, warm and down to earth, like musicians not stars, despite the sell-out world tours, the top-selling albums and the shelfloads of awards.

Though some 20 years Fleck’s junior, musically Washburn is the more old school of the pair, a vocalist of rare power and authenticity who has been central in the recent revival of “old time” American folk music, accompanying her soulful voice in the more traditional claw-hammer banjo style. But she too has taken the banjo into new spaces, particularly fusing it with Chinese musical culture. As a young college student, she says she became “obsessed with learning Chinese, because people who speak a different language have a brain that works differently” and had initially planned to train as a lawyer in China. Improbably, it was through her frequent visits to China in the 1990s that her interest in American folk music was kindled.

“But then I heard bluegrass and I was really drawn to the sound of Doc Watson singing and playing his banjo. I heard something really American, something that I could share with my Chinese friends.”

We had our first baby and then started writing songs together and recording an album together and touring together. It was a lot to ask of ourselves – it was dumb

What began as a few folk tunes learned for Chinese karaoke sessions turned suddenly into a career when Washburn was spotted by a Nashville record company back home and, in just a decade, she has become of the most admired performers on the American folk circuit.

So when these two evangelists of the banjo (ebanjolists?) first got together in the mid-2000s, some cynics saw less of a love match and more of a strategic alliance but in fact it took the couple nearly 10 years to get round to recording as a duo. When it finally happened, the album, simply titled Béla Fleck & Abigail Washburn, was an instant hit and won them a Grammy for best folk album in 2016. But they can admit now that, at first, working together on new material was a struggle.

“We had our first baby,” says Washburn, “and then started writing songs together and recording an album together and touring together. It was a lot to ask of ourselves – it was dumb.”

“It was stupid,” agrees Fleck, turning to his wife. “Let’s never do that again.”

They also found that evaluating each other’s ideas in the rehearsal room was emotionally complicated and they readily agree that the follow-up, Echo in the Valley, released in 2017, was a step forward for them as collaborators.

“We’ve come a long way in six years, let’s say that,” says Washburn with a sideways glance at her husband. “When we started writing the songs for Echo in the Valley, we knew each other a lot better. Béla is a new lyricist. I mean,” she adds hastily, “not that I’ve been doing it my whole life but I have been doing it longer and I have a real attachment to my identity as a singer and as a lyricist, so when Béla comes to the table with new ideas for lyrics that I don’t identify with easily, that can be a real friction point.”

So what happens these days when they disagree about where a new song is headed?

“We just say it,” says Washburn. “I think we’ve always been like that, but we might have gotten more compassionate over the years about how we say it.”

“And it’s okay to get upset,” adds Fleck. “If you’re passionate about something, and you’re just trying to avoid conflict all the time, then that’s no good either.”

“Sometimes,” admits Washburn, “if we’ve had a squabble and we sit down to write together, I need to sort of work out that squabble before I can get into the writing. I’ll be like, ‘You know what, you’re just not taking out the trash enough. I’m always taking out the trash. Let’s get through that first. Take out the goddamn trash and then I might like that line!”

“Yeh,” laughs Fleck warming to his partner’s theme. “We could do a lot of quid pro quo, like, ‘If you put the toilet seat down, you can use that lyric on the second verse. Or, ‘If you take out the trash, you can do your crazy banjo solo after the fourth verse, like, on the fade out.’”

In fact, the album is evidence of a very healthy mutual respect, and the co-written tunes, such as the opener, Over the Divide, connect their new material to the tradition of protest songs that characterise the best of the American folk tradition.

“One day I was reading an article on the BBC,” recalls Washburn, “about a man named Hans Breuer who’s a shepherd in the Austrian mountains. He was going over the border in the middle of the night in his minivan to pick up Syrian refugees and find places of refuge for them and we thought, here was an example of someone who knew what to do in complicated times.”

Fleck nods but he is wary of being seen as overtly political. “I have always felt it was an unfair advantage for someone who happens to be a performer to be able to speak their mind to a room full of people that wouldn’t pay any attention to them if they weren’t a musician,” he says, “and I’ve always felt that I didn’t want to be that person. But this time it was just pretty hard not to speak up at what we saw going on around us. That would be like a wilful act of ignoring what’s happening. So we felt like it was good time to be writing an album where we could actually find a place to put some of the anger that we had into the record.”

But if there is anger and passion in the music, there is also a great deal of warmth and as they prepare to go out on the road together again – they play the Perspectives series at the National Concert Hall tomorrow night – the first couple of the banjo are looking forward to some alone time.

“On one of these duo tours recently,” says Fleck with a smile, “it occurred to us that the most time we were getting together, actually face to face, was on stage. That was our intimate time, was in front of a thousand people!”

‘I have always believed that in our capitalist, consumerist society, we devour each other’
6