What binds these artists ogether is that they’re very good at what they do, so check them out 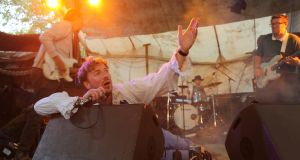 Choosing Irish music acts for imminent success – be that mainstream, semi-crossover, broad cultdom, or whatever else it might mean to the artist (which we believe is simply having the good fortune to continue being able to make music) – is a thankless task. It’s exactly that because to the 10 acts listed here you could easily add another 30. The reasons for inclusion, however, are rather more basic and don’t hinge on anything other than that we like what we hear, and we reckon all of the artists/bands are poised for wider awareness.

Some are new-ish, some have been around for a while but are now presenting themselves in a fresher light, and some have only just popped their heads over the parapet in the past year. All music styles are represented – from electronica to hip-hop, from pop to noise, from old-fashioned songwriters to new-fangled vibe merchants. What binds them all together is that they’re extremely good at what they do – so check them out, see their gigs, buy their merch and music.

In short, by making sure they continue, you can make it less likely that they’ll give up. Do the right thing.

Classically trained Co Clare electronica musician Paddy Mulcahy has been dividing his time between making a living (creating music for global commercial advertisements for the likes of Belstaff and Deliveroo) and making somewhat more personal art, which includes this year’s album How to Disappear. Mulcahy’s recent performances at Other Voices established him as one of Ireland’s most gifted ambient/electronic composers, who can deliver music that is not only delicate but also forceful. Mulcahy plays Dublin’s Unitarian Church on March 28th.

It isn’t very often that the same band members (or most of them) get two bites of the cherry, but Soda Blonde look set to achieve exactly that. Featuring four former members of Little Green Cars, which very surprisingly split up in the first quarter of 2019, Soda Blonde isn’t so much a back-to-square-one scenario as a crucially enhanced tweak to material written when the musicians were likely in the throes of an intra-band crisis. Either way, the new music is – as usual with this bunch – a cut above the rest.

Waterford drummer/producer Alex Gough has been a figure on the Irish scene for more than a year, but the past 12 months in particular have brought him significant recognition for his tracks Breakfast and Step to Me. Now playing gigs with a dynamic and sinuous band that instinctively fuse jazz with hip-hop, Gough delivers on every front. New music will be cleared for take-off in 2020 – as will, all too inevitably, Gough himself.

From the get-go, this Dublin trio have stood out as being ones to watch and listen to. Their sound pivots on the dynamic of noise rock (thanks to the presence of Girl Band co-founder/guitarist Alan Duggan) having it out with soft vocals (Kate Brady, somewhat inspired by R&B and jazz). The results are, even at this juncture, embryonic if not incongruous, with Duggan’s juggernaut noise-pop precariously balanced with Brady’s voice. Such conflicts, of course, only add to the pleasures. With Girl Band now back on course, however, it remains to be seen just how much progress The Claque will make in 2020. A debut album won’t be released anytime too soon, alas. “The short-term goal,” band member Paddy Ormond told Irish music blog goldenplec.com several months ago, “is just to play some decent shows, build up an organic following . . . and hit the ground running in 2020.”

Call us old-fashioned if you like, but now and again there’s nothing wrong with a song that starts, has a middle, and then ends. If there are decent lyrics somewhere in there, then all the better. A Smyth has released five single tracks in the past 18 months, and across that period of time has honed his sound to reflect what some might consider conservative but which we far prefer to describe as classic. In other words, if you’re looking for that roughed-up singer-songwriter mix of Springsteen and Wilco, then here you are. A debut album is scheduled for release early this year.

Sneaking into public awareness over the past year via a few singles (Out of Reasons, Talk it Through, Someone Else), Jackie Beverly is tuned into 1980s pop music with an insistent Noughties indietronica take to it. Previously tethered to folk music, latterly Beverly has introduced synth/laptop-driven rhythms to her music; from what we have heard, the results are moody, unpretentious, captivating and a little bit special. Expect further releases from Beverly throughout 2020 – you’ll have a chance to see what all the fuss is about when she headlines Whelan’s Upstairs, Dublin, on March 21st.

Passing Murphy’s Ice Cream shop in Dingle a few weeks ago, we heard a snippet of a quiet song that firmly held the attention of the cramped space. Elbowing our way in, we heard Seba Safe (aka Dublin-based songwriter Michael D’Alton) deliver songs that were written, Bon Iver-like, in a cabin in the Wicklow mountains. What has emerged is a range of tunes that have melodies at their heart as well as a deeply felt expressiveness that is clearly based on personal experience. Hints of indie-folk and R&B emerge, but there is also a singular identity at play here. D’Alton released the Maprunner EP some months ago and is presently preparing new material to be released in February.

More attuned ears will know of Aoife Nessa Frances from the Irish indie band Princess, which released a series of tracks (Black Window, Molly, Neverlook) five years ago. Latterly, however, she has dug into the undergrowth of ambient pop and dreamy, semi-orchestral psych-folk. The closest intersectional reference point we can think of is Pentangle with Nico and Jane Weaver as co-vocalists, so if that floats your boat (as it does ours) then there is much to look forward to from this most individualistic of songwriters. The good news is that we won’t have to wait too long for new material, as her debut album, Land of No Junction, is released January 17th.

Neal Keating had a year and a half packed into 2019, with his music being so well received that 2020 looks set to be even more of a breakthrough. A former hardcore punk singer, he was propelled by circumstances into highly chilled hip-hop music as visited through Blue Note and other jazz avenues. What has so far emerged is less frenetic than current Irish contemporaries Mango x Mathman, Tebi Rex, Jafaris and others, but is just as occupied with socio-political and community-focused concerns. Following a few very impressive track releases in 2019, a debut album is being prepped for release later this year.

New band, old hands? Autre Monde includes musicians such as Paddy Hanna, Padraig Cooney, Eoghan O’Brien and Mark Chester, all of whom have spent time in various bands from the Popical Island collective (such as Ginnels, Skelocrats and No Monster Club). While Hanna also pursues with some success a solo career, however, he and the other members create equally dark-topic yet immensely enjoyable music, examples of which can be found on their forthcoming debut album, The Imaginary Museum. Other good news is that their track, Fever in May, was picked up for use in Audi Ireland’s Q8 ad campaign. Vroom, vroom!