Get Bach in Kilkenny and The Hunger in Dublin 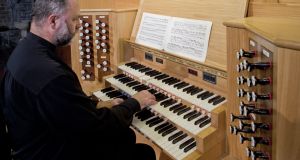 Malcolm Proud will give an organ recital at St Canice’s Cathedral, Kilkenny, on Saturday, August 17th.

Kilkenny Arts Festival kilkennyarts.ie There are two appealing concerts in the closing days of Kilkenny Arts Festival. Saturday morning’s 11am organ recital at St Canice’s Cathedral by Malcolm Proud is an all-Bach affair. And on Sunday afternoon, from 2pm to 5pm, the intimate space of Kilkenny Castle’s Parade Tower will host the Quiet Music Ensemble’s Deep Listening Sunday, an undertaking that’s about as far away from Bach as you could possibly imagine.

The Hunger Abbey Theatre, abbeytheatre.ie Donnacha Dennehy’s opera The Hunger gets its Irish premiere at the Abbey Theatre in a run that extends from Monday until Saturday. The subject is the Great Famine and the work is based on first-hand accounts by Asenath Nicholson. She was an American philanthropist who first visited Ireland in 1844 to investigate the condition of the poor, and came here again during the famine; the opera also includes the perspectives of 21st-century commentators.

The director is Tom Creed, who also directed the work’s première at the BAM Next Wave Festival in Brooklyn in 2016. There are just two singers, soprano Katherine Manley and sean-nós singer Iarla Ó Lionáird, and Crash Ensemble is conducted by Alan Pierson. The 2016 version was called a docu-opera, though the composer’s website now calls the “fully revised” 2019 version a “staged docu-cantata”.