The 25 festivals and music events of the summer

It’s summertime, which means it’s time to hit the fields, parks, GAA stadiums and forests for a blast of live music. Here’s our guide to the 25 festivals and music events you have to see this year 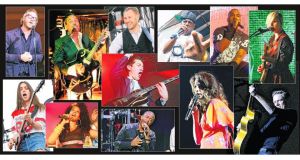 Between now and September, a weekend will not pass without a festival or big music show of some stripe or other to tempt you with its wares. The big ones, the small ones, the artsy ones, the hipster ones, the community ones and the ones with the cowboys: the choice is yours. Here are the 25 events and festivals we’re giving the thumbs-up to this summer. (Click here to read Jim carroll's intro to the summer)

Now in its third year, it takes its title from the colourful anti-jazz movement of the 1930s, which held sway in certain parts of rural Ireland, and has a bit of crack with it. A fine gathering of Irish jazz and blues performers, acts not to miss this year include DFF (composer Dave Flynn’s anything-goes collective) and the outrageously talented Ensemble Ériu (above).

LIVE AT THE MARQUEE

One of the real stars of the Irish festival scene in recent times, Body & Soul has got things right, with both acts and ambience. Performers to pull the cognoscenti to the midlands next month include John Grant (above), Caribou, Jon Hopkins, Of Montreal, Mount Kimbie and Jessy Lanza.

You know that after these shows YouTube will be cluttered with shaky videos of the band doing A Day Like This. Aside from the classics, you can expect Guy Garvey and his seasoned mob to feature tunes from current album, The Take Off and Landing Of Everything.

Sea, surf and sounds are the Donegal festival’s big calling-cards, and they’ve gained the trust of a sizeable community of music fans over the past few years. We’d happily surf to the northwest to see Kelis (above), Lonnie Liston Smith, Ella Eyre, Flight Facilities, Drenge and Erol Alkan. You can also check out what The Strypes are like two years after their breakthrough.

WESTPORT FESTIVAL OF MUSIC AND FOOD

As you’d expect from a festival with both music and food in the title, as many chefs as drummers feature on the line-up. On the music side: David Gray, Kool & The Gang, Bryan Adams, Little Green Cars, Tinariwen, Bell X1, Daithi, Sophie Ellis-Bextor and the Kilfenora Céilí Band. And in food: Darina Allen, Ross Lewis, Neven Maguire, Rachel Allen and Clodagh McKenna.

They’ll be plugging last year’s ambitious Reflektor album, but those still going on about seeing them at Electric Picnic in 2005 can relax, as the more seasoned classics should also surely feature.

Another band who enjoy a strong affinity with Irish audiences, The National’s four Irish summer shows are proof that the long game works. It might have taken them five albums to become overnight sensations, but they’ve resolutely stuck to their guns rather than going for the quick fix.

Having arrived on the scene last year, Groove showed that there’s always room for another event, especially one just on the outskirts of the capital. Acts this time around include David Gray, Paloma Faith (above), James, Cathy Davey, Paul Heaton & Jacqui Abbott and Big September.

Last year’s AM album showed that no one comes close to the Arctic Monkeys in delivering sleek, tough, audience-friendly arena rock. It helps, too, that Alex Turner appears to have borrowed a lot of his onstage tics and mannerisms from fellow Sheffield man Richard Hawley. The only rock band you need to see this summer.

You probably didn’t get an invite to the wedding either but you are invited to (buy a ticket for) Marlay Park. It’s Ye’s biggest show to date in Ireland, but he has stellar company in Pharrell “Happy” Williams to help shift tickets. Support from ORB.

Last year, the sun shone for Longitude’s debut and all raved about what was the line-up of the summer. Things are a little more muted this time around, although we’re looking forward to Massive Attack, Disclosure, Haim (above), Rudimental and James Vincent McMorrow.

As we’ll see with today’s election results, 400,000 people can be wrong, but rather you than me when it comes to arguing with these country music fans. It’s a mind-boggling piece of business and, yes, we’re concentrating on the business so we don’t have to write about the music. Or the hats.

One of the best little festivals in the land, Knockanstockan makes great use of a fantastic festival site overlooking the lakes and a really strong community vibe. Acts confirmed for 2014’s outing include Booka Brass Band, The Eskies (above), I Draw Slow, The Hot Sprockets and Tandem Felix.

Billed as a “a little festival in the countryside”, the Mountain Dew festival draws a crowd of curious music-seekers to the O’Herlihy family’s back gardenin Cork. Acts on the bill for this year’s event include the excellent Talos, Slow Skies, Farewell JR (above), Conor Walsh, Oliver Cole and many more.

One of the country’s finest small festivals in the land continues to draw a crowd of happy punters because of great attention to detail. from tip to toe. This year’s music-makers include Gruff Rhys (above), We Cut Corners, Summer Camp, We Were Evergreen, Dan Croll and some sterling DJs in the form of Gilles Peterson, Andy Weatherall and Norman Jay.

The Firmly established, this one Indiependence pulls ’em in with a strong booking policy of prime local and international names. Fans of White Lies, Tom Odell, Hozier (above), Delorentos, Dan Croll, The Minutes, Fun Lovin’ Criminals and Damien Dempsey will want to check this one out..

Custom House Square, Belfast, August 15th-22nd belsonic.com
Belsonic has long been the smart choice for those looking for a cool city fest with a decent line-up. Highlights this year should include Example (August 15th), Queens of the Stone Age (20th) and Imagine Dragons (22th).

Bookended with The Killers and Bastille (above) on August 21st and David Guetta with Steve Angello confirmed for August on the 24th, Vital is setting out its stall with verve for this city festival. Those who fancymight enjoysome of the sponsor’s products in a camping environment may not be thrilled, but those who like to get a night’s kip in their own bed will give Vital the thumbs up.

A festival growing in reputation withevery passing year, Sunflowerfest comes to the table with a lotis about more than just music. Those looking for fFamily-friendly attractions include storytelling, poetry and art, dance and music workshopsshould walk this way. Forhe music fans, the line-up includes The Barley Mob, Chelsea Chambers, King Kong Company, The Hot Sprockets (above) and Scorpion Jack.

The big daddy of them all. The Picnic turns 10 this year – as in, it’s 10 years since the first one as opposed to last year’s fake 10th birthday – and is set for this next decade with Festival Republic firmly in charge of things. You know what’s involved at this stage so let’s hope for season-defining sets from Portishead, OutKast (above), Beck, Pet Shop Boys, Kelis, St Vincent and the hundreds of others heading for Stradbally.

SPIRIT OF FOLK
Dunderry, Co Meath, September 19th-21st
The festival took last year off, but returns for 2014 with a two-day wham-bam of music and other activities. Acts yet to be announced, but you can expect such side attractions as storytelling, battle re-enactments, tours to local historic sites, holistic therapies and child-friendly entertainment. spiritoffolk.com