Be a-frayed: Slipknot are back to head this week’s rock and pop highlights 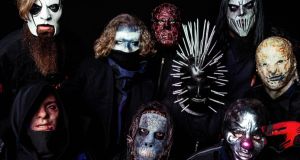 The early months of the year are always good for checking out artists who are either emerging sleepy-eyed from recording studios or aiming to gain the first glimpses of a growing fanbase. Dublin-based singer-songwriter Amy Naessens is one such, a BIMM alumnus who fuses soul, R&B, folk and pop into a wholly appealing mixture that is bound to catch on. This gig sees her launch her new single, To Be the One You Choose. TCL

Back for its 15th edition, this Belfast festival brings together music, comedy, literature, visual arts and rich conversation. There’s something on every afternoon and evening of the eight-day festival, which takes place across the city in different venues, from record stores to sports clubs. Some highlights include Where the Wild Cooks Go with Cerys Matthews, a celebration of food and music, a DJ set with The Charlatans’ Tim Burgess in the Ulster Sports Club and DJ Yoda’s Quentin Tarantino-centric AV show. LB

As part of the First Fortnight festival, which has numerous events on across the country, the music and spoken word Therapy Sessions event returns to Cork with artist Stephen James Smith acting as MC. On the line-up for the night, they have called in the talents of the four-piece Mongoose, the Polish poet Bohdan Piasecki, singer-songwriter John Spillane, the West Cork singer-songwriter Matilda O’Mahony, Clonakilty singer Eve Clague and the poet James Crickard who also performs poetry in drag as Venus Envy. LB

For a whopper night of fundraising and fast, euphoric songs, Big Trans Beats has a serious line-up of DJs to raise money for the Small Trans Library, which provides support to those seeking medical hormone treatment. On the bill they have Roo Honeychild (Club Comfort), Syn (CXNT/Gash Collective), Fiveseven (Grace Club) and Capricorn (CXNT). Location information will be sent to ticket holders, but it’s important that people attending know that while the event runs until 3am, doors open at 9.30pm and close at 11pm. LB

Those of you who have been attending various events during the Dublin Bowie Festival (which ends today) will possibly want to wind down with this “listening party” and panel discussion. Before and after Bowie’s acclaimed final album is played in its entirety (a high-grade vinyl copy on a suitably expensive sound system), there will be an in-depth panel discussion delving into the album’s songs, lyrics, themes, album cover design, recording and production. Starts at 5pm. TCL

The men in masks have been around for about 25 years, and although over that time period there is but one remaining original co-founding member in Slipknot’s ranks (Shawn Crahan), they have managed to become one of the most consistently successful metal bands. Renowned for their stage presentations, the band play Ireland as part of the promotion for their latest album, We Are Not Your Kind, which has been hugely successful. From “a metal magnum opus” (Forbes) to “bold, fearless and exhilarating as ever” (Kerrang!), acclaim has been wide-reaching. Expect the fans to go metal-mental. TCL

If the Christmas season hasn’t killed your spirit and you still fancy some midweek gargling and dancing, you can always hit up the old reliable of the weekly Silent Disco in the Róisín. With Gugai and Ted in charge, you have two channels to choose from and the reaction you give for each song choice may surprise you. Slow dancing to Jeff Buckley? Sure. Remembering every millisecond of Avril Lavigne’s Complicated? Of course. It’s €6 in at the door and that also gets you a free shot of Jagermeister. LB

Now that they are all well again, Snow Patrol honour their postponed December gig at this venue with a rescheduled date. In a fully seated show that references their recent album of acoustic reworkings of their best-known songs (Reworked), you can expect subtly performed tracks from their best-selling albums Final Straw (2003), Eyes Open (2006), A Hundred Million Stars (2008), Fallen Empires (2011) and Wildness (2018). Whether the new revisions of older material will point a way forward for the band remains to be heard, but we always admire musicians that recalibrate and revise, so fair play etc. TCL

ONES TO WATCH
Whelan’s, Dublin; runs to Sunday 19

There are a few major showcase festivals in Ireland, multi-day events that present a wide range of moderately established Irish acts – acts whose names you just about recognise, and acts you have little or no idea about. While the Music Trail during December’s Other Voices is a showcase within a festival, Ones to Watch (and not forgetting Ireland Music Week, which takes place in October) is a standalone display of what we can expect to be hearing on selected radio stations and seeing at selected festivals over the next year. The full list of acts performing across several stages throughout the venue has yet to be announced, but we’d keep eyes and ears out for Turnstiles, Grey Face, Paddy Mulcahy, JaXson, and Skinner. TCL

A CELEBRATION OF ARTHUR RUSSELL with PETER BRODERICK
The Big Romance, Dublin

Leading the charge as host for the night, Efterklang’s Peter Broderick will steer the celebrations of the American composer and disco icon Arthur Russell, who died in 1992 at the age of 40. It kicks off with some storytelling that centres around the influence Russell had on modern music, followed by a DJ set that focuses on the recently released Iowa Dream, which features studio demos, unreleased recordings and previously lost songs. LB

Following the tragic death in 2018 of Scott Hutchinson, the main songwriter of Scottish group Frightened Rabbit, the Tiny Changes Foundation was established by his family. The Scottish-based charity is involved with highlighting mental health issues, and to further this aim Irish promoters Strange Brew and Labyrinth have devised a distinctive revisiting of Frightened Rabbit songs by several Irish acts. The musicians will select three tracks each from the band’s back catalogue (including rarities) and perform them in all their reflective glory. All proceeds go to mental health charity First Fortnight and the Tiny Changes Foundation. TCL

UK singer and songwriter Josienne Clarke presents her first solo shows in Ireland (she was previously here as a duo with her former creative partner Ben Walker) with specific emphasis on last year’s debut solo album, In All Weather. Reviewed in this paper last November (“an intriguing listen, but an often uncomfortable one, too”), the album further established her as a lyricist of fortitude and a songwriter that isn’t in any way concerned about blending folk (ala Sandy Denny) with pop (ala The Sundays). Only two provincial shows, though? Say it ain’t so. TCL

Old-school soul singers aren’t as ten a penny as they used to be. He may not be the last one standing, but – noting the departure of Sharon Jones and Charles Bradley in recent years –  Elmer Lee Fields is surely representative of a breed of musician and vocalist that we will see less of as the next five or so years progress. This is all the more reason to savour what Fields can deliver. He recorded his debut single in 1969, subsequently going on to work with celebrated blues, soul and R&B singers such as Little Milton, Betty Wright, Clarence Carter and Bobby Womack. He is still recording good music, too, as proven by last year’s album It Rains Love, which this paper described as “Southern R&B music that sounds as if it was boosted from the archives of Stax Records”. TCL

US singer-songwriter Tyler Childers spent his teenage years in Paintsville, Kentucky, coincidentally the same area where country singers Loretta Lynn and Chris Stapleton come from. Odd-jobbing while pursuing a career in music, Childers released his breakthrough (and second) album, Purgatory, in 2017, and hasn’t looked back since. The following year, he won the Emerging Artist of the Year gong at the Americana Music Honors & Awards event, while last year’s album, Country Squire, easily consolidated his position as (so notes Pitchfork) “one of a wave of excellent country artists coming out of the hollers of Kentucky”. A true-blue country singer/songwriter, then, with authenticity seeping out of his skin. Special guests are US old-time duo The Local Honeys. Unsurprisingly, the show is sold out. TCL

The Lumo trio brought in 2020 in style in the newly renovated pub The Circular in Dublin 8 and now they’re ready to show the new decade what they’re all about. Channelling the good vibes of a house party, they play tunes for groups of friends who like to get silly. From Phil Collins to Caribou, The Knife to Paul McCartney, Simon Roche, Nialler9 and Gav Elsted keep you on your toes with their music choice while keeping you on the dancefloor. LB