Gerry and the Pacemakers frontman died following a short illness 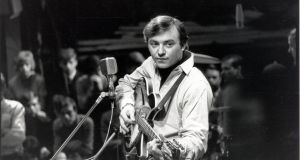 Gerry Marsden, who has die aged 78, performing with Gerry and the Pacemakers in Bremen, Germany in 1964. Photograph: Gunter Zint/K & K Ulf Kruger OHG/Redferns

Gerry and the Pacemakers star Gerry Marsden, singer of You’ll Never Walk Alone, has died at the age of 78.

The lead singer of the sixties band, who found fame in the Merseybeat scene, died after a short illness.

His friend, broadcaster Pete Price, wrote on Instagram: “It’s with a very heavy heart, after speaking to the family, that I have to tell you the legendary Gerry Marsden MBE . . .has sadly passed away.

“I’m sending all the love in the world to Pauline and his family. You’ll Never Walk Alone.”

He said Marsden suffered “a short illness which was an infection in his heart”.

You’ll Never Walk Alone enjoyed a resurgence during the pandemic after a cover of the song, featuring Captain Sir Tom Moore, reached number one in the UK singles chart.

In April this year, Marsden recorded a new version of the band’s hit alongside a music video, which featured Marsden and a number of messages about the NHS.

Gerry and the Pacemakers enjoyed sell-out tours around the world.

In 1962, Beatles manager Brian Epstein signed up the band and their first three releases reached number one in 1963 – How Do You Do It, I Like It and You’ll Never Walk Alone.

The group split in 1967 and Marsden pursued a solo career before the band reformed in 1974 to tour the world – a tour they later repeated.

Frankie Goes To Hollywood singer Holly Johnson, who is from Liverpool and covered Marsden’s song Ferry Across The Mersey, was among those paying tribute.

“So sorry to hear about the passing of Gerry Marsden,” he wrote on Twitter.

“What a Liverpool Legend. So glad I met him. #ferryacrossthemersey #youllneverwalkalone”

And Liverpool FC tweeted: “It is with such great sadness that we hear of Gerry Marsden’s passing.

“Gerry’s words will live on forever with us. You’ll Never Walk Alone.”

Marsden was awarded an MBE for his charity work in 2003.

He married wife Pauline in 1965 and the couple had two daughters. – PA