Rapper and producer known for multiple projects including Madvillain died in October, according to announcement by wife 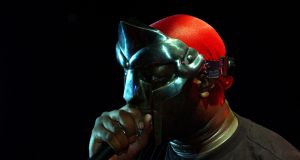 Daniel Dumile, the London-born masked rapper who performed as MF Doom and built a lasting underground fan base with his offbeat wordplay and comic-book persona, died on October 31st, a statement from his family said on Thursday. He was 49. Dumile’s wife, Jasmine, wrote on his Instagram account:

“The greatest husband, father, teacher, student, business partner, lover and friend I could ever ask for. Thank you for all the things you have shown, taught and given to me, our children and our family. Thank you for teaching me how to forgive beings and give another chance, not to be so quick to judge and write off. Thank you for showing how not to be afraid to love and be the best person I could ever be. My world will never be the same without you. Words will never express what you and Malachi mean to me, I love both and adore you always. May THE ALL continue to bless you, our family and the planet.”

No details on a cause of death or why the information was being shared two months later were provided.

Over six solo albums released between 1999 and 2009 and five collaborative LPs (with Madlib and Danger Mouse, among others) between 2004 and 2018, Dumile honed a style that was intricate and imaginative, calling on both esoteric and lowbrow references as well as cartoonish imagery in lyrics that could be poignantly emotional.

Born in London and raised on Long Island, Dumile grew up steeped in early hip-hop influences. He debuted in 1989 on the 3rd Bass track The Gas Face with a standout cameo that helped him get a record deal for his own group, KMD, in which he rapped as Zev Love X. The act included his brother, Dingilizwe, who performed under the name DJ Subroc, and its first album, Mr. Hood, arrived in 1991 on the major label Elektra.

During the recording of KMD’s second album, Black Bastards, Subroc was killed in a car accident, and the label later declined to release the record. Dumile went underground, vanishing from the entertainment business, but continuing to work on music privately while he raised his son.

He resurfaced in 1997 with the single Dead Bent, his first song under the name Metal Face Doom. (The persona was a nod to the Marvel villain Doctor Doom.) Around the time of the release of the album Operation: Doomsday in 1999, which featured a masked character on its cover, he began hiding his face in public, at first with a stocking mask, and later with the metal one that became his signature.

In a 2009 interview in The New Yorker, Dumile said the mask became necessary as he made the leap from the studio to the stage. “I wanted to get onstage and orate, without people thinking about the normal things people think about,” he said. “A visual always brings a first impression. But if there’s going to be a first impression I might as well use it to control the story. So why not do something like throw a mask on?”

Once an underground cult figure, Dumile’s albums in the mid-aughts launched him to greater fame. Madvillainy, which arrived in 2004 with the producer Madlib, was a breakthrough. “He delivers long, free-associative verses full of sideways leaps and unexpected twists,” pop music critic Kelefa Sanneh wrote in The New York Times, reviewing a 2004 concert. “You think you know where he’s heading and what each sentence will mean when it ends. Then it bends.”

Released in the same year, his album MM .. FOOD (an anagram of his stage name) included tracks like Gumbo, Kon Queso and Kon Karne. In rapping about the seemingly mundane topic of food with goofiness and wit, Dumile told Spin in 2004 that he was “showing respect for human life”.

“I’m more like a writer dude rather than a freestyler,” Dumile told the Chicago Tribune that same year. “I like to design my stuff, and I consider myself an author.”

Dumile rapped under different personas, and later became known for sending impostors out onstage to perform for fans; in his trademark metal mask, it was difficult to know the difference. The body doubles often disappointed fans but sparked viral moments online, like when an apparent MF Doom drop-in at a concert turned out to be comedian Hannibal Buress.

Though he never reached mainstream superstardom, Dumile was widely admired by fellow rappers and producers, in addition to a loyal following of fans. He was “your favourite MC’s MC,” wrote Q-Tip from A Tribe Called Quest on Twitter. In a post on Instagram, El-P wrote, “thank you for keeping it weird and raw always. you inspired us all and always will.”

In 2017, Dumile announced on social media that his son, King Malachi Ezekiel Dumile, had died at 14. – New York Times