Bob Dylan in Kilkenny: No guitar, no talking to the audience – and don’t pull out your camera

Dylan sticks to his setlist and takes no requests. Neil Young is more likely to improvise 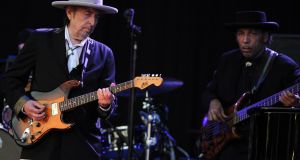 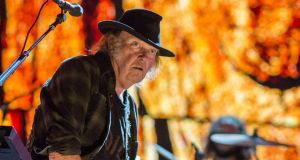 Once upon a time every Bob Dylan concert was as wildly unpredictable as the next.

The 1965 Newport Folk Festival, when Dylan swapped his acoustic guitar for a Fender Stratocaster and played electric for the first time. The Manchester free Trade Hall a year later, when a member of the audience yelled “Judas”, before Dylan turned around to his band and shouted: “Play f***ing loud!”

The 1969 Isle of Wight Festival, when Dylan reappeared from the proverbial nowhere, dressed all in white and singing with a new country music voice.

The Rolling Thunder Revue, in 1975, cunningly revisited in the recent Martin Scorsese documentary on Netflix, and when Dylan himself wasn’t sure who he was on stage each night. The 1979 shows at The Warfield in San Francisco, when he defied the entire audience and played nothing only his new gospel numbers.

I could go on, but things have changed, and Dylan will be a lot more predictable when he co-headlines with Neil Young at Nowlan Park in Kilkenny on Sunday. That’s not saying there won’t be some surprises – especially for anyone who hasn’t seen either of them play live for a while.

Dylan is playing mostly behind his piano, under a cowboy hat, dressed all in black (or white), his four-piece backing band gently following his lead

In my now 24 years of seeing Dylan live, beginning at the old Point Depot in 1995, he’s played in Ireland another 17 times since, and I’ve been at them all (though who’s counting?). Two years ago at the 3Arena, he was mostly playing the crooner: centre stage, leaning over the microphone, one hand on his left hip, dropping in old covers such as Why Try To Change Me Now, All or Nothing At All, and Autumn Leaves.

On this tour – Kilkenny his 38th and last European date since March– Dylan is playing mostly behind his piano, under a cowboy hat, dressed all in black (or white), his four-piece backing band gently following his lead. There are no covers and most of the setlist should be familiar – Like A Rolling Stone, Blowin’ In The Wind, Highway 61 Revisited, It Ain’t Me, Babe – once his often befuddling re-worked delivery of them becomes recognisable. They’re slower, almost staccato style, and don’t expect any crowd harmonies.

Expect three songs off his 1997 classic Time Out Of Mind, and there will also be the more obscure, When I Paint My Masterpiece not on any of his official 38 studio albums. He stands centre stage for I Can’t Wait, and that is worth waiting for.

There will be no engagement with the audience, he won’t touch his guitar, and don’t chance pulling out your camera phone: in Vienna, on April 16th, Dylan spotted one pointed right at him, stopped the show, asked “we gonna play, or we gonna pose?” and very nearly fell over a sound monitor, before eventually playing out the encore.

He mixed up the setlist in Stuttgart on Wednesday, dropping his regular opener Things Have Changed for Balled Of A Thin Man. “Something is happening here, and you don’t know what it is...” says the chorus line, and some people do get that feeling with a Dylan show these days.

Truth is the show is more suited to the intimate indoor venue, such as the Beacon Theatre in New York, where I saw the last of his six-night residency last November, and can still hear the echoes of It Takes A Lot To Laugh, It Takes A Train To Cry, his parting song. If you listen carefully there will be some tender moments, especially on Simple Twist of Fate, and Girl From the North Country, sounding as heartfelt now as when he wrote it in 1963.

Dylan recently crossed the 3,000 show mark since 1988, and in most of those Dylan has never tried to please anyone but himself, and not everyone appreciates that. He sticks to his setlist, definitely won’t be taking requests, only his harmonica solos sounding in any way improvised

This is only the second time Dylan and Young have co-headlined – the first being in London’s Hyde Park on Friday. They’ve shared the same stage before, including Dylan’s 30th Anniversary Celebration in 1992, but they’ll be sharing something else here, two performing artists in the twilight of their careers, playing strictly on their own terms, not so much mainlining the nostalgia as trying to avoid it. Dylan is now 78, and Young 73, and with 151 years between them, they’ve nothing left to prove, and least of all to themselves.

They haven’t actually performed a song together since October 20th, 1994, when Dylan played the Roseland Ballroom in New York, and Young and Bruce Springsteen came out at the end for Rainy Day Women #12 & 35 and Highway 61 Revisited. They have been friends since the 1970s, and Dylan isn’t entirely averse to stage additions (he brought on Bono and Van Morrison when he played Slane Caste, 35 years ago this month).

Fans of Young can expect a little more improvisation, partly because his backing band, Promise of the Real, are all less than half his age, fronted by lead vocalist and guitarist Lukas Nelson, son of Willie. They appear to have re-energised Young again on this eight-date European tour, given him some fresh longing for his past, while still sharing his love of long winding guitar solos that were standard when he played the RDS in 2013 with Crazy Horse.

Last Tuesday night in Antwerp, Young fairly stunned the crowd by playing On The Beach – a song he hasn’t played in full-band electric form since his 1974 tour with Crosby, Stills, Nash & Young. At his two shows in Germany last weekend, he unearthed several other rarities, including a solo The Needle And The Damage Done, a debut of Harvest Moon, plus a pairing of Hey Hey, My My (Into The Black) and Rockin’ In The Free World.

They’re not expected to share the stage together. If by chance they do, it definitely won’t be to sing The Hurricane. Young, however, will sing Like A Hurricane. Nothing wildly unpredictable about that.