Phil Kieran: ‘I still believe in the album format. It means something’

Crafting his new album, Life Cycling, was a rewarding labour of love for the Belfast DJ 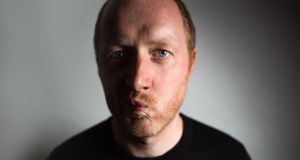 Phil Kieran: ‘When electronic music first came along, people were horrified that it wasn’t even music. It’s still strange to me how you can make machines and circuitry feel so human’

“I still believe in the album format,” says Phil Kieran, when I ask why he’s bringing out a long player rather than the more currently typical EP or collection of singles. “I still believe it has something to say, and to do. It might not be a career move, I’d love it to be successful and make loads of money, but as an artist I have to follow my gut and I believe in creating albums. Singles are fun, but they’re almost an easy option. I get bored, I like a challenge.”

Having released nearly 70 records of varying lengths, as well as three full-length albums, Kieran can’t be accused of avoiding challenges. A Belfast native, he has been a dance music institution in Ireland – north and south – and dancefloors further afield, for two decades. Life Cycling, his new album on Irish label Maeve, was still a job of work.

“I spent so much time on it,” he says. “Right up until the time it was getting mastered, I was making changes. It went from being an eight-track album to being a 15-track album within a year.”

I ask if he has a dark George Lucas urge within himself to fiddle with and change the tracks even now that they’re finished after all that time.

“A couple of tracks went from being a four-, five-minute track and then I remixed them into something else,” he says. “Remember the early ’90s thing, the DJ edit? Spreading things out so it’s not condensed. You get this breathing space, a different kind of listening experience. Things moved around, became different versions and I’m happy with where it got to. Although obviously, you’re never really fully happy, but at some point you have to let go. I like a deadline because otherwise I’ll just keep changing my mind.”

Life Cycling definitely has breathing space. It’s a thinky, meditative album, filled with lush instrumentation and melodies plumbed from oceanic depths. It’s a thoughtful record, harking back perhaps to arty synth types like Vangelis and Tangerine Dream, combined perhaps with the computerised exotica of Other People Place, or Future Sound of London. It is, in short, the sort of record that was once commonplace in dance music: an album that’s actually an album, rather than a collection of disparate tracks.

I was going for something with optimism and hope, something that connects you with your past

“I think it’s a better career move to just do singles that everyone plays in clubs,” he says, when I ask if this was intentional. “But for me, in the last 10 years, it’s just been about trying to create a thing that means something. Having made records for so long, when a bit of time passes you start to notice the ones that mean something and the ones that don’t. And it’s only those ones that that do which really matter. I found myself releasing less and less. What I want to do is create a go-to place, where each record makes me feel like ‘this’, it brings you into its own world. Whereas sometimes I think people just make 12 tracks and call it an album. Personally, I like an album that takes you to a single place, like Steve Reich’s Music For 18 Musicians. That record is a place, and one I like staying in for an hour. When I put it on it makes me feel a certain way.”

If Life Cycling is a place, then, where would we find it on the map?

“It’s hard to explain,” he laughs, perhaps worried he’s boxed himself into a corner with his last metaphor. “It’s slower, deeper maybe. Making it, I had in mind that it would be positive, energetic, deep. Pleasurable and simple, but with complexity beneath. Even happy music, I find, can seem melancholic when you listen back, but I was going for something with optimism and hope, something that connects you with your past. Whatever that means! I don’t know how to describe it.

“I did a record called Carrousel in 2013 and that was more about my feelings. Life Cycling is more about creating a space for people to put their feelings into. An organic, warm place filled with machines and humanity and those worlds coming together. When electronic music first came along, people were horrified that it wasn’t even music. It’s still strange to me how you can make machines and circuitry feel so human.”

Kieran still lives and works in Belfast, a fact alluded to in Life Cycling’s artwork, a series of geometric designs by artist Al Kennington, but transmuted to that all-too-familiar Northern canvas: the unassuming gable of a terraced house. There, he raises two kids, produces his own records and has recently started branching out into other fields, such as the score for Prime Cut Theatre’s acclaimed play East Belfast Boy. Having resisted the draw of more traditional dance music hubs, he says he has no interest in living anywhere else.

I have a British passport but I call myself Irish if I’m anywhere that isn’t Northern Ireland, basically

“It’s where my family and friends are,” he says. “The beauty of it is you don’t have to be anywhere to be creative. You don’t have to live in Berlin or London or wherever. I love here, there’s a darkness to the humour, we are what we are. And, creatively, I like it because it’s not particularly cool or uncool, it’s just where I live and I get on with it. I don’t analyse it too much.”

Kieran’s worldly explorations were through the records that defined the early 1990s in dance music, specifically the more abstract and abstruse work of labels such as Warp Records and Basic Channel (“Early Black Dog, Autechre, Aphex Twin”), tracks that pushed sonic boundaries. “Things like that floored me,” he says, wistfully.

“They were life-changing records. Me and four mates just used to sit round and put a record on, the way other people do book clubs, and play it really loud and not talk ’til it was done. Nowadays, you’d just get shitfaced and party, with music as this secondary thing in the background, but we actually studied it, really listened to it. Had our minds completely blown. That was my youth. All I cared about.”

His first forays into producing music himself followed that same path, with perhaps slightly mixed results. “All during the ’90s I was trying to make that kind of music, Warp weirdness. I was obsessed with it but not getting any luck releasing it. I couldn’t seem to articulate or get a sound or a record together, and then I did a couple of live shows, when one track at the end had something people could dance to, and I was like, ‘Wow, people dance to my music,’ and my first releases came after that.

Credible artists now speak about marketing and strategy, and it does my f***ing head in

“The satisfaction of getting something coherent that people react to, when you use circuitry as a voice, as an instrument. Trying to do what is inside you is the longest journey. Those artists who can do it straight out of the blocks have my total admiration. For me it’s been a journey,” he says.

“A good career move is to find a sound that works and just keep at it. A lot of DJs speak about a career path. I didn’t get into this, when I first had my mind blown, it wasn’t a career path I had in mind. Credible artists now speak about marketing and strategy, and it does my f***ing head in. The whole point of art seems to disappear for a lot of people, and people you wouldn’t think are like that, but they are. They have it all worked out as a business thing. You can’t be truly artistic if you know what you’re going to be doing in a few years’ time. If you know what you’re going to be making in six months’ time, it’s a sign you’re not being truly creative or honest with yourself.”

So how does he keep working toward the next five albums he has lined up?

“I get motivated by hearing what other people are doing,” says Kieran. I ask if he means he gets so energised by amazing music that it gives him a new enthusiasm for the craft.

“No,” he tells me, emphatically. “I’m more like, ‘that’s shit!’ so I have a weird motivation to go, ‘what about this instead?’ I mean, if everyone just makes the same thing, all in a line, nothing is going to change.”

Life Cycling is released on December 1st on Maeve Records