Paul Simon: Farewell and thank you to a near mythic troubadour 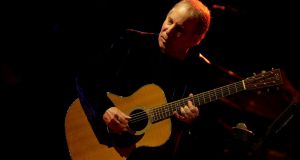 Paul Simon: the most subtle of cerebral US singer-songwriters performs for the last time in Ireland at the RDS, Dublin. Photograph: Vincent West/Reuters

When the opening chords of Paul Simon’s beautiful elegy America soar out one last time this evening across the RDS arena in Dublin, emotion, memory and a very real feeling of gratitude to a near mythic troubadour, will immediately unite a socially, possibly even politically, diverse audience of all ages.

Let us be lovers, we’ll marry our fortunes together.

It seems an anthem of hope yet uncertainly ultimately emerges as the central thesis.

Written in 1968 in the aftermath of the assassinations of Martin Luther King and Robert Kennedy, the song was also influenced by liberal opposition to the US involvement in Vietnam.

Simon, a master guitarist, is the most subtle of cerebral US singer-songwriters; his near contemporary and counterpart, Bob Dylan, less than five months older, has always been edgier, that bit more openly cantankerous when protesting and is possessed of a harsher sound honed on the American folk of Woody Gutherie. Simon certainly admired Dylan and was influenced by the Everly Brothers.

He is a singular character, son of a college professor-musician father and English teacher mother. He has a degree in English literature – though he did experience a miserable semester as a law student but soon retreated back to books – yet has never seen his image-rich lyrics as poetry.

He is astute, if dreamy; the wry, witty, self-doubting romantic, an East Coast intellectual, a witness of modern America at war with itself and yes the sort of guy who would be reading Robert Frost and “noting our place with bookmarkers/ That measure what we’ve lost/ Like a poem poorly written/ we are verses out of rhythm.”

The wistfulness and longing have always been there – Song for the Asking from 1970 encapsulates this yearning: “This is my tune for the taking/ Take it, don’t turn away/ I’ve been waiting all my life”. It is an integral part of the appeal of an extraordinary body of work defined by inherent musicality.

There is also the loneliness and the anger of the human condition; “Lincoln Duncan is my name/ And here’s my song, here’s my song….Holes in my confidence/ Holes in the knees of my jeans/I was left without a penny in my pocket…”

It was Simon, on the 1966 album Parsley, Sage, Rosemary and Thyme, who juxtaposed Silent Night with a news bulletin reporting on the Vietnam War.

Simon’s work is melodic, harmonic and rhythmic. He responds to music on a cohesive level, venturing into African – so brilliantly on Graceland – and South American as well as English folk traditions, which is interesting for a writer whose feel for language is so assured.

He has always been a close reader of the poetry of Yeats, American modernist Wallace Stevens and Philip Larkin. 1n 1988, he collaborated with the great Saint Lucian poet and playwright Derek Walcott on The Capeman, a musical play based on a Puerto Rican gang member who murdered two teenagers in a Hell’s Kitchen park in 1959.

Simon has a special affection for Seamus Heaney and he wrote a gracious tribute for The New York Times when the poet died.

It was because of Seamus Heaney that I finally got to meet Paul Simon, who was participating at a celebration of the poet’s life at the National Concert Hall in April 2014. There was a reception afterwards and I kept watch for Simon who came in late, his habitual expression wary and he braced himself to enter a room loud with conversation.

“So here we are,” he said to me and I blurted out lamely, “Today is Shakespeare’s birthday.” Simon considered this carefully, “And so it is.”

This was not an interview though, it was a chance to meet a hero and I seized it, blundering on, telling him I was writing a novel and, in it, the girl sings April Come She Will at her mother’s funeral. Was that okay? I asked. Did I need permission? Paul Simon laughed and said not at all. “But thank you” and he gave a little bow before asking how I knew Seamus Heaney.

He is deliberate, always listening, like a very clever bird. He seems more like a Japanese Zen master than someone who was born in Newark and grew up in Kew Garden Hills, a middle class area of Queens. We ended our conversation with agreement on a Big Three of Irish poets: Yeats, Kavanagh and Heaney.

Years earlier when I met Art Garfunkel, a very different person, funny and playful, and caustic, he had said; “You will like Mr Simon, girls always do, he is…um...” – a long pause – “intense and sort of soulful….he has these big, sad eyes.”

Simon wrote the songs across the five Simon and Garfunkel albums. While Garfunkel’s distinctive high tenor stamped its mark on Bridge Over Troubled Water, Simon’s more restrained, sweet, mid-range voice has a mellow tone and appealing clarity. Their harmonies are part of the history of popular music.

He wrote so many classics, and not just as part of one of the most famous duos in musical history: The Boxer, Only Living Boy in New York, Bridge Over..., Homeward Bound, The Sound of Silence, The Boy in the Bubble, Old Friends, 50 Ways to Leave Your Lover, Wartime Prayers, Father and Daughter. Anyone, even the most reticent of individuals, who has ever been at a Simon concert will have probably joined in and danced on the spot to the liveliest of invitations: You Can Call Me Al.

This nervy, quiet little New Yorker who has written many of the most enduing songs of the past 50 years; songs which defined a particular kind of America, and human, experience, is by nature an introvert. Nevertheless, he gives of his every atom in performance; generous to his audience and always appreciative of the response. A Paul Simon concert is special; it is communal because the pleasure is undercut by emotion and the familiar sound of songs which have become ingrained in us and and part of our collective memories. It is difficult, for instance to mention Mary Robinson, former president of Ireland without humming Simon’s Mrs Robinson.

Yet again America will make many people tonight in Dublin weep tears of recognition and identification, the sharing of emotion – now more than ever; as many, not merely Americans, are wondering what has happened and how we can ever again begin to “come look for America” now that the old welcome, that strange innocence which was peculiarly American, a New World innocence, has been betrayed on so many levels.

On November 20th 2016, hours after being told that writer William Trevor had died and writing a tribute to a person I had often wished was my father, I managed to rush to Dublin where Simon was in concert. It seemed fitting as Trevor had been there all my reading life and Simon’s music has proved far more than a soundtrack.

Everything Paul Simon ever wrote and recorded is contained within my otherwise classical music library. I know all the words; I can sing all the songs, badly. The Boxer was the first tune I played on a guitar. Thank you Paul Simon; thank you for a farewell tour concert, you are Homeward Bound, graciously deserving of it, and what a contribution you have made. Thank you; two small words and far too small for what you have given in songs and music that endure and will live on.

Married life on the road: a tale of two vagabonds
5