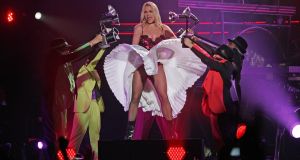 Former Fiery Furnaces singer Eleanor Friedberger is one of those rarities in whatever it is we’re calling pop music these days. In the days of Fiery Furnaces, which she co-founded with her brother Matthew, and which has been on hiatus since 2011, she worked on stylistically odd albums with interesting concepts (2005’s Rehearsing My Choir featured the siblings’ grandmother narrating stories from her life). Since going solo, however, Friedberger has balanced her askew view of song-arranging with incisive lyrical observations that touch on memory and equal measures of human dysfunction and harmony. Gig of the week, we reckon. TCL

This all-day session in Connolly’s of Leap is so big that it’s going to spill out from the bar to the outside. Calling in Bantry’s The Hanley Brothers, Rosscarbery’s Kieran O’Sullivan and Clonakilty’s Kyle Daniels to tend to the decks, there will be disco, funk, house and techno tunes to feast on. In the Disco Chowder Area (excellent name), the Cork-based DJ collective County Vinyl will be stacking up songs to fuel your daytime and nighttime boogie. LB

Regular visitors to Ireland, the Glaswegian duo of Optimo (Espacio) are back. DJs Twitch and JG Wilkes are the lads responsible for opening Pure, Glasgow’s first techno club, which then became the first club in Europe to book the likes of Jeff Mills and Richie Hawtin. When they founded Optima back in 1997, they wanted a club night where any song could have a chance on the dancefloor. Removing almost all music snobbery, anything goes here. LB

“When I die, don’t cry. Come drink rum and dance to celebrate my life.” That’s what the crew behind Disco é Cultura want you to do on their last-ever party in The Bernard Shaw. With Brian Cross (aka B +) and Jeremy Murphy and Mick T-Woc in charge of the music and packing the vinyl, expect a love-in of their favourite Afro, Brazilian, Latin American and Caribbean tunes to give Disco é Cultura the send-off it deserves. LB

Following a four-year Las Vegas residency (at the Axis theatre, Planet Hollywood Resort & Casino) with her “Piece of Me” show, Britney Spears finally brings it across the Atlantic. With plaudits from various quarters (it was pronounced Best Production Show by the readers of the Las Vegas Review-Journal) and a hit rate that’s almost off the chart, you can expect upwards of 90 minutes of acutely managed songs (about 25, of which some reviewers have written the words “lip-synching”), ooh! aah! costume changes (about 10), precisely choreographed dancers (about 15), and all the glitz (gazillions) you can wish for. TCL

Is Australia’s Rolling Blackouts Coastal Fever just another indie rock band that can’t stretch beyond borderlines of genre? A rock act that will shine brightly and quickly but soon burn out like so many others? Or – as The Irish Times claimed when reviewing their debut album in June – does the band “combine wistful melancholia with bright and breezy pop and a divine guitar riff”? Certainly, this venue will be rammed with people eager to find out which way the wind might blow. What’s certain is that anyone with a hankering for a mix of The Go-Betweens and The Vaccines will be well serviced. TCL

Shh . . . Diam! are Malaysia’s first openly queer band and they deliver surf rock songs that pack a punch. Even though they’ve since moved away from Malaysia, due to the difficulties that trans women face there, they are still actively involved in promoting LGBT+ rights in their home country. Out promoting their second album Eat Your Local Fruits, which you can listen to on sshdiam.bandcamp.com, they will be joined by Dublin groups Girlfriend and Timethieves. LB

Oh, dear, we have been here before, and we will likely be here again, but for some years there have been levels of uneasiness in seeing Brian Wilson perform. While the backing musicians who perform one classic Beach Boys song after another are flawless in their interpretation and delivery, the same can’t be said for the man who, all those years ago, wrote such timeless tunes. Wilson’s engagement with the present seems, let us say politely, out of focus when he isn’t singing, which is difficult to ignore even when the music is sublime. It’s a game of two halves, then, with surely even the most avid fan conflicted. TCL

If you don’t recognise the chosen name, then perhaps the real name will lodge something in the memory banks. Now in her mid-20s, Greta Kline – the daughter of actors Phoebe Cates and Kevin Kline – has been slowly but steadily gaining a foothold in the music industry over the past 10 years. Glad to say that her third album, Vessel, released several months ago, is racking up the plaudits. If your thing is indie alt.pop/idiosyncratic singer-songwriter, then climb aboard. Special guest act for all shows is Dublin indie group Squarehead. TCL

The memory and music of Jeff Buckley continues to hold the attention of many people and, as the anniversary of his debut album Grace continues to be celebrated (it was released on August 23rd, 1994), it comes as no surprise whatsoever that a batch of Dublin-based musicians will take to the Whelan’s stage to perform songs from that album and others associated with it. Expect a very special evening with a sprinkling of very special guests. TCL

Icelandic singer, songwriter and musician Jófrídur Ákadóttir is a multi-tasker. While she is intrinsically connected to the group Samaris (which, to date, has released four albums), her equally important solo project is JFDR. Described as a “music wunderkind” by the Reykjavik Grapevine magazine (as well as having been recently awarded Icelandic Artist of 2018 by the same publication), Ákadóttir returns to Ireland for these three rare intimate shows, each of which is worth your time and attention. TCL

Turning personal conflict and disaster into creative auto-fiction isn’t too much of a rarity, but when the writing subsequently inspires music of real worth, then it’s time to perk up. That’s what writer Zach Williams did when he picked up the guitar to relate his experiences by writing diary entries, and subsequently songs, about his wife’s temporary disability following a horse riding accident. Aligned with such emotions is Americana/roots music that No Depression magazine described as “enduring art with genuine heart and heartache, where lesser creations settle for mere melodrama”. TCL

It used to be just one body behind this Irish music act, but over the past year or so, David McGeown has added musicians to his music, which mixes robust guitar lines with evocative, earworm-like sonic themes. Last year ended with the release of six-track EP Soak; this show is the launch for Bodies’ new single, Limbs (I know, you couldn’t make it up, could you?), which is taken from their forthcoming debut album, Drench. TCL

Slum Village were one of the most influential hip-hop groups in Detroit throughout the 1990s with the line-up of T3, Baatin, who passed away in 2009, and J Dilla, who died in 2006. Now they’re a duo: T3 is joined by Young RJ, and they will be running through three decades of songs, as well as material from The Lost Scrolls Volume Two, a collection of previously unreleased demos and remixes from the original line-up. LB