Shirley Manson: ‘I’m still a work in progress and a shambling mess’

The Garbage frontwoman on her Dublin cancer scare, imposter syndrome, and her first 25 years in the business 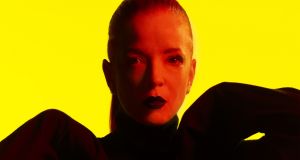 Most acts speak fondly of playing in Ireland with eulogies on Guinness and the roar of an adoring crowd, but for Garbage singer Shirley Manson, this little island has a very different association. After Garbage launched a world tour for their second album, Version 2.0, in Dublin on January 14th, 1999, Shirley Manson found a lump on her breast the following morning. Manson required a biopsy, but the surgery team couldn’t get a needle in the lump. Eventually, she received successful treatment in the States, after nerve-wracking weeks of fearing the worst.

“I still have a very nasty scar across my left breast as result of the last time I visited Dublin,” Manson says. “I feel it every day. I always think of that moment, and I’ll never forget it. It was an interesting experience to get a scar on a part of your body that for women is supposed to be a totem of beauty and sexual potency. I learnt a very interesting lesson very early on in my career, so in some ways, I am grateful for it.”

Garbage were alt-rock royalty in the 90s, selling 17 million albums and becoming a high-rotation MTV sensation, thanks to the singles and videos for Vow, Only Happy When it Rains, and Stupid Girl. Apart from briefly and quietly disbanding during the making of their fourth album, Garbage have remained recording and touring over the last two decades.

“I actually feel that this is the most glorious part of my career,” Manson reveals. “I now realise that for a band to stick together and to tolerate one another for more than twenty years is some kind of miracle, and the fact we’ve managed to stumble through is in itself a rarity. I also feel incredibly privileged to be still making music after all this time. It’s the most surreal thing that’s ever happened to me. It feels much more surreal than when we initially arrived. It’s really wonderful.”

Today, Manson is speaking from her home in LA. During the band’s early career, she constantly undertook gruelling commutes from her native Edinburgh to the States on Garbage business. “I was ruminating on this just yesterday,” she says. “The beginnings of my career were very difficult. I was terribly unhappy. My first marriage broke down as a result. I was physically and mentally taxed. I started to make decisions to make my life easier to manage, more pleasant and rewarding, so moving to LA was a natural decision. I knew the band wouldn’t survive if we were so dispersed.”

While she misses her native land, she visits home regularly. “I feel very connected to Scotland, ” Manson affirms. “It is where my family, history, and meaningful past remains, but I’m not overly sentimental about any place in the world. Everywhere is incredible once you dig in. Los Angeles is where I am for the time being and I just have to get on with it. There is no point feeling broken-hearted about not being at home. I miss it and I’m always happy to come home. If I stay in LA for any more than three months, my husband claims that I start to behave strangely, so he insists that we go home for a bit. I regenerate, and then I’m ready for another three months. Strange as this might sound, I actually miss the Scottish climate, because the wildfires in California are incredibly intense right now. I got into my car yesterday and it was 110 degrees. It feels like being in the jaws of hell.”

In July, Manson wrote a piece entitled ‘The First Time I Cut Myself’ for the New York Times; a highly moving and personal account of self-harm and imposter syndrome. “As I’ve gotten older I’ve realised that I like to feel,” she says. “I like to feel sadness and I like to feel joy. I can sit in disappointment and pain and I can examine these feelings. A lot of my friends always called me crazy, but now I can look back on my life and go that I’m pretty fucking together. Meanwhile, all the pals who called me crazy have had a tumultuous rollercoaster of a life and great trouble holding it together. I was never crazy. I was just OK with feeling.”

Manson has learned to utilize imposter syndrome as a double-edged sword. “I confess that I still have a thread of it,” Manson says. “It still pulls through my existence. I cannot possibly put myself on the same plane as Patti Smith, or PJ Harvey, or Dolly Parton, or any of these artists. The fact that I get some love in a similar fashion seems ludicrous to me, but imposter syndrome has also been very helpful. It is a great engine and motivator. As unpleasant as it has been to live with a sense of unworthiness, it has propelled me forward and pushed me to try and always be a better singer and performer. I’d love to sit down with Patti Smith and ask her if she ever felt like an imposter, but I suspect that she didn’t and is an alien who came down to earth fully formed. I’m not a fully formed person at all. I’m still a work-in-progress and a shambling mess.”

Manson has spoken out on the lack of diversity on festival bills in recent. While this year’s Electric Picnic is certainly much better than most, she doesn’t think that this in itself deserves praise. “I’m not going to commend a festival for doing the right thing and doing the modern thing,” she says. “Festivals that are not getting on board with diversity are old dinosaurs who are way out of touch. The fact that festivals have been so slow to change their attitudes to minorities offends me. If I had a festival that didn’t represent trans artists, non binary, black, coloured, and a whole range of artists, I’d be highly embarrassed. There is no excuse whatsoever for not having women on your bill.

The misogyny towards women is astounding, and it is not just coming from men by the way, it is coming from other women a lot of the time

“By the way it is not just festivals,” Manson continues. “This is a systematic, endemic issue that faces everyone on the planet. The misogyny towards women is astounding, and it is not just coming from men by the way, it is coming from other women a lot of the time. There is a horrendous misogynist view of female artists, and it has to change. I’m really hoping that festivals will shoulder up to their social responsibilities. It is bullshit that people don’t want hear from women. That is just blame bullshit. It’s a mad cycle. If you exclude women, of course they will continue to be excluded, and at some point, somebody has to do the right thing. I hope that festival runners all over the world will take note and do something about this disparity.”

After Electric Picnic, Garbage will tour Europe, the United States and Mexico. Manson is looking forward to band’s second quarter of a century. “I’m 51, and soon to be 52, so I think a lot about my future and how it can roll,” she says. “Again, I go back to my heroes. People like Patti Smith or Debbie Harry, who are women in their 70s who continue to be vital artists. Whenever I feel blue, or despondent, or a bit scared about the possibilities of continuing to be an artist, I defer to them. If I continue to produce good work in song, music or writing, then I can have a creative life. That’s all I want now. I have zero interest in impacting the charts. It is an enjoyable thrill, but it means absolutely nothing to me right now. The excitement and adventure comes from pushing myself forward.”

The Old(er) Guard at Electric Picnic

The Prodigy
Scientists have confirmed that in the event of a nuclear war, The Prodigy will still be headlining a main stage somewhere in world with Keith Flint declaring that he is the fire starter, twisted fire starter.

Ash
One of most iconic 90s single covers is Ash’s Kung Fu EP; featuring Eric Cantona karate kick a Crystal Palace fan at Selhurst Park in 1995. The Downpatrick trio have had 18 Top 40 singles in the UK.

Gomez
What do you mean you thought they’d split up? Even though the Southport band might come across as the types to think nicking a traffic cones is a great jape, they remain very much a going concern, and took the roof off the Olympia last April.

Mavis Staples
Gospel and blues singer Mavis Staples has moonlighted as an actress and activist, collaborated with Arcade Fire and Gorillaz in recent years, and claims to have turned down a marriage proposal from Bob Dylan.