After five albums, Wild Beasts mark their break-up with a new record and three ‘farewell’ gigs, including a Dublin concert 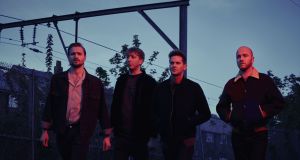 On November 19th, 2016, after the last date of their world tour ended in Mexico City, Wild Beasts sat down and had a conversation about splitting up. “By the end of any tour, you’re both psychologically depleted and your body is starting to fail you; team spirit is an important factor,” recalls co-frontman and songwriter Hayden Thorpe. “So it wasn’t really until the last night that we were able to address and put a name on that elephant in the room. But,” he adds, importantly, “it was a conversation of love and respect.”

After announcing their decision to the world last September, the four-piece – Thorpe, his co-vocalist and bassist Tom Fleming, drummer Chris Talbot and guitarist Ben Little – reconvened just before the new year. The location? The ‘local caff’ in their Lake District home town of Kendall, famous for its mint cake and now for spawning one of the most defiantly offbeat, forward-thinking and exciting bands to come from the UK in the past 30 years. From the quirky art-pop bumble of their 2008 debut Limbo, Panto to the heavy distortion of 2016’s Boy King, they were defiantly, brilliantly and consistently original over the 15 years they have been together.

“There was some kind of beautiful symmetry to that – that was the arc of the story, right there,” Thorpe agrees of their final confab. “That we should by coincidence all be home for Christmas, and have that conversation about turning off the machine, as it were . . . I remember I was struggling to speak that day. I mean, as a singer, a lot of my emotional projection comes through the voice, and I was struggling to say the words ‘Bring it to an end’.’’

There was no sudden bolt of lightning that triggered the four-piece’s decision, Thorpe says, calm and rational about the impending dissolution of the band he grew up in. “I’d say it was one of those aches that gets more and more prominent. It was a dull ache. There wasn’t any huge combustible scenario, really; there wasn’t really any ‘Big Bang’ moment. It was just a case of slowly edging our way towards a junction. Our lives have been in synch with one another for 15 years, and that’s remarkable in itself – for even a romantic relationship or the greatest love. So there was a sense of our synchronicity coming up for question, and we either had to get back in sync – which meant recommitting and probably saying our vows again for the foreseeable future, or not renewing our vows and I would say probably euthanising it at a point where it was still at its most athletic and prime, I guess. I don’t think we would have ever wanted to have our band to be at anything other than its fullest.”

They are most certainly going out on a high. Few bands leave behind such an impressive back catalogue, with five superb albums – all different in their own way – under their belts.

The most recent, Boy King, was released in 2016 and saw the foursome force their way into the more synth-led sound that had been firmly established with 2014’s Present Tense. Along with a final run of three ‘farewell’ gigs – one of which is in Dublin – they’ll release an album that will act as their swan song. Last Night All My Dreams Came True is a ‘Greatest Hits’ of-sorts that was recorded live over two days at London’s famous RAK Studios last year.

“It was a strange day, I remember,” Thorpe recalls of the mood in the studio. “Because we were match-fit, we thought we could just fly through it and record it all in a couple of hours. But I had a lot of nervous energy, so I decided to ride my bike to the studio. It’s a good two-hour bike ride, so by the time I’d cycled across the city and inhaled a good lungful of pollution, I couldn’t quite sing.

“But in many ways, it felt like our domain. My happiest memories with the band and some of my happiest memories in life have happened in the studio, where you know you are creating something that will outlive you – and you know you are building a world for yourself to live in. That is some of the most life-affirming and beautiful sensations you can have; that you’ve made something bigger than you. I think we were always at our best in the studio – I think that’s why we were always so desperate to get back into it.”

He says he has “no idea” how it will feel to take his final bow with the band that has defined much of his life and his personal identity.

“I mean, you don’t know the temperature of a bath until you stick your foot in it, it could be scalding hot, or it could be freezing cold – I’m not entirely sure,” he laughs. “Certainly, it’s as significant a breakdown in a relationship as any. I feel like I’ve been married to three men for 15 years, and the loss of the gang, of the family, is a sad prospect. Yet I’m walking away knowing that we were an incredibly dynamic and creative band, unlike any other, who made records that don’t sound like anyone else. And that’s something I feel hugely fortunate and proud to have been a part of – and I wouldn’t change a thing. So I feel the decision is so right – so any sense of sadness or grief is also balanced with this appreciation for having worked with the best musicians and the best people I know for so long.”

The biggest question is, what next? Are various solo projects on the cards? A long holiday? A temporary (or perhaps permanent) disappearance into obscurity?

“At the moment, the wilderness suits me quite nicely,” Thorpe chuckles. “I think it’s important to be off-grid for a while; all the full-stops in my life thus far have come from albums so I’m not in any significant rush. I write and I sing through compulsion, and the music is a by-product of that need.

“So we’ll see – Wild Beasts are still a thing, it has to this date been an all-consuming love affair, and it remains so until February 17th, so it’s like saying ‘How will it feel after Doomsday?’ I have no idea. As for the other guys? Yeah, I think we’re all moving towards new lives.

“There’s a real sense of renewal and a real sense of opportunity. We’re still young men, and we have lived, in some ways, quite unconventional and strange lives. So there is a ‘coming out into the world’, a sense of leaving the gang and going into witness protection, changing your name, finding a new city and just taking it from there. That’s a precious adventure. Not a lot of people get to start again.”

He is diplomatic, too, about how Wild Beasts’ back catalogue might be treated by future generations. Surely at some point, I say – 30 years down the line, when your influence is more keenly felt – there’ll still be time to headline Glastonbury, if it’s still around.

“I think our records do stand up,” Thorpe says, pausing for a moment. “I think we will still sound like us in 20 or 30 years’ time, and I don’t think there will be another band like Wild Beasts. I don’t think there was another band like Wild Beasts before. And how history writes us is not up to us; only time will tell what echoes of our work reflect in the minds of future bands and listeners. But we’ve made our little dent in the universe, and that is all I can ask.”

Limbo, Panto (2008) I think it’s the bravest and most audacious it could be. I think it was a kind of feral cry of acknowledgement; of colour, of life, of difference, amongst – at the time – what felt like a ‘four lagers and a packet of crisps’ kind of time for music. I’m proud of that.

Two Dancers (2009) Two Dancers opened up the world for us; that was an album that changed my life. That was when we learned how to make records – we learned what it was to be an artist on that record.

Smother (2011) It has Loop the Loop on it, which I think is probably our best recorded song. If you consider that album was written and recorded within six weeks, it really is a very true expression. There was no double-thinking that record; it’s all heart.

Present Tense (2014) I think that is probably our most accomplished record – I think it’s probably got a bunch of our best songs on it. Personally, I’ll probably always be drawn to that one; it’s our most dynamic and the album that contains all of us, if you will.

Boy King (2016) I think it’s an incredibly powerful and guttural record. It’s ugly, in a lot of respects, and that’s what I kind of love about it. It’s brutal, it’s unflinching.