Mango & MathMan: ‘It’s okay to be from Dublin and talk like this’ 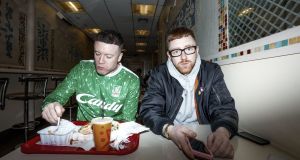 Producer Adam Fogarty and rapper Karl Mangan, aka Mango & Mathman: “We know that this is going to be a big year. We want to do it right, we want to do it down to precision.”

“It used to be that it was ‘good enough’ – ‘Ah yeah, they’re good for Irish lads.’ We’re like: F**k. That. S**t.” Karl ‘Mango’ Mangan is detailing his ambitions over a pint of Guinness in the Long Hall pub on George’s Street in Dublin, while the producer Adam ‘MathMan’ Fogarty nods. “Better pull up your socks, it’s time to grow up boys,” Mango raps on Forgot About Me, a track on their EP Wheel Up.

Mango & MathMan – Mango the MC, MathMan the producer – emerged from from the hip hop collective The Animators. But as a duo, they’ve clicked with a vibe in the capital few homegrown rap, hip-hop or grime acts have before. Ireland’s rap fandom is intense, murals are painted in honour of Stormzy, for crying out loud. Before, Irish rap was often old-fashioned in its musicality – all throwback beats and rudimentary rhymes – but that’s changing rapidly.

Legging it through the middle of this burgeoning scene is Mango & MathMan, who connect dots that feel so obvious once they hook up: the grittiness of a grime stickier than Temple Bar’s cobbles on a Sunday morning, lyrics that speak to and of the city, the energy of raves, and a chest-thumping underdog pride in where they’re from.

After small, intense gigs in 2017, lauded festival performances, and Mango emerging as the unlikely star of Electric Picnic, performing in front of thousands as one of the MCs at the RTÉ Concert Orchestra’s Story Of Hip Hop show, they released Wheel Up, five tracks built to blare out of phones, car stereos, and house parties everywhere.

‘We want to do it right’

“The tunes caught on and the gigs were really well-received,” Mango says, reflecting on the previous year, “Everyone was like ‘these gigs are f**king great’. So more people booked, more people got into it. We were very conscious that, 2018, ok, this is great, but we can’t just start shooting in the air and see if something hits. We have up to the end of the summer mapped out for us. We know that this is going to be a big year. We want to do it right, we want to do it down to precision.”

On February 3rd, they perform at the National Concert Hall as part of the Imagining Ireland concert. That show then goes to the Barbican in London in March. They were recently announced for Life Festival at Belvedere House in Westmeath in May. Part of this planning includes the astute decision to be managed by Not Another Agency, primarily a modelling agency, one which is strongly connected to youth culture in the capital.

“I just think Ireland is now ready for it,” MathMan says, “We have talked about the psychology and the culture of Ireland right now, being very proud of who you are, being proud of your identity and the voice that you use as an Irish person… having a voice as a young person in Ireland, but [also] having a voice and being proud of your accent, and all of the idiosyncrasies that come with being an Irish person.

“[Conor] McGregor has had an awful lot to do with that. How he’s represented himself on an international stage, I think a lot of Irish people have looked at that and been proud of that. It’s ok to be myself. It’s ok to be from Dublin and talk like this.”

Mango agrees. “Having somebody like McGregor coming out and talking like us, unapologetically, for better or for worse of the character he is, it kind of shook up, especially, working class young fellas.” Mango talks about the meme-ification of Irish culture, referencing both Rubberbandits and Humans Of The Sesh, the satire and humour culminating in a “‘go on Ireland’ vibe.”

Inspired by the city

The tunes start with Dublin, MathMan says, “I get inspired by the city more than anything else in the world… the energy, the hope in the air, the attitude of the people, I just like to walk the city and get a bit of that, go home, and put that into the song. The very first part of the process is Dublin. Whatever it is about Dublin, it just runs through me.”

That intrinsic link between place and identity has always been at the core of rap. It’s no coincidence that in tandem with the growing indigenous and multicultural hip hop scene in Dublin, the spoken-word scene is also on fire. People are talking about themselves to great effect. The emergence of grime as the dominant youth culture in the UK, and it’s success in North America, presents one of the most important geographical shifts in rap’s history. If London can be put on the map in that way, why not Dublin? Mango & MathMan’s track Rapih (Selecta) has more than 100,000 plays on Spotify.

“We make grime music, right?” Mango starts, “and imagine if I went into the booth and I went in and put on some f**king Brixton accent to rap? What the f**k is that about? If you spell it out for people, it’s f**king weird. Your own your accent. The way we talk is so deadly. There’s people I listen to, whether they’re old-school Dubs, or stuff that young fellas are saying, they say the maddest shit, but I know what they mean when they say it. Why don’t we celebrate that? We’ve got a vehicle here. Ireland is famous for music and poetry and talking weird. Rap music is all of those things.”

MathMan concurs. “Do you know what the beauty of it is? In Ireland, Irish artists and Irish MCs are failing to realise that that’s our unique selling point to the world, that’s what will separate us. Sonically, hip-hop and grime music and anything within the urban genres are very homogenised. Sonics, palate and landscape are very similar no matter what country you go to. But immediately, you know when you hear [French rapper] MC Solaar. He’s on a boom bap record that could have been made in any territory in the world, but you know it’s Solaar. You know when you hear Wiley spit, it’s Wiley. When you hear Mango spit, you know it’s Mango. Our unique selling point as Irish artists is our voice, how we speak, the madness of that language, our f**king slang, all that shit. That’s our unique selling point to the world.”

There’s much more to Mango’s voice than an accent. There is a clinical flow, the kind that allows you to relax into it, bars skipping fluidly across the surface of a track like flat pebbles on a lake. There’s a lyrical prowess, insistent and dexterous. There’s a grizzly baritone that assumes authority and commands attention. This is from a guy who describes his working day on the stock-room floor of a shoe shop on O’Connell Street as, “I just go in, lift boxes, eat chicken fillet rolls and go home. That’s it.” MathMan works in RTÉ, the editor of two digital stations, 2XM and Pulse.

Musically, the songs bleed Dublin. The bed of Buzzin’ evokes the screech of cars doing donuts. North/Sound opens desolate, like the echo of a multi-story car park. The bounce of Rapih’ feels like someone being chased, heartbeat racing, hopping over a wall. And then there’s Got 2 Have It, with the swagger of McGregor entering the octagon, and the hectic atmosphere of the bumper cars outside the Oxegen dance tent, “I’m Dublin’s saviour / old school raver / worst behaviour / jaysus, pal, the f**kin’ state of ya.”

MathMan says he writes the best part of 15 or 20 tunes a week, a prolificness than Mango finds “daunting”. MathMan estimates Mango has close to 600 songs. “In my head, it feels like I’m constantly doing a crossword that never ends,” Mango says.

“Any young guys ask me for advice,” MathMan says with regards to making beats, “I say it’s very, very important you understand the maths behind frequencies and using sound in the right way. It’s not easy to master. If I look back on the shit I was writing when I first started, it’s embarrassing. But I loved it so much that I spent so much time working on the craft. This is no joke, I think I’m actually addicted to making music. If I don’t make a song or two songs a day, I don’t feel right. Not that I’m tetchy and I want to hit somebody, but it’s just a nice release at the end of the day, come home from work and start writing and expressing yourself in a creative way.”

The energy that their songs exude is infectious. It feels almost obvious to predict that their sets at festivals – although they might be on smaller stages – will be the ones people will be talking about this summer.

“Now that people are actually going ‘let’s listen to these guys’,” says Mango, “I’m going to make sure everybody in Ireland and everybody around the world can see what we’re doing, because I believe in it so much. I spent half me life believing in it, and worked me arse off, and sacrificed jobs, birds, relationships, friends, everything, even going to college. So I’m going to make sure while the sun is shining, we’re making a whole lot of f**king hay.”