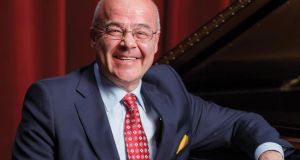 Alexander Toradze: His approach was to ignore all the music’s invitations to prattle in predictable patterns

Shostakovich wrote the piece for his son Maxim as a showcase for the 19-year-old music student on his first appearance with an orchestra. The work switches between jaunty charm and raciness in its outer movements and mines a vein of sweet sentimentality in its central slow movement.

It’s a piece that seems to have been written with an eye to easy gratification. It’s almost pampering in its approach, giving the soloist lines that can make an impression well beyond their technical difficulty and providing listeners with a spill-a-minute fairground ride.

It could be fairly said that it is designed to make players sound better than they are. And the delight of last Friday’s performance by Alexander Toradze with the RTÉ National Symphony Orchestra under Daniele Rustioni was that it did exactly the opposite. It made the piece sound much better than it actually is.

Toradze’s approach was to ignore all the music’s invitations to prattle in predictable patterns. Rather than follow the obvious rise and fall of the concerto’s lilt, his focus was on shapes of much longer reach, so that his playing offered something more on the lines of an argument than the easy flow this work often encourages.

The elements of unpredictability were wonderfully supported by the brilliance of the orchestral playing that Rustioni secured from the orchestra, and the luxuriant silken velvet hushes of the slow movement were also extremely impressive.

The performance of Tchaikovsky’s Fourth Symphony after the interval was full-blooded and sonically rich, though not always as tidy in detail as the Shostakovich.

The evening’s real curiosity was the opening work, the suite from Italian composer Goffredo Petrassi’s 1945 ballet Ritratto di Don Chisciotte (Portrait of Don Quixote). If the choice of Shostakovich’s Second Piano Concerto represents a negative aspect of orchestral life as a kind of museum culture – to take but one example, Ligeti’s major Piano Concerto from the 1980s is still awaiting a performance in Dublin – then the performance of a piece by a neglected Italian composer is definitely a positive one.

Petrassi, of course, does have an Irish connection. He was one of Irish composer Eric Sweeney’s teachers in the early 1970s, and it seems to have been as far back as 1971 when he last had an orchestral work performed in this country. That was the year when Irish flautist Patricia Dunkerley played his Flute Concerto with the RTÉ Symphony Orchestra (as it then was) under Albert Rosen at the St Francis Xavier Hall.

Petrassi’s Don Quixote portrait is in neoclassical style, and the subject gives scope for some moments of orchestral drollery. But there is a lot of neoclassical music that is really rather on the dry side, and this suite certainly falls into that category.

Its performance left me with a rather unusual question, one that may well also be exercising the consultants writing the report that will “put forward the optimal solution for the effective, efficient and sustainable delivery of high quality orchestral services by RTÉ.”

Given that there are far better orchestral works by Petrassi – not least the series of eight Concertos for Orchestra that he wrote between 1933 and 1972 – and given the nearly half century that has elapsed since he last had an orchestral work performed here, what is behind the artistic policy that delivers the audience at the National Concert Hall, as well as listeners on RTÉ Lyric FM, one of his lesser works?

The real question, of course, is probably much bigger even than that: is there, and has there ever been, a formal artistic policy governing the programmes of the RTÉ NSO and the RTÉ Concert Orchestra?

The dilemma of the horns

One of the key orchestral decisions made when RTÉ was setting up its orchestras was to recruit players from abroad rather than try to build up the orchestras entirely of local musicians. One of the players who took up a post here in the 1950s was the horn player Victor Malirsh, who was born in Maribor in Slovenia in 1928.

He was the principal horn player in the symphony orchestra when I started going to concerts. His beautiful, noble tone and rounded phrasing made a big impression on me. I managed to get a loan of an instrument from a friend and I took lessons from him at the Royal Irish Academy of Music for a while. There is nothing that will convince you of the treacherousness of horn playing better than trying to do it seriously yourself.

I still have fond memories of my lessons in the basement of the academy, not least for the strange see-through device he had made so that he could demonstrate exactly what was going on while you were trying to form your lips into the best shape to deliver the note that you wanted.

His teaching also sharpened my awareness of a range of rhythmic issues that stand out so much more clearly for horn players than they do for pianists – the piano had long been my main instrument.

Malirsh died two years ago at the age of 88, and his life and achievements were celebrated by his colleagues and family at the National Concert Hall on Sunday. I can imagine the delight he would have taken at the opening work, Rossini’s Le Rendezvous de Chasse, with the solo horn (Cormac Ó hAodáin) downstairs in the John Field Room swamped by the glorious warmth of massed horns from the balcony above.

It seemed entirely appropriate that one of Ireland’s best-loved musicians should have been the spur to bring together what must surely have been the biggest ever gathering of Irish horn players.