Here, as Martin Scorsese does with The Irishman, a great visionary takes stock 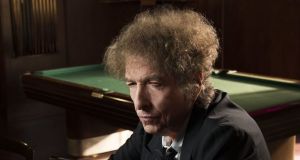 Bob Dylan: Murder Most Foul invites you to briefly set your woes to one side. Photograph: Heaven’s Door

“Soothing” is not the first word that comes to mind when we think of Bob Dylan. Yet there is something hugely reassuring about the now 78-year-old’s surprise new single. Landing in the middle of a pandemic, this weird, rambling lullaby casts Dylan as a purveyor of grandfatherly bromides. It isn’t explicitly about coronavirus. But its message that, though the world is violent and complicated, it is also lit up with moments of grace and beauty unfurls like a heritage-pop comfort blanket. It invites you to hug it close and briefly set your woes to one side.

Murder Most Foul is, at 16 minutes and 57 seconds, the longest track Dylan has ever committed to record (snatching the title from 1997’s Highlands and its perfunctory 16:31). It is also largely about the John F Kennedy assassination and the violent ripples that expanded outwards from that event, disrupting art, politics, music and cinema. And yet Dylan sounds uncharacteristically at peace, so that the music feels as if it is radiating outwards from a place of stillness at his centre.

He didn’t, it seems reasonable to conclude, knock it out in the past few days as he was adjusting to the Covid-19 lockdown. Whatever else Murder Most Foul is – and a 16:57 Dylan think piece obviously contains multitudes – it isn’t his response to Bono’s recent attempts to heal humanity from his spare room in Killiney.

John F Kennedy’s death was a rock smashed through the windscreen of American history. But on Murder Must Foul Dylan repurposes it as a prism through which to interrogate 20th-century popular culture

Dylan does, however, obliquely refer to coronavirus in a note attached to the record. “Greetings to my fans and followers with gratitude for all your support and loyalty over the years,” he writes. ‘This is an unreleased song we recorded a while back that you might find interesting. Stay safe, stay observant and may God be with you.”

What does “a while back” mean? Among hard-core Dylan fans – is there any other sort? – this has already fuelled enormous conjecture. Amateur carbon-dating of the gentle vocal style he affects on the tune has led some to conclude that it is significantly later than his most recent collection of new material, Tempest, from 2012. It may even postdate 2017’s Triplicate, his three-disc great American songbook covers project.

But whatever the provenance, this sprawling lullaby is clearly about the past rather than the present. Ambiguity is part of Dylan’s charm – sometimes even he seemed unsure what he was singing about – but that is not the case here.

“’Twas a dark day in Dallas, November ’63,” Dylan begins, against a gentle wash of strings and piano. “A day that will live on in infamy/ President Kennedy was a-ridin’ high/ Good day to be livin’ and a good day to die.”

Dylan has long had a fascination with the Kennedy assassination. Robert Shelton’s Dylan biography, No Direction Home, recalls how, three months after Kennedy was shot, the singer and his retinue took a detour along the president’s fatal final route in Texas. Dylan was not at all convinced Lee Harvey Oswald was acting alone.

“Everybody, including Bobby, started acting like a detective,” one of his companions told Shelton. “We look at that distant row of windows [where Oswald had shot from] and we all pretty much decided that if someone had shot Kennedy from that window he would have to have been a fantastic marksman.”

Kennedy’s death was a rock smashed through the windscreen of American history. But on Murder Must Foul Dylan repurposes it as a prism through which to interrogate 20th-century popular culture. He chucks it all in, starting with the arrival in the US of The Beatles. (Gerry and the Pacemakers receive an improbable nod too.) There are references to the silent-movie star Harold Lloyd and to the mobster Bugsy Siegel as well as to The Eagles, Fleetwood Mac and Marilyn Monroe.

But it’s his rumination on the death of the 1960s dream and the souring of hippy idealism that bites deepest, especially his evocation of The Rolling Stones’ disastrous 1969 concert at Altamont. “I’m going to Woodstock, it’s the Aquarian age,” he sings. “Then I’ll go to Altamont and stand near the stage.”

If Murder Most Foul has a contemporary parallel it is Martin Scorsese’s most recent movie, The Irishman. That film saw one of the great visionaries of his generation taking stock and looking back. Dylan is doing likewise here, though with a humility and generosity of spirit that run contrary to his persona as pop’s perpetual awkward customer. The song is strange and meandering but also comforting. Kennedy died, the United States was knocked off its axis, and yet life went on. Today, more than at any point in the past 60 years, there’s something deeply heartening in that insight.