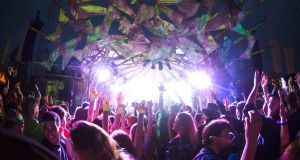 Body & Soul: the Irish festival is still working on the basis that this year’s festival, at Ballinlough Castle in Co Westmeath, will go ahead on June 19th-21st

Irish music promoters are holding their nerve and continuing to plan for festivals and concerts this summer in the wake of yesterday’s decision by Glastonbury to cancel its 50th-anniversary festival, in the UK in June, because of coronavirus.

Avril Stanley, director of the independent Body & Soul festival, at Ballinlough Castle in Co Westmeath, says: “While we may not have the answers, nor the ability to see into the future, we are at this juncture preparing for the 11th edition of Body & Soul to take place as planned.”

The team behind the festival, a midsummer event on June 19th-21st, is monitoring the public-health situation “and will take whatever actions necessary to ensure our community is safe and healthy. We hope we’ll all be out the other side of this by June, in which case you have our absolute promise that we’ll deliver the best summer-solstice celebration this country has ever seen.”

Glastonbury would have agonised over whether to abandon its plans. Its sheer scale – it is the world’s largest greenfield music and performing-arts festival, with more than 200,000 people coming to Worthy Farm in Somerset – means it has to start its preparations particularly early, so had to make an equally early decision about whether to cancel this year’s festival.

Its build would have begun in April for an event on June 24-28th. That early build does not apply to Irish events. Last year 40,000 people attended Longitude in Dublin, promoted by MCD; Body & Soul last year had a capacity of 10,000.

Among other big music events coming up in early summer are Forbidden Fruit, at Imma in Dublin on May 30th-31st (promoted by Pod), Live at the Marquee in Cork (Aiken Promotions, from late May to late June) and The Killers at Malahide Castle (MCD, June 16th and 17th).

Promoters might find that events are being taken out of their hands by performers decisions’ as well as by Government public-health measures. Nick Cave & the Bad Seeds announced today that they are cancelling their European and UK tour, which was to have included dates at 3Arena in Dublin on May 8th and 9th.

“While hugely disappointing, this feels the best course of action to keep you all as safe as possible,” Cave’s management said in a statement. All existing tickets will be valid for the rescheduled shows, the dates of which have yet to be finalised.

Other artists have already rescheduled their 3Arena shows. Pussycat Dolls have switched from April 5th to November 2nd; Paul Heaton & Jacqui Abbott have moved from April 10th to November 6th; RuPaul’s Drag Race: Werq the World has jumped from May 17th to August 30th; and The Who have moved last night’s postponed concert to March 5, 2021.

MCD, which is Ireland’s biggest concert promoter, last week postponed shows due to take place before March 29th in response to the Government’s ban on large gatherings but said original tickets for all affected events would be valid for rescheduled dates.

Last night the company said the Government, health authorities and the Garda “have requested that organisations and citizens desist from speculating on and more importantly circulating the potential impact of Covid-19”, and it urged people to “act responsibly and deal with actual facts to avoid exacerbating the worry and anxiety that is currently overwhelming so many citizens across Ireland at this time”.

The Taoiseach and Tánaiste have both urged the public not to share unverified information about the Government’s coronavirus response.